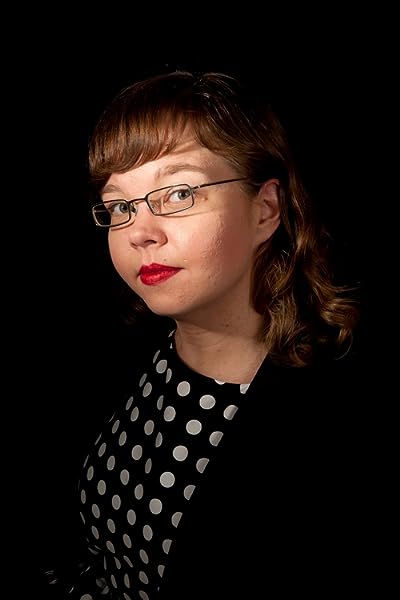 by Salla Simukka (Author)
3.4 out of 5 stars 22 ratings
Book 3 of 3 in the Snow White Trilogy Series
See all 5 formats and editions Hide other formats and editions
Read more Read less
Inspire a love of reading with Prime Book Box for Kids
Discover delightful children's books with Prime Book Box, a subscription that delivers new books every 1, 2, or 3 months — new customers receive 15% off your first box. Learn more.
click to open popover

The final story in the thrilling Nordic crime series The Snow White Trilogy, an international success published in 52 territories worldwide and soon to be a Hollywood film. 'Fans of Nesbø and Larsson won't be disappointed' Publishers Weekly Secrets turn to poison in this YA Scandi crime thriller where Lumikki Andersson must uncover a dark personal truth to outwit her murderous stalker. . . Lumikki has a new boyfriend - easygoing, gorgeous Sampsa - but she is unfaithful in her dreams, longing for the electrifying touch of her ex, Blaze. Then the threats start arriving, from someone who seems to know Lumikki intimately. Sharing her fears risks deadly consequences, so now she is more alone than ever. When Blaze suddenly reappears, Lumikki is torn. She can't deny the chemistry between them, but can she trust him? To stop the killer, Lumikki must uncover a dark secret that has haunted her family for years. AS BLACK AS EBONY is the final dramatic chapter in the thrilling, contemporary 'Snow White' trilogy by award-winning author Salla Simukka.

mocobe
5.0 out of 5 stars Two thumbs up
September 2, 2015
Format: Kindle EditionVerified Purchase
I have loved this trilogy. I'm actually sad to have gotten to the end. I've been kept on my toes through most of it. I would recommend this book if you like mystery.
Read more
One person found this helpful
Helpful
Comment Report abuse

Nenia Campbell
TOP 500 REVIEWERVINE VOICE
4.0 out of 5 stars An empowering Finnish YA mystery with a strong female protagonist
July 13, 2019
Format: PaperbackVine Customer Review of Free Product( What's this? )
I requested an ARC of this book because I thought it was related to Nele Neuhaus's SNOW WHITE MUST DIE, which is a German murder mystery with Snow White themes. The two books are unrelated, however; AS BLACK AS EBONY is a young adult Finnish mystery by Salla Simukka about a girl named Lumikki with Snow White themes. Apart from the Snow White themes, and the mystery elements, the two books are very different and don't have that much in common, just FYI.

AS BLACK AS EBONY is apparently the third book in the series, and while I did feel like I was missing some information, I could easily read it as a standalone. Lumikki has just returned back to Finland from Prague after a terrible disaster befell her old school. She was able to help avert disaster, and has taken up with her old Finnish art school, acting as the lead in a feminist retelling of Snow White called The Black Apple, and dating a dreamy boy called Sampsa who's the perfect boyfriend with the perfect life.

Someone is stalking Lumikki, now, though. Someone who claims to know a lot about her life, including a dark secret about her family that not even her parents will tell her. This person, who calls himself (or herself) the Shadow intends on running Lumikki around, like a rat in a maze, until they are ready to make their move and reveal themselves to her as a paramour-- but if she tells anyone about the letters, she is warned, the night of the play will end in blood.

I was super impressed by AS BLACK AS EBONY. The mystery element was done well and there was no shortage of suspects for the stalker. (And no, I didn't guess who it was-- a plus.) Lumikki is an engaging heroine who is clever but also weary; she appears to have suffered a lot over the course of the trilogy, and is ready to just be left alone and live the ordinary life of a high school student.

Also, I just want to appreciate how sex positive this book is. Lumikki's relationship with her boyfriend is portrayed as totally natural and normal, and there's no shaming or jealousy or cattiness between Lumikki and any of the girls. Also, Lumikki's ex-boyfriend is transgender and their break-up was because he wanted his space to think about his transition, and not due to any bigotry. She also uses the correct pronouns for him, even when talking about him pre-transition, and it was very respectful and correct (and something that a lot of U.S. books fail miserably at). The rep there was well done, and I really appreciated that and wish more U.S. books were the same.

I really enjoyed this Finnish YA thriller and am interested in reading more by this author.

Thanks to the publisher for sending me a copy in exchange for an honest review!

E.M. Bristol
TOP 1000 REVIEWER
3.0 out of 5 stars "I know everything about you."
September 12, 2018
Format: PaperbackVine Customer Review of Free Product( What's this? )
When I was growing up, Sting had a hit song called "Every Breath You Take," which at first sounds romantic, but the more times you listen to it, becomes exceedingly creepy: it's essentially a creed for stalkers. In an interview, Sting claimed that more than one person has told him that they've used "Every Breath You Take" as their wedding theme song - I would guess that such couples would really go for "Black As Ebony," the final book in a trilogy that updates "Snow White" for modern day Finland. The protagonist is a high school senior called Lumikki who, like many heroines nowadays, seems inundated with suitors, whether of the blah nice guy variety or the semi-creepy, or, in the case of whoever keeps sending her uber-icky texts ("I've been watching every move you make and every expression of your face.") a genuine predator. Like most in her position, Lumikki doesn't even have to really do anything to be considered attractive to virtually every guy she interacts with - like the "Twilight" girl, acting perpetually morose, dreamy and suffering from past trauma that she can't remember are major turn-ons. But while Lumikki has some major problems - such as dissociating when she's rehearsing for her school play (incidentally "Snow White"), she can't go to the authorities because the stalker warns that if she does, things will get even worse. (Although the reader may be justified in wondering how much worse they could possibly get.) So who's this creeper, how can Lumikki escape his clutches, and also, why does Lumikki keep having weird visions of a little girl called Rosa? Can she figure it all out, even without professional help before something really bad happens?

Thoughts: I hadn't read the first two books in the trilogy and would have appreciated a little more backstory, but I assume most readers won't have this issue. I also really would have liked to know how she could afford her apartment when she didn't appear to have a job or any source of disposable income, but maybe parents paying for this stuff is common in Finland. Overall, the writing was uneven - in many places, it read like fanfiction, but perhaps if I'd read the two prequels, I might have enjoyed it more.
Read more
Helpful
Comment Report abuse

P. Zack
VINE VOICE
1.0 out of 5 stars Every YA trope known to man, and a stupid and unrealistic plot
April 14, 2019
Format: PaperbackVine Customer Review of Free Product( What's this? )
Hey, I don't want to spoil this for those that, um, might actually want to hang in there until the end of the book. I read a lot of YA fiction, mainly because I have teens and work with teens and am always trying to find good books for them. This is NOT a good book. In fact, despite the fact it tries to be "edgy", the result is stupid, far fetched, and unrealistic. Yeah, I know, what YA literature is "realistic"? By realistic, I mean that within the framework of the novel, the things that happen should seem possible, even likely, given the story structure and the situation. This one throws things in there out of nothing, and resorts to the convenient and stupid bad guy... (no spoilers, but.... really? Can't do better than that"?). I don't usually toss books in the trash, but this one when out in the dumpster this morning. Hard pass.
Read more
Helpful
Comment Report abuse
See all 22 customer reviews
Write a customer review