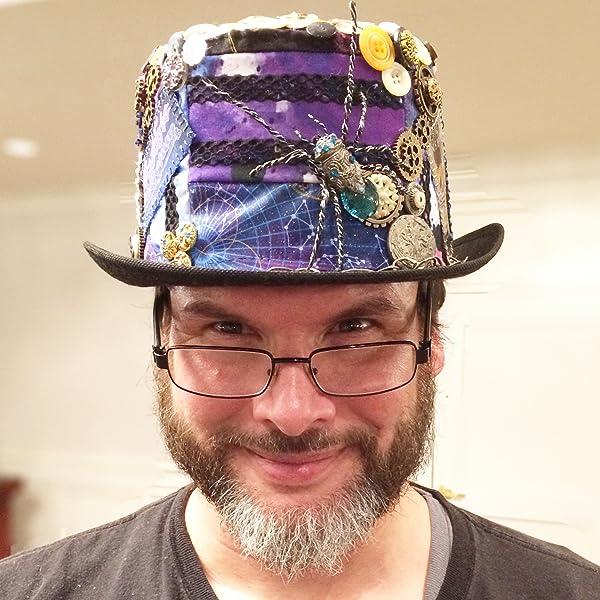 Writer and poet Mike Allen is the Nebula Award nominated editor of the CLOCKWORK PHOENIX anthologies and the digital journal MYTHIC DELIRIUM. His newest books are the short story collection UNSEAMING and the novelette THE SKY-RIDERS, the latter co-writen with his friend Paul Dellinger. Read more about Mike's work at http://descentintolight.com and follow him on Twitter at @mythicdelirium.

Start reading The Black Fire Concerto on your Kindle in under a minute.

Autumn Canter
4.0 out of 5 stars Action Packed
Reviewed in the United States on September 1, 2013
Verified Purchase
This is a work of dark fiction done in three acts and set in a post-apocalyptic world ravaged by magic.

The heroes are a pair of musicians that begin the tale in typical roles-- mysterious bad ass and young victim. Developed over the coarse of the story (back stories expertly revealed and woven into the building tension) the reader is exposed to the heroes strengths and weaknesses while they fumble their way through control of a dark magic that had already mutated the face of a changed world.

Gory, violent, and action packed--with fox-people, zombies and lingering technologies-- this little book put its hooks in and keeps you reading to the last page. An excellent way to stimulate the imagination. Visually rich, it reminded me of a well built role-playing game or D&D campaign.

Jeremy Holmes
4.0 out of 5 stars A Mesmerizing, Blood and Guts Fantasy
Reviewed in the United States on February 16, 2014
Verified Purchase
Mike Allen weaves a phantasmagorical tale of dark fantasy in a post-apocalyptic world of magic and, well, lots of dismembered body parts. The novel straddles the line separating horror from fantasy: there is magic, which Allen conceives of and explores as a kind of music, its lyrical quality a jarring counterpoint to the scenes of terror and necromancy that form the major setpieces of the novel. Allen's protagonists and villains are all interesting, fully fleshed out characters that avoid the worst of the fantasy tropes that other authors can fall into. Allen's imagination is vivid, original, and sometimes shocking, creating an interesting twist on horror-fantasy that shouldn't be missed.
Read more
2 people found this helpful
Helpful
Comment Report abuse

Heather Brush
4.0 out of 5 stars a slightly sinister fantasy
Reviewed in the United States on August 16, 2013
A girl plays a harp while waiting to die a horrible death upon a ship; it's a hauntingly beautiful way to begin a book, but knowing author Mike Allen, it isn't surprising. His first novel, "Black Fire Concerto" is a slightly sinister fantasy, out of this current world's realm.

Erzelle, the harp girl, gets hooked up with Olyssa, and becomes her apprentice, assistant, and duet accompaniment. The goal is to find Olyssa's sister who has become one bitch of an evil witch, and rescue her from the dark side. The method of fight-power is in the notes played; the two become a force of power by using their music to create magic, destroy magic, and hopefully save the world.

Ever since "the Storms," the world has become a very different place. This is not a typical post-apocalyptic after-life tale though. Now, most people are ghouls, not quite zombies, not quite aware of anything, but undying nonetheless. Other people try to eat the ghouls in order to garner the everlasting. Besides that, there have been mutations of animal and human, change in the physical world and various alterations that are much beyond the vast genetic modifying that currently goes on in reality.

The characters are strong and deep, full of inner turmoil and conflict, leading the reader to care about them. The plot thickens considerably and turns often, giving a wild fantasy ride. That said, I needed just a tad bit more reality to hold on to. The emotions of the characters held me in, but a little more grounding would have made me happier. Although, the reanimated bits of flesh crawling around and teaming up in various forms of ghoulishness was fun and sweetly dark to me.

Allen has a talent for the descriptive, and an imagination that is downright scary. Of course, to him, that's a compliment.

Mieneke van der Salm
3.0 out of 5 stars Fantasy of the darkest kind
Reviewed in the United States on July 24, 2013
The Black Fire Concerto is author Mike Allen's debut novel, though he's previously published short fiction and poetry and has edited several anthologies including the successful Clockwork Phoenix series, which is currently up to its fourth instalment. The book began its life as a novelette and was extended to be a full novel, something which is reflected in its division in three parts. I had a bit of a mixed reaction to this book. While I enjoyed its protagonists, I was a little surprised by the fact that this was (to me) a zombie novel in disguise. I'd noticed the reference to the ghoul-infested riverboat in the blurb, but I hadn't realised that ghoul equated zombie and that they would play such a large role in the book. As regular readers of my blog know I'm not a zombie fan, they genuinely freak me out, so I had some trouble with some of the descriptions in the book.

The Black Fire Concerto shone in its world-building. It's a post-apocalyptic United States, which due to a calamity called The Storms has been altered to be almost unrecognisable. In this new reality magic seems to have returned to the world, along with an infestation of ghouls and the creation of new, changed peoples, plants, and wildlife. The magic in the book is interesting as there is an almost evil connotation to it, not just in the way the villains of the book use it, but even in the way it affects Olyssa and Erzelle. I also really liked how Olyssa and Erzelle accessed the magical force through music. The newly made species of the vulpines was well thought-out, they were my favourite part of the book--well, together with the magic flying horses. Allen really builds a believable culture for them and I really enjoyed the time we spent with them. I wasn't a fan of the ghouls, as explained above, and the various necromantic machines constructed from body parts. They were creepy and some of the descriptions Allen gave of them are more horror than fantasy and I really didn't like them, though that is obviously a quite personal thing. They were quite well-written and I could see people who like horror really appreciating them.

I liked the development of Olyssa's character and the relationship with her sister, but I would have liked to learn more about Erzelle's family. We learn relatively little about her background, just that her mother was a musician, her father an accountant and that they flew out of Minnepaul in a jet. Then again the lack of a background might be the point, seeing how young she was when she got stuck on the Red Empress. Her lack of knowledge leaves an opening to explain a lot of the world's building blocks to both her and the reader, but at the same time makes her decisiveness and practicality a little unbelievable, especially at her age. Erzelle is twelve, at least she thinks she is, but she doesn't come across as such at all. Olyssa, on the other hand, is very much developed. We learn her history, how she's come to be on her quest - both through what she tells Erzelle and the memories she shares with her - and while at times she seemed a little over-secretive, we do learn a lot about her emotions, especially in the last part of the book. I found the dynamics of the relationship between the sisters quite powerful and Olyssa's difficulty in coming to terms with what has become of her sister and dealing with the consequences felt quite genuine.

The Black Fire Concerto was a well-written book, though clearly more episodic in nature than a continuous narrative. The overarching storyline, that of Olyssa's search for her sister and the need to stop the ghouls, is very much resolved by the end of it - and in a satisfying manner - while still leaving plenty of room for Allen to return to this world and these characters for further stories. While I liked the book and definitely saw its merits, in the end the ghoul action put me off quite a bit and made it hard to read at times. Allen shows himself a skilful writer and I'd love to read more of his work, but in a different setting. However, if you enjoy dark fantasy and zombie-esque monsters, The Black Fire Concerto will be right in your wheelhouse and this slim novel might prove an unexpected delight for you.

The book was provided for review by the author.
Read more
3 people found this helpful
Helpful
Comment Report abuse
See all reviews

Hobbitish
4.0 out of 5 stars Creepily good!
Reviewed in the United Kingdom on August 25, 2014
Verified Purchase
I really enjoyed this book. It was a little strange and definitely on the dark side - reminded me of Tim Lebbon's writing. There were a few spelling and grammatical errors that stood out a little but they were negligible really. An evocative, creepy and often disturbing tale of magic gone awry.
Read more
Report abuse
See all reviews