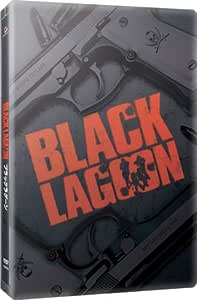 Episode 2
Mangrove Heaven
After a particularly horrific gunfight, the crew escapes with their hostage Rokuro "Rock" Okajima. However, they are chased down by a helicopter gunship and forced into running up a river and straight into a trap. Facing certain death at the hands of hardened mercenaries, Rock comes up with a plan that is so insane that it might work.

Episode 3
Ring-Ding Ship Chase
Rock begins his new life as a Black Lagoon Crew Member and begins to learn that the world he has entered is full of hurry up & wait moments. While the rest of the crew awaits their orders, Dutch walks the beat and runs into a rival boss out to recruit the Black Lagoon to his side of the fence. Things get ugly when a small fleet of pirates out for blood interrupts an ordinary job. Revy's dark and brutal nature is revealed as she jumps ship and lays waste to their enemies.

Episode 4
Die Ruckkehr des Adlers
The crew is hired to retrieve a priceless painting aboard a sunken German U boat. However, the only one who has any Scuba experience is Rock so guess who gets to tag along on this dangerous retrieval mission? As Revy and Rock descend into the depths of the sunken U boat, Dutch and Benny fend of an unwelcome gang of neo Nazis who want the painting for their own nefarious needs.

The action-adventure series Black Lagoon (2006) marks the ongoing confluence of Japanese and American filmmaking. Rokura Okajima, a minor flunky from the powerful Asahi Corp, thinks his life is over when he's kidnapped by pirates while acting as a courier of secret information. It's only his career at Asahi that ends: he joins pirates as "Rock." The trio of Dutch, the understated leader; happy-go-lucky techie Benny; and trigger-happy Revy becomes a quartet. They're less pirates than soldiers of fortune, ready to do anything if the price is right. Dutch, Benny, and Rock are fairly typical anime characters and form a credible team. But the over-the-top Revy throws the show out of whack. Captain Jack Sparrow would blanch at her casual murders and potty-mouthed insults: She's about as engaging as a rattlesnake in an Easter basket. Although it's based on a manga by Rei Hiroe, Black Lagoon feels like a cartoon version of a Hollywood blockbuster. Extremely violent and very profane, Black Lagoon is not for the squeamish or easily offended. (Unrated, suitable for ages 17 and older: violence, profanity, grotesque imagery, alcohol and tobacco use, Nazi imagery) --Charles Solomon

Black Lagoon was animated by Madhouse, with sponsorship from Geneon Entertainment. Expect this one to throttle the previous track record of lackluster reception for coproduced works. While its level of violence is a substantial liability in finding a high profile spot on North American television, Black Lagoon is ready to weigh in as a serious contender for supplanting Cowboy Bebop's audience. By out Hollywood action-ing Hollywood action and setting a tone that is neither ponderous nor disengaged with the state of the world, Black Lagoon is an aesthetic success. --Scott Green, Ain't It Cool News

spacetimeflux
5.0 out of 5 stars great underdog
Reviewed in the United States on July 20, 2007
Verified Purchase
I already saw the entire series in subs. This has great action and style, kinda reminds me of beebop except a bit down more hardcore. Overall it's a great series that will delight fans of less childish anime.
Read more
Helpful
Comment Report abuse

TC13
5.0 out of 5 stars better than US TV
Reviewed in the United States on September 26, 2007
Verified Purchase
Another outstanding, if mildly silly example of Japanese anime. Violence of a stylized neo-noir flavor, many a bullet fired, some heaving bosoms, bad behaviors all around.

More plot and character development here than in 95% of the television released in the States.

Amazon Customer
4.0 out of 5 stars In a criminal underworld just out of sight
Reviewed in the United States on April 4, 2007
I don't even recall how I first heard of Black Lagoon. Having watched the series on YouTube, I was hooked from the first episode. The animation is stunning, especially the beautiful shots of the South China sea. This disk contains one of my favorite parts of the series, from the beginning of episode one, where we meet Rock and see the life he escapes from, to the beginning of episode three, when we first see Rock "on the job" and attempting to reason with the freight ship until Revi uses an RPG in her own particular method of persuasion.

Black Lagoon teases us with a world so close to our own that we are never quite certain if we are dealing in supposed reality or not. Though the city of Roanapur doesn't really exist, it very easily could under another name, it seems, and the geographic locations are mostly accurate. Back stories set in real history (such as the Soviet invasion of Afghanistan) provide a realistic setting for some of the characters as well. Weapons depictions are also almost startlingly accurate.

On the other hand, the use of those weapons and the capabilities of the characters often reminds us that we are indeed watching an anime, with various characters (mostly female) who are able to wield their choice of weapons with nearly supernatural finesse and ability.

It's all in good fun, and the series isn't afraid to poke fun at itself, while sometimes thoughtfully raising questions of moral perspective.

There is some mature content, which while often unnecessary is also part of the criminal underworld backdrop that is reinforced throughout the series.

These are not nice people, they live by violence and crime. Yet still we develop an unshakeable attachment to them: The capable and dangerous Balalaika; the murderous, hot-headed, yet somehow endearing Revi; the reluctant but ultimately courageous Rock; and many other characters, developed to varying extents but all interesting.

I look forward to the rest of the episodes being released.

Like everything else, this series has its flaws, but is intense, compelling, and ultimately satisfying.

Saetanigera
5.0 out of 5 stars Highly Recommend
Reviewed in the United States on December 20, 2009
This is one of the best action animes with two solid seasons so far. I'd also recommend Darker Than Black and Basilisk if you are interested in animes with a similar serious tone and great storytelling.
Read more
Helpful
Comment Report abuse
See all reviews from the United States
Pages with related products. See and discover other items: Russian Five Movies