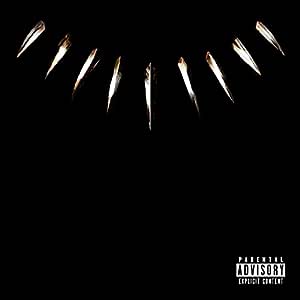 Save with Used - Good
$11.04
FREE Shipping on orders over $25.00 shipped by Amazon.
Arrives: Saturday, Jan 30
Ships from: Amazon
Sold by: Prime Goods Outlet

Black Panther The Album Music From And Inspired By

Kendrick Lamar The Weeknd SZA & 0 more Format: Audio CD
4.7 out of 5 stars 973 ratings
Amazon's Choice recommends highly rated and well-priced products.
Amazon's Choice for "black panther soundtrack"
See all 4 formats and editions Hide other formats and editions
Includes FREE MP3 version of this album.&nbspProvided by Amazon Digital Services LLC. Terms and Conditions. Does not apply to gift orders.&nbspComplete your purchase to save the MP3 version to your music library.
Available at a lower price from other sellers that may not offer free Prime shipping.

4.7 out of 5 stars
4.7 out of 5
973 global ratings
How are ratings calculated?
To calculate the overall star rating and percentage breakdown by star, we don’t use a simple average. Instead, our system considers things like how recent a review is and if the reviewer bought the item on Amazon. It also analyzes reviews to verify trustworthiness.
Top reviews

Henri Savin
VINE VOICE
5.0 out of 5 stars Kendrick Lamar is really the greatest, not only at rapping but at producing too....
Reviewed in the United States on July 17, 2020
Verified Purchase
I have been a fan of Kendrick Lamar since I discovered him with “Good Kid, MAAD city”. I bought everything he put on the market since because of his writing skills, his rapping and production skills and how he portrays himself in general.
I went with a friend to watch Black Panther and I remember pointing out to him every time I was hearing Kendrick…So I was bound to buy this album too.
Let’s be clear, this is not the real soundtrack of the movie, more an album based on that theme.
Now onto the tracks, 5 stars stand for a favorite of mine, 4 as a track I would never skip, 3 stars I am fine with it but I may still skip it sometimes, 2 stars I did not like, 1 star I hated:
1- Black Panther (Kendrick Lamar)
This track is a typical Kendrick song. Very much reminiscent of the album To Pimp a Butterfly. Not very musical but well written as usual. 3 stars.
2- All the Stars (Kendrick Lamar $ SZA)
One of the most played song of the album, the singing of SZA is very well complemented by Kendrick’s verses. Excellent! If my memory is correct, that song played in the theater. 5 stars.
3- X (Schoolboy Q, 2 chains, Saudi)
Surprisingly, even if Kendrick’s name is not mentioned, he is in the chorus and the intro of the song. Good catchy rap with good featuring. 4 stars.
4- The Ways (Khalid, Swae Lee)
Could have been called “Power Girl”. I am not a fan of DJ Khalid but I have to admit that this is an excellent track with reggae roots. Swae Lee’s voice is perfect for this song. Kendrick participates as a backup vocalist). 5 stars.
5- Opps (Vince Staples, Yugen Blakrok)
This track is very intense with rolling bass, syncopated music and rap styles. Good featuring again. 3 stars.
6- I AM – Jorja Smith
Trippy track. One of my favorites in the album. Kendrick really has the talent to surround himself with good artists, most of them I had never heard of before. Slow song, with good dense bass and Jorja Smith delivering a song reminiscent of ‘Miss Dynamite” for those who may know her. Love the violons at the end of the track with samples rolling from one hear to the next. 5 stars.
7- Paramedic – SOB X RBE
LA music by excellence…Lots of bass, good rapping… A good track to play in your car with bass making your car vibrate crazily… 4 stars.
8- Bloody Waters (AB-Soul, Anderson PAAK, James Blake)
TDE in the room with Ab-Soul. I love this guy. I am glad that Kendrick is not forgetting his TDE buddies (AB-Soul, Jay Rock, Schoolboy Q). AB-Soul shines with this type of production. Excellent sung chorus. 4 stars.
9- King’s dead – (Jay Rock, Kendrick Lamar, Future, James Blake)
This track is reminiscent of the album DAMN. Excellent flow from Jay Rock (A killer, remember Money tree?). The instrument are almost all percussions and infra-Bass and it put on display the amazing rapping skills on it. The track changes dramatically in the last minute for Kendrick’s verses. 5 stars.
10- Redemption Interlude – Zacari
Musical part with aery lyrics by Zacari… Very reminiscent of The Weeknd. 4 stars (Yes, even interludes are amazing!)
11- Redemption – ( Zacari, Babe’s Wodumo)
One of the most upbeat tracks of the album… Zacari has such a nice voice. Also one of the most African sounding track of the Album. 4 stars.
12- Season – (Mozzy, Sjava, Reason)
First song of the album with non English lyrics (Not sure which African language it is). That track is low paced with a mix of English rap and African singing. The production reminds me of “Fear” from the Damn album (one of my favorites of all times). 5 stars.
13- Big Shot – (Kendrick Lamar, Travis Scott)
I love the way Kendrick uses music I would never expect in a Rap Album. The effect is puzzling but good. I would have loved to see the face of Travis Scott when he first heard it. This track is one where Kendrick is the most present. Travis Scott proves his rapping skills very well in this track. 4 stars.
14- Pray for me – (The Weeknd, Kendrick Lamar)
- I discovered the Weeknd at about the same time of Kendrick Lamar. I really appreciate the musicality of both and I am happy that they cooperated to deliver this killer track. The production sounds much more like The Weeknd than Kendrick when you start listening and then Kendrick’s voice comes in and then I realize that Kendrick can make his any song with a killer voice and lyrics… 4 stars.
In conclusion:
Kendrick Lamar is one of the only artist that I can grab a CD of and let it play without considering skipping songs. This album is the same. You can put it on and let it play and enjoy every track.
5 stars!

TheScaryClownsKeepMeUpAtNight
5.0 out of 5 stars Wow!
Reviewed in the United States on November 30, 2018
Verified Purchase
What an amazing soundtrack. I've listened to this, beginning to end, almost every day for the past two months. IMO it has a flow that shouldn't be interrupted, which is one of its strengths. It has taken over as one of the best soundtracks in my library; a slight step above the first Guardians of the Galaxy soundtrack (I know, two very different soundtracks). This one is very much Hip-Hop so if you don't like the genre then move on...but if you do, then this is a must!
Read more
9 people found this helpful
Helpful
Report abuse

Rosa E. Burgos
5.0 out of 5 stars King of Marvel Soundtracks
Reviewed in the United States on April 17, 2018
Verified Purchase
This is the best Marvel soundtrack so far! I love the production and writing Kendrick Lamar did with himself and the featured artists. My favorites are "Oops", "All The Stars", and "Pray For Me". The songs were fitted perfectly into the film as well.
Read more
12 people found this helpful
Helpful
Report abuse

High Chief
4.0 out of 5 stars Future is not needed
Reviewed in the United States on March 1, 2018
Verified Purchase
This is a well crafted soundtrack with only a few missteps. Overall it is a very enjoyable cd but I would have preferred that Kendrick was more than just a phrase on some songs. A couple songs he literally just says "Black Panther" once at the end or he is just on the hook or bridge. This album could have benefited from a few cutting room floor altercations including removing Future's incoherent 8 bar "verse" on King is Dead. The SOB cut lightly featuring Kendrick seems forced & lacks any lyrical versatility. I would have much preferred hearing Kendrick trade bars with Anderson Paak or pretty much anyone else on what could have been a monumental track. I would still recommend purchasing this album as a whole because the good far out ways the bad.
Read more
27 people found this helpful
Helpful
Report abuse

Chiti Kaunda
5.0 out of 5 stars An amazing line up of artists and great musics.
Reviewed in the United States on January 4, 2019
Verified Purchase
I love soundtracks as much as the movies sometimes. This is the case for this soundtrack which has an amazing set of artists. Composed primary by Kendrick Lamar, these songs are so dope and bring you back to the core parts of the movie.
Read more
3 people found this helpful
Helpful
Report abuse

Welles
5.0 out of 5 stars Fantastic
Reviewed in the United States on August 10, 2018
Verified Purchase
I superb album that features a number of great songs. Even months after its release I find myself revisiting it just to hear its awesome collection of great artists and songs.
Read more
2 people found this helpful
Helpful
Report abuse
See all reviews

S. Baker
5.0 out of 5 stars Evocative.
Reviewed in the United Kingdom on March 28, 2018
Verified Purchase
I've pretty much had this on constant rotation since I bought it. A lot of thought went into the lyrics which are designed to be in keeping with the characters of the film. For example, The King is Dead is a very passionate breakdown of the character of Killmonger (even if I don't completely agree with the interpretation.). Well worth buying. FWIW, original score is really good too.
Read more
3 people found this helpful
Report abuse

baldyman
5.0 out of 5 stars Quality
Reviewed in the United Kingdom on May 20, 2019
Verified Purchase
Arrived on time, as description
Read more
One person found this helpful
Report abuse

Sneaker Freak
5.0 out of 5 stars Five Stars
Reviewed in the United Kingdom on March 7, 2018
Verified Purchase
Love this. Just waiting for the ORIGINAL soundtrack score to be released.
Read more
2 people found this helpful
Report abuse

BadgerLover
3.0 out of 5 stars Good for the £3 something I paid for it
Reviewed in the United Kingdom on July 23, 2020
Verified Purchase
The album itself is ok , it's obviously only my opinion but I think there is two good tracks on the album. The film itself is very good but soundtrack is ok
Read more
Report abuse

#mixtapesforgirls
5.0 out of 5 stars Technically a Kendrick Lamar album
Reviewed in the United Kingdom on June 19, 2019
Verified Purchase
14 tracks. Not a single throw away. Easily the best original soundtrack in the MCU.
Read more
One person found this helpful
Report abuse
See all reviews