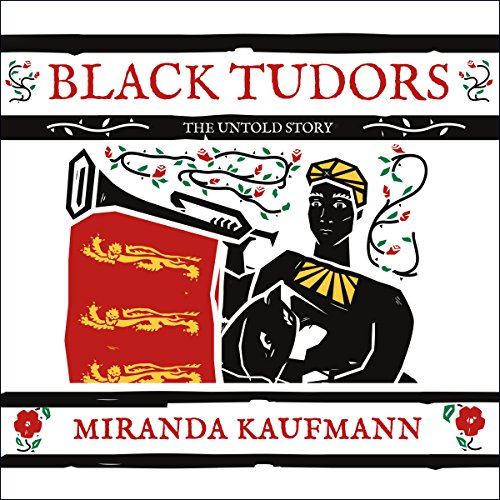 List Price: $24.95
You Save: $3.12 (13%)
By completing your purchase, you agree to Audible’s Conditions Of Use
Sold and delivered by Audible, an Amazon company
Share

4.6 out of 5 stars
4.6 out of 5
581 global ratings
How are ratings calculated?
To calculate the overall star rating and percentage breakdown by star, we don’t use a simple average. Instead, our system considers things like how recent a review is and if the reviewer bought the item on Amazon. It also analyzes reviews to verify trustworthiness.
Top reviews

santa cruz woman
4.0 out of 5 stars unexplored history
Reviewed in the United States on September 21, 2020
Verified Purchase
if one watches historical pics, the tudors, elizabeth 1 it is easy to get the impression blacks born in europe or africa were only slaves. this discusses the lives of those many who were free workers as musicians, sailors, officials, businesswomen etc. i wasn't aware that in the time of england's henry 8 is was high fashion to have african looking musicians in your court orchestra. some were from africa, others moslems from morocco etc. the man she discusses appears in a portrait and his petition asking for a raise and promotion is shown. slaves in the new world are q
uoted as wishing they could get to england where there is no slavery and 1 made it and sailed with sir francis drake. a master who wanted his slave to work was told by a court he can't be forced to stay and serve. a woman dies and leaves an estate including the cow. it is history not taught in school and was written so well that i couldn't stop reading it. it also includes color repros of art showing africans including the musician. would make an excellent gift and there is a bibliography for those who want to read more.
Read more
7 people found this helpful
Helpful
Report abuse

S. Bryan
5.0 out of 5 stars This is a MUST for a History Buff!!
Reviewed in the United States on November 16, 2017
Verified Purchase
This is the first time I have real actual information pertaining to Blacks in England during the Tudor dynasty. I think anyone would benefit from this book, I just purchased it in Kindle form and I will now pick it up as a hardcover as well. I highly encourge reenactors to pick up this book as she explains what colors and fabrics that were around.
Read more
14 people found this helpful
Helpful
Report abuse

Melinda
5.0 out of 5 stars Gives a more accurate picture of Tudor England and also the rest of the world.
Reviewed in the United States on January 22, 2018
Verified Purchase
Excellent book, very readable and well documented. Kaufmann gives a good overview of Tudor period history as well as specific examples of the integration of black immigrants into English life (and life in other countries). She shows how our current concept of race shapes our perception of historic relationships.
Read more
9 people found this helpful
Helpful
Report abuse

Courtney Smith
5.0 out of 5 stars Great Book
Reviewed in the United States on February 21, 2021
Verified Purchase
This text is a perfect a starting point for research this topic. So very interesting and detailed in its conveyance of black life in Tudor England.
Read more
Helpful
Report abuse

Donise
4.0 out of 5 stars A great effort to inform about the lives of every day people in Tudor times
Reviewed in the United States on December 18, 2017
Verified Purchase
This book is well written and very interesting. It contains a lot of information on the Tudor time period. Unfortunately, she tries her best to give you information on the Black Tudors but apparently there is scant information. The most important point she makes is that in the 16th century, the prejudice against blacks had not begun in England.
Read more
4 people found this helpful
Helpful
Report abuse
See all reviews

Theo1
1.0 out of 5 stars Disappointing on the topic being written about.
Reviewed in the United Kingdom on September 28, 2018
Verified Purchase
The book was extremely disappointing on historical detail about black Tudors though the book purports to be about that very topic. It is largely padded out with historical detail about other people and events - largely the sort of stuff we get on those 'light' historical programmes on TV. I learned very little from it and was surprised that the reviews printed on the cover and inside the book - praised the detailed research of the writer. There was far too much surmise and imagining of events that 'might have' taken place.
Read more
67 people found this helpful
Report abuse

Mac McAleer
4.0 out of 5 stars An excellent recovery of a forgotten history
Reviewed in the United Kingdom on January 9, 2018
Verified Purchase
This is an excellent book. It recovers the lost history of Africans in England during the reigns of Henry VIII through Elizabeth I and James I (who was a Stuart not a Tudor). These Africans had the same freedoms and constraints as everyone else in the kingdom, dependant not on their colour but on their skills, position in society and wealth. Some may have been servants, but they were never slaves. It was only later when the English became seriously involved in the African transatlantic slave trade that the perception of Africans changed, but English law never recognised slavery in England.

The author, Miranda Kaufmann, has split the book in ten chapters. Each chapter concentrates on an historical figure and gives the known facts about them and the environment in which they lived. Sometimes the known facts are few; sometimes much more is known. Thus, the discussions are often as much about the Tudor world as about the black Tudors themselves.

The book’s genesis is in the author’s research for a doctorate, but it never feels academic. However, it does have an extensive bibliography and notes on the text. There are several colour plates.

The first character is John Blanke, who was a trumpet player in the court of Henry VIII. He is found in the royal accounts for the various payments to him. His image can also be seen in the Westminster Tournament Roll where he is painted with his fellow trumpeters, the only one with a dark skin and wearing a turban. This image is reproduced in the book. Next is Jacques Francis of Southampton, but with Venetian connections. He was a salvage diver employed to recover valuables from the wreck of the recently sunk Mary Rose. The third chapter concerns Diego, a slave of the Spanish in Panama, who escaped and sailed with Sir Francis Drake. On future voyages, Drake brought more Africans to England, including Edward Swarthye, who later became a porter in Gloucestershire and is the subject of chapter 4. Then there was Reasonable Blackman, a silk weaver in London, followed by Mary Fillis from Morocco, who was a seamstress in London. Chapter 7 concerns Dederi Jaquoah, the son of an African king, who lived in London for two years as a guest of a merchant trading with West Africa. John Anthony was a former pirate living in Dover. Anne Cobbie was a prostitute in London. The final chapter discusses Cattelena of Almondsbury who owned a cow, which provided her livelihood.
Read more
35 people found this helpful
Report abuse

Andrew Fontenelle
5.0 out of 5 stars Black Tudors
Reviewed in the United Kingdom on December 28, 2017
Verified Purchase
"Black Tudors: The Untold Story" by Miranda Kaufmann does an excellent job of highlighting the African presence in Britain during Tudor times. With a few exceptions, we know little about their lives since just their names and ethnicity is all that has been recorded about them. But the fact that they were present in numbers large enough to be noticed, means that British history needs to be viewed in a different light.

I was lucky enough to attend a presentation by Onyekaa at the National Portrait Gallery in London in 2015 on the Black Tudor presence. And having read his book (Blackamoores: Africans in Tudor England, Their Presence, Status, and Origins) on which his presentation was partly based, this book complements it nicely.

Based on the content, the author has obviously done a significant amount research and I would certainly recommend reading it.
Read more
23 people found this helpful
Report abuse

Amazon Customer
3.0 out of 5 stars Interesting but disappointing
Reviewed in the United Kingdom on October 11, 2020
Verified Purchase
The title is something of a misnomer. There are 10 chapters, each dedicated to a particular 'Black Tudor'. It transpires that not much is known of any of these beyond a brief sentence in a document or two: a baptismal register or a court transcript, for example. Most of each chapter, therefore, is supposition or elaboration as far as it refers to the titular subject of the chapter. The bulk of each chapter is about better documented, more prominent individuals with whom the subject interacted, and about the history of the times (in some cases, John Anthony, for example) stretching well into other periods.
So interesting history, but don't expect to read much about people of colour living in Tudor England.
Read more
8 people found this helpful
Report abuse

Nomester
5.0 out of 5 stars the wonderfully named Reasonable Blackman
Reviewed in the United Kingdom on May 22, 2018
Verified Purchase
As Miranda Kaufman’s meticulously researched book makes clear, black people had a presence in Britain long before the 18th century. It is a history that has been largely overlooked. She found over 360 individuals of African origin living in England and Scotland in the years between 1500 and 1640 and uses the stories of some of them to expand on the world they lived in, using themes of navigation and piracy, colonisation, the slave trade, social hierarchy to paint a picture of Tudor life.

Piecing together the lives of ten Tudors of African origin she brings us some truly untold lives: including the diver Jacques Francis, who was employed to salvage cargo on the Mary Rose; John Blanke, a trumpeter at Henry VIII’s coronation; the wonderfully named Reasonable Blackman, a silk weaver; Mary Fillis, possibly a basket-weaver; and Anne Cobbie, a prostitute in London; Dederi Jaquoah, the son of an African king, who was a guest of a London merchant for two years; John Anthony, a former pirate living in Dover. Most lived in the city, but a few are found in the countryside: Cattelena lived in Almondsbury in Gloucestershire where she sold milk from her cow, Edward Swarthye was a porter to a nobleman.

The book's genesis was as an academic dissertation but it never reads like one. The style is interesting and accessible. Great colour plates. Recommended.
Read more
13 people found this helpful
Report abuse
See all reviews
Back to top
Get to Know Us
Make Money with Us
Amazon Payment Products
Let Us Help You
EnglishChoose a language for shopping. United StatesChoose a country/region for shopping.
© 1996-2021, Amazon.com, Inc. or its affiliates