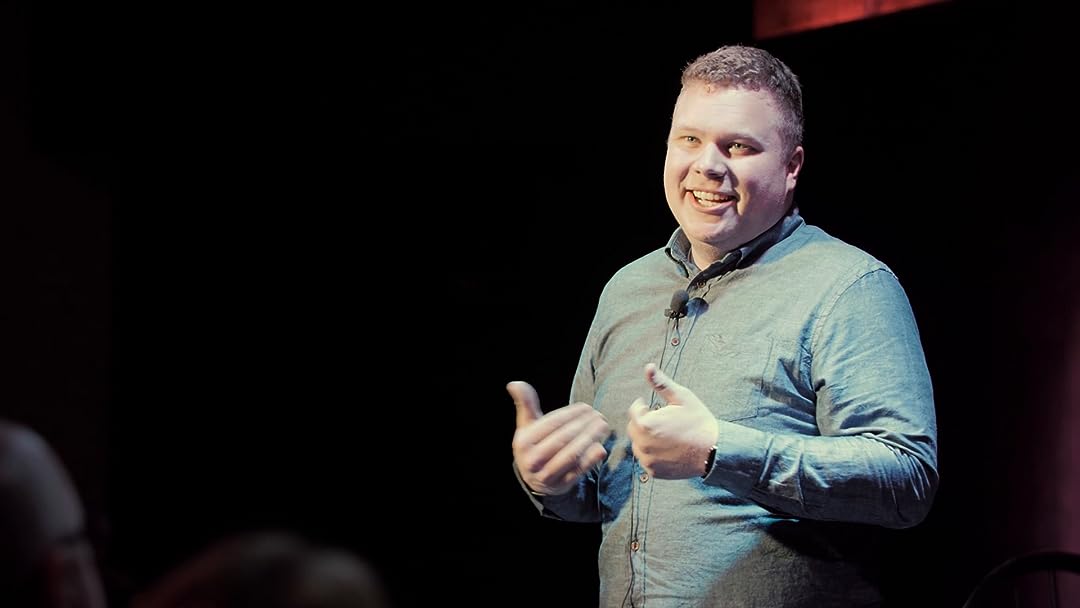 (286)
7.755min201813+
Comedian Jaron Myers asks a girl he's never met (Reagan Drake) to be his date to a comedy show. And as a surprise to her, and the audience, there is a dinner table on stage where they had their first, unscripted, date in front of a live audience.

It's shocking to me that this got any high marks at all. The concept seems cool, a blind date in front of an audience.
But frankly, it wasn't funny or insightful. Reagan, the girl, was adorable. But she also felt like plant. This was even more plausible because she is a professed actress. There is no way these two would ever go on a date in real life. It felt bogus.

But the worse thing was that it felt absolutely nothing like a date. I mean, there was no sexual energy or real conversation that normal first dates would have. It was more like two "strangers" trying to make small talk in front of an audience.

If it were an actually date, there would have been so many questions about past relationships, past dates, etc. For example, nobody ever said, "How long have you been on the dating apps?" Nobody ever asked about anything REAL. Nobody delved into philosophy or religion or sexual experiences. Typically on a real date, it is interesting to find out if the person is the same religion or has similar passions or quirks.

It felt like the 5 star reviews were merely from friends.

Again, Reagan is extremely charming and adorable and she will probably have an awesome acting career. But this was definitely not the vehicle.

seafanReviewed in the United States on September 1, 2018
5.0 out of 5 stars
Take that Reece - Reagan stole the show
Verified purchase
I love that Reagan could wolf down that chicken parm in from of an audience and hold her own on stage with Jaron, yet still seemed a bit nervous and vulnerable around the edges. I also love that she got her moment to steal the show - so take that Reece! I can't help but wonder how conservative Christian Jaron was internally processing some of Reagan's sailor language. LOL Can't wait for a sequel. Reagan needs to reserve this Jaron!
8 people found this helpful

Brian DReviewed in the United States on October 8, 2018
5.0 out of 5 stars
Slightly Awkward and Very Funny
Verified purchase
I usually don't watch stand up when it involves anything other than the stand up aspect of the show, I can't get into it. Example: when people put animations together, or add skits, or there's more music than stand up. This bit did really well I think. It was very unique, it was funny, and it worked. The cherry on top is that they are still dating, so for all you single guys out there who want to do something a bit different ^_^ I enjoyed this show enough to follow him on facebook and to look at what else he does and is doing.
5 people found this helpful

OutdoorsmanReviewed in the United States on May 15, 2021
2.0 out of 5 stars
Set-Up for the Comedian
Verified purchase
The girl on the date was just too comfortable and able to sling back humor that anyone really caught off guard on a first date would have a very hard time doing. She is a professed actress and I felt that entire set-up was pre-staged and rehearsed. I have seen wives of married comedians have a difficult time in front of an audience when called upon to come on stage for a few minutes. I think the comedian is genuinely funny and would have been much better relying on his own stand-up comedy routines. Someone said these two in real life would never be a real match because she has her acting career she is promoting and he is just not her type of match. I agree completely.

GetGadReviewed in the United States on November 25, 2018
1.0 out of 5 stars
All positive fake reviews
Verified purchase
If you had a SINGLE laugh, it's either because you've got a concussion or you're high on LSD.
I thought the perfect-score 5star rating here and at imdb would be real, NOPE.
It's either bengali click farms or his personal friends.
Some people in the crowd would force laughter between every other word, and he'd pull non-funny lines while sweating in discomfort. It was very cringe-worthy and a huge waste of my time.
I challenge you to watch more than 5min of this.
Nice idea, though
4 people found this helpful

David Dean SingsReviewed in the United States on May 19, 2020
5.0 out of 5 stars
Don't listen to bitter internet trolls - this is GOOD CLEAN FUN!
Verified purchase
This was quite an enjoyable routine and an awesome concept!

If you read the reviews of those giving one-star ratings, you'll see they believed this was scripted because Jaron and Reagan didn't discuss their sexual experiences!!! Good grief! Who are these people??? Just because they live lascivious lives doesn't make it the norm.

These are two apparently normal people on a not-so-normal first date. Kudos to Reagan for playing along, by the way.

One shining moment was when Reagan said something off-color and once Jaron got his laughter under control, he said, "My grandmother is in the audience." The whole audience burst into laughter, as did I.

I admit that things do slow down as the date begins, but it turned out to be quite a nice show!

JLoReviewed in the United States on September 26, 2018
5.0 out of 5 stars
It made me want to follow up on their second date
Verified purchase
I watch a lot of comedy. I really do. This film about a blind date really worked out well. This could've gone wrong in so many ways but it doesn't. People are taking risks, breaking through awkward moments and doing all this in front of a lot of strangers.

This felt so real on so many fronts and was so enjoyable to watch it progress along. I hope that their relationship goes above and beyond all expectations. They seem so right for each other.

I hope that each of their paths ultimately lead back to each other. Good luck to both your careers.
5 people found this helpful

ChrisReviewed in the United States on August 24, 2018
5.0 out of 5 stars
Like nothing I've ever watched!
Verified purchase
This film is incredibly unique and I was gripped from the very beginning! You can feel the nerves, chemistry, and awkward moments throughout the entire show, but it works magically. Raegan was the perfect date for this and she was equally important to this turning out well! I loved how well this was done and it is totally worth your time. 10/10 ChrisPoints™
6 people found this helpful
See all reviews
Back to top
Get to Know Us
Make Money with Us
Amazon Payment Products
Let Us Help You
EnglishChoose a language for shopping. United StatesChoose a country/region for shopping.
© 1996-2022, Amazon.com, Inc. or its affiliates