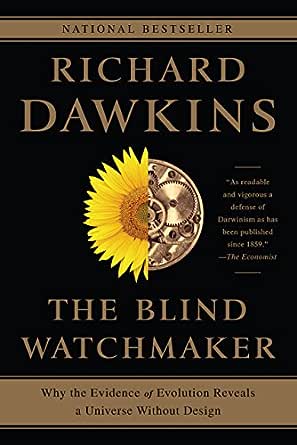 The Blind Watchmaker: Why the Evidence of Evolution Reveals a Universe without Design Illustrated Edition, Kindle Edition

Flip to back Flip to front
Audible Sample Playing... Paused   You are listening to a sample of the Audible narration for this Kindle book.
Learn more
ISBN-13: 978-0393351491
ISBN-10: 0393351491
Why is ISBN important?
ISBN
This bar-code number lets you verify that you're getting exactly the right version or edition of a book. The 13-digit and 10-digit formats both work.

“As readable and vigorous a defense of Darwinism as has been published since 1859.”
- The Economist

“Dawkins has done more than anyone else now writing to make evolutionary biology comprehensible and acceptable to a general audience.”
- John Maynard Smith

“A model of how to explain complicated ideas without dumbing them down or boring one’s readers.”
- Steven Pinker, The Guardian

“One of the best science books―one of the best any books―I have ever read.”
- Lee Dembart, Los Angeles Times --This text refers to the paperback edition.

Richard Dawkins is not a shy man. Edward Larson's research shows that most scientists today are not formally religious, but Dawkins is an in-your-face atheist in the witty British style:

I want to persuade the reader, not just that the Darwinian world-view happens to be true, but that it is the only known theory that could, in principle, solve the mystery of our existence.

The title of this 1986 work, Dawkins's second book, refers to the Rev. William Paley's 1802 work, Natural Theology, which argued that just as finding a watch would lead you to conclude that a watchmaker must exist, the complexity of living organisms proves that a Creator exists. Not so, says Dawkins: "All appearances to the contrary, the only watchmaker in nature is the blind forces of physics, albeit deployed in a very special way... it is the blind watchmaker."

Dawkins is a hard-core scientist: he doesn't just tell you what is so, he shows you how to find out for yourself. For this book, he wrote Biomorph, one of the first artificial life programs. You can check Dawkins's results on your own Mac or PC. --This text refers to an out of print or unavailable edition of this title.

Oxford zoologist Dawkins (The Selfish Gene, The Extended Phenotype trumpets his thesis in his subtitlealmost guarantee enough that his book will stir controversy. Simply put, he has responded head-on to the argument-by-design most notably made by the 18th century theologian William Paley that the universe, like a watch in its complexity, needed, in effect, a watchmaker to design it. Hewing to Darwin's fundamental (his opponents might say fundamentalist) message, Dawkins sums up: "The theory of evolution by cumulative natural selection is the only theory we know of that is in principle capable of explaining the evolution of organized complexity." Avoiding an arrogant tone despite his up-front convictions, he takes pains to explain carefully, from various sides, why even such esteemed scientists as Niles Eldredge and Stephen Jay Gould, with their "punctuated equilibrium" thesis, are actually gradualists like Darwin himself in their evolutionary views. Dawkins is difficult reading as he describes his computer models of evolutionary possibilities. But, as he draws on his zoological background, emphasizing recent genetic techniques, he can be as engrossing as he is cogent and convincing. His concept of "taming chance" by breaking down the "very improbable into less improbable small components" is daring neo-Darwinism. Line drawings.
Copyright 1986 Reed Business Information, Inc. --This text refers to an out of print or unavailable edition of this title.

The watchmaker belongs to the eighteenth-century theologian William Paley, who made one of the most famous creationist arguments: Just as a watch is too complicated and too functional to have sprung into existence by accident, so too must all living things, with their far greater complexity, be purposefully designed. It was Charles Darwin's brilliant discovery that put the lie to these arguments. But only Richard Dawkins could have written this eloquent riposte to the creationists. Natural selection - the unconscious, automatic, blind, yet essentially nonrandom process that Darwin discovered - has no purpose in mind. If it can be said to play the role of watchmaker in nature, it is the blind watchmaker. Acclaimed as perhaps the most influential work on evolution written in this century, The Blind Watchmaker offers an engaging and accessible introduction to one of the most important scientific discoveries of all time. --This text refers to the paperback edition.

Dawkins, author of The Selfish Gene ( LJ 12/1/76), persuasively argues the case for Darwinian evolution. He criticizes the prominent punctuationist school, and takes issue with the views of creationists and others who believe that life arose by design of a deity. Using the evolution of various animals as examples and drawing parallels from improvements in modern technology, Dawkins demonstrates the logic of the selection process and of an incremental evolution whose end products are the highly complex, functional organisms we know today. This provocative work is likely to generate further controversy in the scientific community. Recommended for informed laypersons, undergraduates, and scholars. Joseph Hannibal, Cleveland Museum of Natural History
Copyright 1987 Reed Business Information, Inc. --This text refers to an out of print or unavailable edition of this title.

Richard Dawkins taught zoology at the University of California at Berkeley and at Oxford University and is now the Charles Simonyi Professor of the Public Understanding of Science at Oxford, a position he has held since 1995. Among his previous books are The Ancestor's Tale, The Selfish Gene, The Blind Watchmaker, Climbing Mount Improbable, Unweaving the Rainbow, and A Devil's Chaplain. Dawkins lives in Oxford with his wife, the actress and artist Lalla Ward. --This text refers to the mp3_cd edition.
Read more