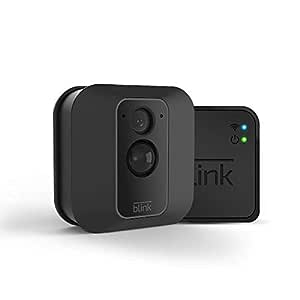 4.3 out of 5 stars
4.3 out of 5
35,248 customer ratings
How does Amazon calculate star ratings?
Amazon calculates a product’s star ratings based on a machine learned model instead of a raw data average. The model takes into account factors including the age of a rating, whether the ratings are from verified purchasers, and factors that establish reviewer trustworthiness.

Bonkers Bill
1.0 out of 5 stars Zero Stars - Motion detectors miss cars, no way to quickly retrigger, limited clip length.
Reviewed in the United States on May 29, 2019
Configuration: 3 Camera KitStyle: Blink XT2Verified Purchase
* Watching my driveway, foyer, and garage, the motion detector often does not pick up things that aren't small and hot - for example it completely misses the UPS and FedEx trucks that stop in my driveway.
* When it does trigger, it has a limited clip length and won't retrigger quickly, so it often misses key action. When guests pull into the driveway, it usually registers the car, but has run out of recording time by the time somebody gets out, and if they were up to no good, they'd be totally missed.
* Poor signal strength - it was difficult to find a place to for the 'sensor hub' that provided good coverage. All of the cameras are within 50' of the sensor, yet I can't find a place in the house for the hub where all get satisfactory signal.
* System is busy - often when I manually request capture the application reports 'System is Busy'

Not suitable for purpose as a security device - the system regularly fails to record critical events.

I'm not going to throw these away, but I would not buy them again.
Read more
4,696 people found this helpful
Helpful
Comment Report abuse

Gary H
1.0 out of 5 stars Updated review - Very poor distance
Reviewed in the United States on May 28, 2019
Configuration: 2 Camera KitStyle: Blink XT2Verified Purchase
Update 7/22/19 - Changing back to 1 star. They sent me replacement cameras that supposedly have better range due to a firmware update. Nothing changed, still can't connect to the one outside. I bought a $60 range extender and now get 4 out of 5 bars on that camera but it still won't connect. I thought this would be a great solution but apparently not.
Update 6/1/19 - I am changing my review from 1 star to 3 stars. Why? I got an email from the founder of Blink letting me know they are working on the unexpected issues and are very willing to work with me to get this figured out. They haven't actually done anything other than email me to let me know this, but their willingness to jump in so quickly and work on a solution speaks volumes to their desire to provide good customer service. I'll update again after I hear more from them and if we make any progress.
Original review:
I worked with support for almost 2 hours trying to get these to work but couldn't get any farther than 25' from my router. It's a straight shot from the router to the front door and a typical 6" wood framed wall next to the front door. Inside the door they worked fine, but as soon as I put them outside they quite working. Considering this is a "2" version you would think it would have better range. Very disappointed with Amazon and this product.
Read more
2,983 people found this helpful
Helpful
Comment Report abuse

clb
4.0 out of 5 stars Good value for the money, not sure about the 2way audio
Reviewed in the United States on May 31, 2019
Configuration: Add-On CameraStyle: Blink XT2Verified Purchase
I have been using Blink since it was a kickstarter company. The evolution of the product has been really solid. However, if your expecting to have real time surveillance this is not your product. First off let say setup is a snap as long as you follow the direction, something to remember the cameras connect to the WiFi and the sync module, the sync module placement is important. I recognize the camera now supports 2 way audio but I don’t see how that will work since typically you are notified after the video is made. The only way I see the 2 way working is if you had the app open and you were actively looking at the video when the event happened. That said for what it does do in recording events is excellent. The video looks good, and the night time infrared is good. Also, you can’t beat the free storage, and as for battery life they sure have come a long way that said remember to always use the lithium-ion batteries, they recommend by blink also remember that batteries are at there weakest when it is cold out. So to be clear about battery life, I have yet to have a camera’s batteries last 2 years. I now have a total of 3 cameras working all XT or XT2 and work they well for for my expectation. I have 3 more XT2 cameras coming I’ll update this review once those have been configured and and if things improve or go bad. I hope that with the 2 way Blink/amazon will have the app notify you as soon as motion is directed so you can take advantage of the mic.
Read more
1,913 people found this helpful
Helpful
Comment Report abuse

S. Burklin
4.0 out of 5 stars Where to begin? - UPDATED 6-7-19
Reviewed in the United States on May 28, 2019
Configuration: 1 Camera KitStyle: Blink XT2Verified Purchase
UPDATE: I absolutely must commend the team at Blink. For me, their recent flurry of software updates have resolved pretty much every issue I have had. I still wish that, overall, the ranges were greater, but my signal strength is now rock-solid (even without using my range extender). Live view works exactly as I expected and motion detection seems much more dialed in. It really feels like the system I expected.

In addition, I can't say enough about their customer service. Though the experience was initially frustrating, having both Efrain, (from customer service) as well as Peter, (their founder and GM) reach out to me to ensure that the software updates were working and to offer support on any other issues has really impressed me. Several years back, I went through a similar issue with a 1st generation coffee bean grinding coffee maker. The company that made the machine responded similarly to Blink and I have always said I would buy from them again in a heartbeat as long as they remain committed to that level of support. I can now say the same thing of Blink.

So, in summation, still wish wi-fi was a tad more powerful, but thanks to Blink's persistence and impressive customer support, I feel like I now have the system I was expecting.

UPDATE: Like a few others, I have revised my review because the founder of Blink has reached out to me, as has the Blink support team, which has left me very impressed with their customer service when it comes to dealing with the launch challenges. In addition, while there are still challenges, (like erratic live connection and motion tracking), the system has stabilized significantly for me. I DID end up purchasing a range extender, which left me a little chaffed at the added cost to obtain functionality, but the company's response to my issues has left me legitimately "wowed" and willing to continue to take this journey with them.

I will post additional updates as things continue to develop.

ORIGINAL REVIEW: Really wanted to like the XT2 based on price, ease of use, no ongoing fees, etc., but it's mostly been a dud so far. Live view almost never works, motion detection seems to not pick up on things when armed, and it can barely get two bars on internet connection when my phone (and any other device I've tried) gets almost full bars in the same area. I should also add that there's very little that makes it clear in advance that the cameras need to not only have good reception with the sync module, but also your wi-fi (Which makes the point of the sync module what, again?). I have ordered a range extender (additional cost) to see if I can resolve it, but I'm not hopeful based on other devices doing just fine in that area. Makes it particularly doubtful that this thing could handle additional cameras, when it can't seem to deal with one. Unless there are some firmware updates coming that make any of this better, I cannot recommend the Blink XT2 and am considering this a $100 lesson learned.
Read more
1,744 people found this helpful
Helpful
Comment Report abuse
See all reviews from the United States