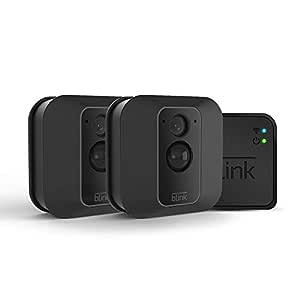 4.3 out of 5 stars
4.3 out of 5
18,739 global ratings
How are ratings calculated?
To calculate the overall star rating and percentage breakdown by star, we don’t use a simple average. Instead, our system considers things like how recent a review is and if the reviewer bought the item on Amazon. It also analyzes reviews to verify trustworthiness.

Gary H
1.0 out of 5 stars Updated review - Very poor distance
Reviewed in the United States on May 28, 2019
Verified Purchase
Update 7/22/19 - Changing back to 1 star. They sent me replacement cameras that supposedly have better range due to a firmware update. Nothing changed, still can't connect to the one outside. I bought a $60 range extender and now get 4 out of 5 bars on that camera but it still won't connect. I thought this would be a great solution but apparently not.
Update 6/1/19 - I am changing my review from 1 star to 3 stars. Why? I got an email from the founder of Blink letting me know they are working on the unexpected issues and are very willing to work with me to get this figured out. They haven't actually done anything other than email me to let me know this, but their willingness to jump in so quickly and work on a solution speaks volumes to their desire to provide good customer service. I'll update again after I hear more from them and if we make any progress.
Original review:
I worked with support for almost 2 hours trying to get these to work but couldn't get any farther than 25' from my router. It's a straight shot from the router to the front door and a typical 6" wood framed wall next to the front door. Inside the door they worked fine, but as soon as I put them outside they quite working. Considering this is a "2" version you would think it would have better range. Very disappointed with Amazon and this product.
Read more
3,157 people found this helpful
Helpful
Comment Report abuse

Blake B.
3.0 out of 5 stars Definitely Improving
Reviewed in the United States on May 28, 2019
Verified Purchase
UPDATE: I feel like I owe it to this company to update my review. They have without question, been improving the product - across the board. Video quality, trigger time...not there yet with distance but with how fast they are improving - I suspect they will get there soon. Also, the CEO sent emails around to connect with his patrons to let them know they are working on it AND sent me an additional Blink as a courtesy. They are mindful and I sincerely appreciate that. I hope to update this again from 3 stars to 5.

Adding some more disappointing tips...the app is so busy, it can be disorienting. Not designed very intuitive, you can't control the storage. But the MOST annoying factor is the trigger - there is a 10 second pause after it stops. So if someone activates it by throwing something at it, they know they have a 10 second window minimally to then pass the camera without being caught. I got this to watch my cat while I'm at work to make sure he's safe coming and going and literally can't see him because of this delay. Below is my initial experience:

POS. The serial numbers don’t register, you sit on hold for customer service for what says one minute then jumps to 17 mins, then it looks like it connects only to get radio silence. Then I get someone - and they use a POS phone system that you can’t hear anything.

Do yourself a favor and get NEST. This is an amateur product. Ugh. 👎👎👎
Read more
1,347 people found this helpful
Helpful
Comment Report abuse

Woodbill
2.0 out of 5 stars Not Impressive - second update
Reviewed in the United States on May 28, 2019
Verified Purchase
Original review after 5 days (May 28):
One out of two cameras has a small problem - the rubber piece in the center of back cover is broken out of the box. A call to customer service solve the problem - they sent me a replacement. Used the two cameras for five days so far, I will give it 3 stars at the moment. The set up was pretty easy, took me about 15 mins to get both working. The connection to WiFi is not very strong although close to a range extender but the cameras seem working fine. The quality of the videos are OK, cannot identify car plate numbers easily if the car is moving. My wife drove her car from street into garage at 2-3 miles per hour, the plate is not readable. Still need to see the battery life, but I don't really care about 2 years or 6 months as long as I don't have to change battery every month like my Ring door bell.

Sensitivity Issue: The cameras seem to be anywhere between way-too-sensitive to way-too-insensitivity randomly. They can be triggered by flies or be triggered 10 times within 3 minutes by some not-in-the-active-zone activities; or they may decide not to see anything for several hours to anything even just right in front of them.

Second update on July 5:
Using multiple extenders with same SSIDs and passwords is not a good solution which makes the entire WiFi at my home unstable. Now I had to invest a whole new mesh WiFi system. Everything works great now, but Blink XT2 is not impressive.
Read more
868 people found this helpful
Helpful
Comment Report abuse
See all reviews