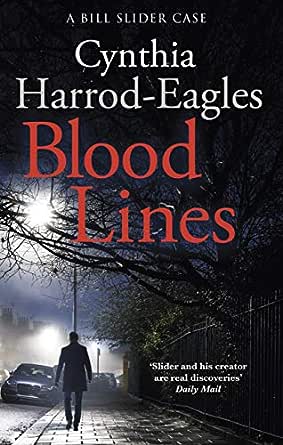 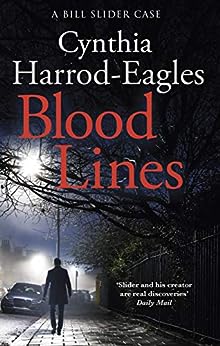 Great characters, a number of vicious plot twists, a suave detective and a gruesome death are all elements of a great mystery, and are all represented in Blood Lines. Inspector Bill Slider is on the beat to solve the death of a music critic who is found sliced open in a men's rest room. It's difficult to guess whodunnit when nothing in the tale is as it seems, not the victim, not the suspects, and, perhaps, not even the crime. --This text refers to an alternate kindle_edition edition.

After a start slowed by some uncharacteristically slapdash characterization and merely dutiful dialogue, Harrod-Eagles unleashes an effective dark-edged tale and serves up a truly nasty villain into the bargain. The fifth Inspector Bill Slider mystery (following Grave Music) revolves around the death of a promiscuous and pompous music critic who's found with his throat slit in the gents at a TV studio where he was about to appear on a talk show. Slider, whose lover, Joanna, is a violinist, gets to hunt for a killer in a case that initially centers on a hackneyed crew of suspects, all steeped in love for and/or envy of the famed commentator. If things start a bit simplisticly, Harrod-Eagles quickly burrows to an agreeably deeper level. A police officer is soon implicated, but the eyewitnesses' tales never quite gel even as the officer's odd past emerges in its full dysfunctional weirdness. All this is accomplished with nearly enough panache to blind the reader to the fact that the initial reason for the critic's untimely demise is actually a fairly goofy one. Once beyond the fitful start, Harrod-Eagles gracefully builds upon her habitually elegant procedural stylings to deliver taut psychological suspense.
Copyright 1996 Reed Business Information, Inc. --This text refers to an alternate kindle_edition edition.

His cool almost-ex Irene is as remote as ever; his violinist lover Joanna is off playing opera accompaniments; but Inspector Bill Slider still feels a bit as if it's old home week, because Sergeant Steve Mills, his old subordinate from Charing Cross, has just come aboard his latest case--the murder or music critic Roger Greatrex, whose throat was cut moments before he was to participate in a BBC panel. Apart from the scurrying of all the panelists and broadcast folk (none of them with any of his widow's reasons, or his mistresses', to do in the philandering Greatrex), who was wandering about in the corridor outside the men's room during those crucial last minutes? Sgt. Mills, that's who, insists a none-too-bright but stridently positive witness; and suddenly Slider, whose biggest worry so far was that his placid new super Eric Honeyman wouldn't give him the manpower he needed to nail down the case, now has to worry about the manpower he's got. A preliminary look into Mills's past leads only to another grisly murder--until Slider bethinks himself of a generic clich‚ that Harrod-Eagles (Grave Music, 1995, etc.) has audaciously dusted off. Briskly sketched characters on both sides of the law, tossed together in situations that crackle with gentlemanly tension- -though you may well wish the killer had had a more substantial tie to eminently killable Greatrex. -- Copyright ©1996, Kirkus Associates, LP. All rights reserved. --This text refers to an alternate kindle_edition edition.

The complicated characters . . . are among the author's finest stock. -- The New York Times Book Review, Marilyn Stasio --This text refers to an alternate kindle_edition edition.

Cynthia Harrod-Eaglesis the author of the hugely popular Morland Dynasty novels, which have captivated and enthralled readers for decades. She is also the author of the contemporary Bill Slider mystery series, as well as her new series, War at Home, which is an epic family drama set against the backdrop of World War I. Cynthia's passions are music, wine, horses, architecture and the English countryside. --This text refers to an alternate kindle_edition edition.

British Inspector Bill Slider has got a grisly and perplexing murder on his hands. A famous art critic has been found in the men's room of the BBC's London studio, his throat slit from ear to ear. At first, the death is ruled a suicide, but Slider suspects foul play and sets out to find the killer. He soon discovers striking similarities with other recent murders, including the killer's handiness with a knife and the odd little calling cards, printed with Bible verses, that are left at the scene. Then a reliable witness describes the killer, and to Slider's horror, the description fits his old pal Detective Steve Mills. Even though all the signs point to Mills' guilt, Slider can't see his friend as the killer. Doggedly determined to find the real murderer, Slider searches painstakingly for clues, pieces together the evidence, and finally confronts the killer in a bloodcurdling climax. Harrod-Eagles offers an unusually gripping police procedural with brilliantly devious plotting, devilish wit, and believably flawed characters that will convince even skeptics that the genre can be riveting. A stunner of a story that's guaranteed to please. Emily Melton --This text refers to an alternate kindle_edition edition.
Read more