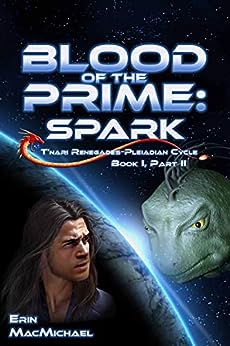 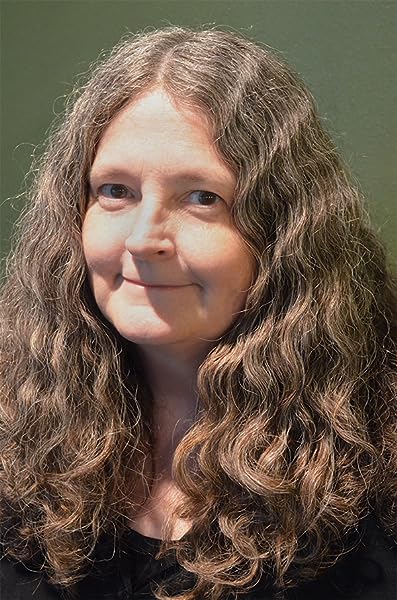 Barbara Underwood
5.0 out of 5 stars So much more than mere Science Fiction Fantasy!
Reviewed in the United States on November 25, 2019
Blood of the Prime: Spark.

Earlier this year, I read and reviewed the first part of this epic Science Fantasy adventure, Blood of the Prime: Predawn (T'nari Renegades–Pleiadian Cycle, Book I, Part I) and have been looking forward to reading Part II ever since then. If I was impressed by Part I, then I’m absolutely amazed and inspired by this sequel, especially at the conclusion.

Intelligent readers of Science Fiction and Fantasy who search for more depth, greater heights and more dimensions in order to understand and explain our existence will be rewarded by Erin MacMichael’s superlative creation. It is far more than a basic story of good versus bad, with an ultimate battle won by the good guys. Blood of the Prime examines the feared reptilian Drakh race, seeking to understand the reason for their aggressive behaviour and, ultimately, how their threat can be dealt with.

Perhaps the most enthralling and inspiring aspect of Blood of the Prime (and related prequels and novellas) is the dizzying spiritual heights the characters have attained. A few times some of them are referred to as adepts, instantly reminding me of Tibetan adepts who are believed to possess superhuman powers such as levitation, telepathy and similar mental abilities. The main character of this book not only communicates telepathically, he can transport himself from one place to another. When he finally meets his destined love, his psychic powers grow even stronger - and he is not the only one changed by love!

Besides humans, other intelligent beings live and work together, revealing their various psychic skills, such as exploring different planes of spiritual existence, and discovering the code within one’s blood. While some concepts may not be unfamiliar to the reader, others are sure to delight and thrill, and the conclusion may be truly enlightening and sublime to most of us!
Read more
Helpful
Report abuse

Regina Clarke
5.0 out of 5 stars Enthralling storytelling...
Reviewed in the United States on November 24, 2019
This is epic drama. Explosive in its trajectory. Worlds collide as rapacious reptilian invaders attempt to undermine and capture and destroy everything human.

Rhys is a powerful leader and pilot who enters the storms of aggression and hate waged against him by an empire of giants. He is a mysterious man with powers that emerge across worlds as he creates intricate weapons through sound and geometry that defy anything ever known before. Yet he also uses the articles of warfare to defend his people, with the help of so many others, but in particular the Dreamwalker Karra, his wife. The precision of his military campaigns is astonishing—the writer brings the battles to life with chilling detail, giving out the feeling of unstoppable energy and force.

But Rhys has a nemesis, Biak, a warlord reptilian who terrorizes anyone he touches or condemns. He’s the epitome of lethal arrogance, and a relentless enemy, who considers destroying Rhys his personal quest.

Blood codes are the core of momentum for Rhys and his tribe--the power of blood, specifically women’s blood from menstruation. A gold device, activated by women’s blood, opens interdimensional gateways. Sex is the key to creating portals for projection. The science of sexuality and energetics brings the power of feminine blood and sexuality to enhance abilities that allow Rhys and those who follow him to become aware of other ways of being that allow and bring transformation of their world—in particular, a transcendent geometric city--into being. Rhys sees the city forming in his mind when he is making love with Karra and “From the edge of his vision, the glimmer of cobalt he was looking for rushed toward them, building in vibrancy. The presence within him coiled, ready to spring. Out of the blue, a spark of gold touched his matrix, setting off a streak of white lightning. “ ‘Now, Karra!’ he cried out as electricity rushed through their bodies, bringing on a volatile release” and the city lies before him.

A line opens the novel: “Some agreements are difficult to remember, as are the reasons we made them.” These words circumscribe everything that unfolds. What is the nature of our being if we choose to thrive on decisions made by others before we were born, or by those who do not understand the sacred gift of life? And what choices can we make, must we make, when we come face to face with an outcome that promises to break us apart?

This story is intense, full of magic and shapeshifting, of people like the character Mia who use hyper telepathic and healing intuition to assist even the Drahks, the marauding tribe of Biak and his grandfather Bálok, who seems the incarnation of evil.

Lyrical even when advancing the plot, the story heralds the unknown worlds that lie in waiting. And the legends of the T’nari:

“Unperceived by the codewalker, but distinctly realized by his guide, a signal went out along fluid ancient highways to those who had created them to begin with. The message was clear: the sleeping Pleiadian dragon was stirring.”

The book crosses boundaries between worlds and brings with it a new awareness of immense possibility.
Read more
Helpful
Report abuse

c comars
5.0 out of 5 stars Keep them coming! great book!
Reviewed in the United States on November 24, 2019
Wow! I loved this book! All of the strands start to come together. The world building and character development draw you in and enthrall you. A large cast and varied locations that can be a little confusing, I did go back and re-read the first part, Pre-dawn, which refreshed my memory (getting old!!) A very engaging read, while it's clear there's a lot more story waiting to be told, this book ends on a satisfying note, with a lot of answers provided, along with indications of where the story is going. I really look forward to the subsequent books. This author brings a unique voice to contemporary science fiction.
Read more
Helpful
Report abuse

Dinky Deb
5.0 out of 5 stars Definitely Worth the Read!
Reviewed in the United States on November 25, 2019
Although it has been awhile (& several books later) since I read the first part, I instantly remembered these characters and what was going on. This second book lays everything out and many previous questions are answered. There is so much to this book that you will be enthralled!
Read more
Helpful
Report abuse
See all reviews
Back to top
Get to Know Us
Make Money with Us
Amazon Payment Products
Let Us Help You
EnglishChoose a language for shopping. United StatesChoose a country/region for shopping.
© 1996-2021, Amazon.com, Inc. or its affiliates