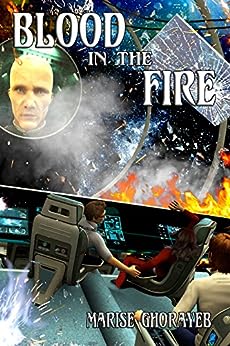 Born in Calgary, Canada, Marise Ghorayeb traveled extensively during her childhood. She enjoyed the privilege of visiting countries that included Japan, Egypt, and Australia among others. These travels were a part of the reason she became an author. A vivid imagination is required when there are no friends around and all available television is in foreign languages. As an adult with an engineering career, Marise Ghorayeb has settled in Houston, Texas with her beloved dog. Her professional knowledge empowers her to add a layer of reality and depth to the fantasy and science fiction tales she loves to weave.

Michael Gardner
4.0 out of 5 stars Sizzling
Reviewed in the United States on August 24, 2015
Verified Purchase
I’m not a big reader of YA books, but I am familiar with the author’s work and I know she’s a very good writer. Even so, I was pleasantly surprised how much I enjoyed this book. It’s about time travelling wizards who have to save time and space from other evil wizards – so what’s not to like? But in all this, the characters have to deal with normal day-to-day problems, which makes them very realistic and approachable. For grand space opera, it manages to remain quite down to earth.

Let me note that I haven’t read the first two books in the series, and even though I didn’t have any serious trouble following the story, I think I would’ve enjoyed this book more if I had. I highly recommend you don’t make my mistake, and read this series from the start.

LoveWords
5.0 out of 5 stars Hits the Mark
Reviewed in the United States on March 15, 2016
It’s easy to say a book has no dull moments, but Blood in the Fire hits the mark. The story is intense and imaginative with excellent world-building and vivid descriptions. Best of all, we care about the characters.

Elizabeth (Liz) is the astonishing teen hero, sister of serious Luke as well as brash Mark. The orphaned siblings share a wondrous bond.

“You’re grounded!” brother-guardian Luke declares when Liz has endangered herself yet again. Ground a girl who can teleport, shapeshift, split her soul, and bluff godlike beings into compliance? To her credit, Liz never points out Luke’s powerlessness even while she insists she’s doing what she must. And what Liz must do is win a war against alien wizards—a war that transcends time.

I’m impressed that the author doesn’t rely on gore or sex to hold reader interest. Instead of fatuous romance, there’s gentle, supportive, respectful love—the kind we know will grow along with Liz. Blood in the Fire, third book in the Timelaws Trilogy, leaves us hoping for a second series.
Read more
One person found this helpful
Helpful
Report abuse

Margie Moon
5.0 out of 5 stars A fun adventure!
Reviewed in the United States on February 25, 2016
The theme of protecting timeline has been done over and over, but Marise made it original and imaginative though young Elizabeth’s journey.

The time-protector Elizabeth is a strong character I can root for. She’s a role model for many young girls. She’s clever, brave, fun, and selfless. In the end, she makes tough choices that many adults can’t do. Liz’s domestic life and her relationships with her brothers are wonderful to read as well.

The writing is fun and fast paced. One second I’m in the old world, where the characters come alive for me; the next I’m surrounded by cutting-edge technology in the futuristic setting. Magic ties everything together seamlessly. The story always moves forward with plenty of actions and complex subplot.

Blood in the Fire is a surprisingly fun ride and keeps you turning pages.
Read more
One person found this helpful
Helpful
Report abuse
See all reviews
Back to top
Get to Know Us
Make Money with Us
Amazon Payment Products
Let Us Help You
EnglishChoose a language for shopping. United StatesChoose a country/region for shopping.
© 1996-2021, Amazon.com, Inc. or its affiliates