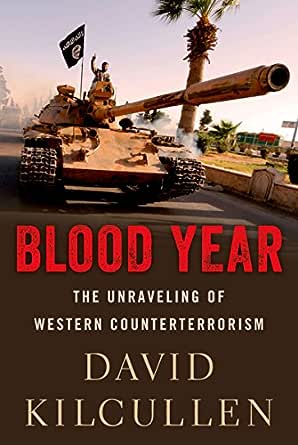 Flip to back Flip to front
Audible Sample Playing... Paused   You are listening to a sample of the Audible narration for this Kindle book.
Learn more
ISBN-13: 978-0190600549
ISBN-10: 0190600543
Why is ISBN important?
ISBN
This bar-code number lets you verify that you're getting exactly the right version or edition of a book. The 13-digit and 10-digit formats both work.

"Direct, insightful, and frightening, this book will prepare readers to see through the misguided, simplistic solutions to the problems of Middle Eastern policy and Islamic terror so common in this election year." ---Kirkus Starred Review --This text refers to an out of print or unavailable edition of this title.

David Kilcullen is the Chairman of Caerus Associates. Before founding Caerus, Dave served twenty-four years as a soldier, diplomat, and policy advisor for the Australian and United States governments. He is the bestselling author of The Accidental Guerrilla, Counterinsurgency, and Out of the Mountains.

John Pruden is a professional voice actor who records audiobooks, corporate and online training narrations, animation and video game characters, and radio and TV commercials. An AudioFile Earphones Award winner, John has a solid creative foundation from which to draw for his intelligent audiobook narrations. --This text refers to an out of print or unavailable edition of this title.

Daniel de Wit
5.0 out of 5 stars Best Analysis Yet Written on the Islamic State and the Crisis in Iraq
Reviewed in the United States on February 22, 2016
Verified Purchase
Blood Year stands out amongst the burgeoning literature on both the Iraq War (2003-2011) and the ISIS threat (2014-onward) for its insightfulness on the road that led to the current juncture and its ability to provide relevant guidance without bogging down in heavy academic writing.

First and foremost, Blood Year is a 'mea culpa' from a policy insider who, as much as any other single figure, helped craft US counterterrorism policy from 2005 onward. Kilcullen's "Disaggregation Theory" served as a critical corrective to US policy which had up until its formulation sought to tie the world's jihadists together under the single umbrella of terrorist, magnifying the threat rather than diminishing or defeating it. Yet as Kilcullen is the first to admit, this strategic framework also served to focus the US too closely on Al-Qaeda Central in Pakistan (especially after the start of the Obama Administration in 2009), and ignored the rise of al-Qaeda's erstwhile junior affiliate in Iraq. This, combined with the US invasion of Iraq (which Kilcullen describes as the worst strategic blunder since Hitler's 1940 invasion of the USSR) set the stage for disaster. Kilcullen goes on to chronicle how, with US forces out of Iraq and no longer applying pressure to Iraqi PM Nuri al-Maliki to maintain an inclusive government, Iraq began a swift descent into sectarian civil war, as well as the rise of ISIS from the remnants of Al-Qaeda in Iraq combined with former Ba'athist officers and Sunni tribes disenfranchised by Maliki's increasingly pro-Shi'a policies.

The result is a swift, incisive read that stands out as the best yet written on the rise of ISIS.
Read more
26 people found this helpful
Helpful
Report abuse

Brian Arps
4.0 out of 5 stars I recommend this book
Reviewed in the United States on September 1, 2016
Verified Purchase
I recommend this book. It is a reasonably fair and quite interesting account of the conduct of middle eastern wars and the rise of ever more extreme terrorist groups. It is written for western eyes so there is not too much that would upset the garden furniture. He dislikes Putin and has doubts about the French so no problems there. As for the Iranians, Syrians, Iraqis, Turks, etc; Less said soonest mended.If any impressed him he didn't say.

His view of war is that of a military man, yet he is smart enough to know that that doesn't work too well when the wars in question are being lost. He faults both Bush and Obama for their policies and why not? Both have been on the low side of average as US presidents go. Should we expect more from Trump or Clinton?

The book shines when he writes about the details of war. He has an organised mind and converts the fog of war into clear positions and actions that are easy to understand and that one relate to. One can see why those in power would consult him.

He recognises that there are a few short-comings in the way that these wars have been conducted, mostly by the USA. He does not however mention the complete absence of any political strategy that would enable them to be fought and won in a vaguely coherent manner. His answer to the question, "Where to now?" is disappointing but I suspect he is holding back. Why tell ISIS the winning move?

He advocates more and better warfare, but I have my doubts and I suspect he does to. When you are pruning your bush into the shape of an aircraft and it all goes wrong, it is often better to tryagain next spring.

I have reviewed this book with a querulous tone. It is worth reading, but I never got over the feeling that Kilcullen was writing to please a particular audience, but that the facts didn't serve.
Read more
3 people found this helpful
Helpful
Report abuse

Thomas M. Magee
5.0 out of 5 stars It Connects the Dots
Reviewed in the United States on May 9, 2017
Verified Purchase
This book is excellent. It will answer the questions swirling around in your mind from the news of the Middle East. This book connects the dots to explain the headlines you see today.. He explains why things are such a mess there. If you look closely he explains what is going to happen in the near future.

David Kilcullen authority on the Middle East is known all over. He has been an adviser to both General Petraeus during the surge, Secretary Rice, to name just a few. He explains in the book the surge. Then he goes to explain how we got from the surge to the present trouble with ISIS. Through that you can see ISIS was a product of a political situation. So even if the west kills all of ISIS, which they are doing quite well right now there is an underlying problem. That problem will create new messes after ISIS is gone if it isn't dealt with. He gives you great detail not listed anywhere else to prove his points. He analysis covers both Iraq and Syria. Anymore you can't discuss one without the other.

A must for sure for any government official.
Read more
One person found this helpful
Helpful
Report abuse

David G. Crooks
4.0 out of 5 stars easy to read
Reviewed in the United States on April 29, 2016
Verified Purchase
First half of book is fast moving, easy to read. He's been close to many of the anti-terrorist efforts as an Aussie military adviser ( former Aussie Colonel) to U.S and other anti jihadist forces.r Later he gives a lot detail about very recent jihadist activities and relates some to their antecedents in recent history. He believe the Bush-directed invasion of Iraq was a huge mistake, leading to many of our troubles in the middle east. He agreed with the belated Bush-Petraeus surge in 2007. He believes the laxity of the Obama actions Iraq and Syria since 2012 allowed some situations to get even worse and more dangerous. He concludes that the jihadist problems being created by both ISIS in several locations and by the Taliban in Afghanistan will continue to get worse if the U.S does not take a much larger role in leading the opposition. He fears that if the problems are allowed to grow so much that the U.S. and it allies become much more threatened in their homelands, there will be a strong tendency for U.S and other democratic government to become much more authoritarian in response and thereby lose freedoms.,

A similar view about the Iraq intervention is expressed by a concurrent author, American former Army colonel and professor Andrew Rackovich in his book "Americas War," but that writer seems to believe we should let the middle east countries deal with their problems with less western help.
Read more
3 people found this helpful
Helpful
Report abuse
See all reviews

mick greenshields
1.0 out of 5 stars It out of date
Reviewed in the United Kingdom on July 8, 2019
Verified Purchase
Total rubbish
Read more
Report abuse

hyppatia
5.0 out of 5 stars blood year, more like blood centuries
Reviewed in the United Kingdom on April 21, 2016
Verified Purchase
a very honest revealing study of the terrible situation we are involved in
Read more
One person found this helpful
Report abuse

Alok Singh
4.0 out of 5 stars Those who do not remember the past are condemned to repeat it
Reviewed in India on February 26, 2017
Verified Purchase
A military man's take on counter-insurgency. The author is the only man I've heard to make the claim that GW Bush is "folksy" in public but absolutely on the ball behind closed doors. He makes similar bold claims about the mismanagement of the invasion of Iraq and why it was doomed to fail. These claims ring true. None of it is new though. Any student of counter-insurgency operations in Asia would have been able to point out any number of situations which the current situation in Iraq and Afghanistan is a historical re-enactment of.

The author's rank of Lt. Col. is at the sweet spot between field operations and staff headquarters. He writes with confidence and work is well referenced. I did not see any reference to counter-insurgency works originating from Asia in the bibliography.
Read more
Report abuse

emed0s
3.0 out of 5 stars Kilcullen at his worst
Reviewed in Spain on May 2, 2016
Verified Purchase
To give you a reference I think "Out of the mountains" is his best by far. And to clarify Kilcullen at his worst is still a good read, but the well developed main idea constructed step by step by a multitude of interesting, and entertaining, examples is missing here. In all the books feels like a collection of independent articles that for the most part include already well known information.
Read more
One person found this helpful
Report abuse

Dan Scott
5.0 out of 5 stars Excellent book.
Reviewed in Canada on November 19, 2016
Verified Purchase
Kilcullen has a depth of knowledge and understanding of the issues that is superb. The book is a must-read for anyone trying to understand ISIS and the many layered issues facing not only the Middle East and surrounding regions, but also the entire Western approach to the region and how it affects Europe and North America (and Africa). Excellent book.
Read more
Report abuse
See all reviews