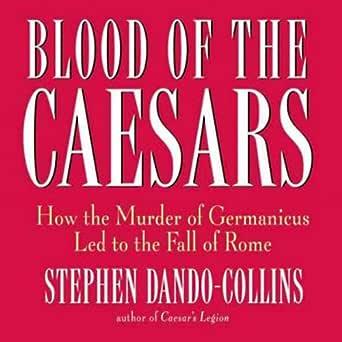 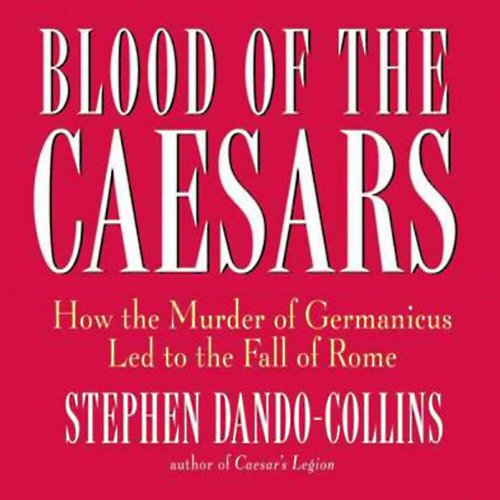 Blood of the Caesars: How the Murder of Germanicus Led to the Fall of Rome

Blood of the Caesars: How the Murder of Germanicus Led to the Fall of Rome
Stephen Dando-Collins (Author), Robert Blumenfeld (Narrator), Audible Studios (Publisher)
Get this audiobook free.
$14.95/mo after 30 days. Cancel anytime

M. A Newman
3.0 out of 5 stars Fools gold for a golden age
Reviewed in the United States on November 10, 2009
Verified Purchase
This is a very interesting book, but ultimately the author has produced a flawed product. The is work by Dando Collins suffers from two fatal flaws. The first is that his basic thesis, that the death of Germanicus weakened Rome, setting the stage for a series of weak and corrupt rulers, thereby leading to the western empires eventual fall in 476 AD and the eastern empire's destruction in 1453 (good runs considering). But it is perhaps his solution to the person behind the murder of Germanicus that is ultimately the most unsatisfactory aspect of this work.

That the succession issue was bothersome for Rome is no question. It lead to periodic outbreaks of Civil War and undermined political stability in the 200s. However it is probably an overstatement to conclude that had Germanicus and his eldest sons taken over from Tiberius that Rome would have been spared these complications. I have a hard time imagining that Germanicus as the third emperor could have engendered a situation, as Dando Collins claims, in which Roman ruins might have been found in Capetown and persons living in China might have learned Latin. This is an overstatement in the extreme.

Dando Collins makes extensive use of Dio, Tacitus, and Suetonius. While he tends to question the accuracy of both Suetonius and Dio in places (the did write 70 and 200 years after the events of the book), he gives Tacitus a pass. While Tacitus is an excellent writer and the leading historian of imperial Rome, he too has an agenda. Tacitus, in common with most members of the senatorial class, never met an emperor he really liked (Suetonius never heard of an affair by an emperor in which he did not believe, particularly if involved some extreme perversion). As a result the crimes of the emperors are overstated just as the failings of their victims are understated. Probably everyone was using a common play book in which murder, poisoning, slander, sexual entrapment were all considered fair game. Imperial opponents probably were no more moral than the emperors they sought to undermine.

That Germanicus was a good general is beyond dispute. He seems to have been genuinely popular and his death devastated the empire. However given the fact that his third son was Caligula and his grandson was Nero, I am more than suspicious of his status as paragon. While it is understandable that Caligula and Nero turned out the way that history records them as behaving, it probably would be less comprehensible if a product of the environment of palace intrigue, which Germanicus certainly was, would have been much better. Both Caligula and Nero both had really brilliant starts and then abruptly became erratic and tyrannical. What evidence do we have that it would have been any different for Germanicus?

I should say at the outset that I found Dando Collins' attempt to solve the mystery of who killed Germanicus to be the most disappointing aspect of the book and if anyone wishes to find out what this, he should halt reading here. Early on, Germanicus identifies five suspects, Tiberius, the emperor, Livia, the dowager empress, Piso a political rival, Plancenta, Piso's wife and Sejanus, a henchman of Tiberius, all of whom benefitted allegedly from the death of Germanicus. His solution in the last chapter is to accuse the philosopher Seneca and the wife of Germanicus, Agrippina (who previously had been portrayed as a proud, but innocent victim of Tiberius) as the likely culprits. This is nonsense. The only reason Dando Collins has for selecting Seneca is because of his later prominence. Most of the characterizations of the other figures seem to be informed by the novel by Robert Graves, "I, Claudius."

While accusing Seneca of murder is a stretch, Agrippina the elder is absurd. If anyone suffered more from the death of Germanicus, it would be her. Women in Rome derived their status from who they were married to. Her best chance of gaining the power that she craved was as the consort of Germanicus. An affair with Seneca, if learned of, would mean only disgrace and ruin. The idea that the proud granddaughter of Augustus Caesar would have taken up with an obscure Spaniard is bizarre (her daughter Julia was, as history records, not so picky). Really by making this charge Dando Collins not only is guilty of outdoing Suetonius in terms of sensation, but indulging the most absurd hyperbolic conclusions. Had the publishers of this book discarded the final chapters of the book and inserted a new conclusion, the work would have been far better in terms of quality and ultimately less disappointing.

Slippin' Jimmy
3.0 out of 5 stars Yeah, nothing crazy about that
Reviewed in the United States on May 18, 2013
Verified Purchase
It's difficult to rate this book. I'm giving it 3 stars because it's a quick and entertaining read, but as far as historical plausibility, it makes Dan Brown look like Josephus.

First, the idea that the death of Germanicus put Rome on a path that would lead to its collapse centuries later is, at best, a bit of a stretch. We have no basis for concluding that Germanicus would have been a particularly capable Emperor. If the Empire fell within decades of Germanicus' death, then maybe the case could be made. But after centuries? That's like blaming the hypothetical dissolution of the United States sometime in the 23rd century on the assassination of Abraham Lincoln.

But second, the idea that Agrippina would conspire with Seneca to murder her husband takes this train well past "A Bit of a Stretch" and straight into Crazy Town. The thesis is that Agrippina was frustrated by her husband's unwillingness to leverage the revolt of the legions to his advantage and place himself on the throne. Her solution for this, of course, is to have him poisoned years later in Syria. She does this even though Germanicus is next in line of succession and even though he has been given control of the whole of the Eastern Empire, making him the second most powerful man in the Roman Empire and a shoe-in for being Emperor himself one day.

What exactly is poisoning Germanicus supposed to accomplish for Agrippina? And if she did all of this at the behest of Seneca, then why wouldn't they have any association in history after that? Why would she conspire with a man who was barely in his 20s? And why frame Piso and Plancina? To embarrass the Emperor? He would have nothing to be embarrassed about if Piso and Plancina were innocent of any wrongdoing.

Considering the life Agrippina had while Germanicus was alive and the life she had in the years following his death, it's ludicrous to conclude that she would have had anything to do with his murder.
Read more
6 people found this helpful
Helpful
Comment Report abuse

Carl Reddick
5.0 out of 5 stars Fantastic glimpse of the end of Caesar's family tree
Reviewed in the United States on April 21, 2009
Verified Purchase
I admit to being a Stephen Dando-Collins fan. This, his most recent effort, was spellbinding from start to finish. D-C takes us on a complete tour of the lives, and fates, of the descendents of Caesar. Caligula, Claudius, and Nero all figure prominently as the family vies to destroy each other. The map and family tree were very helpful in keeping the various Druses' and Aggripina's straight as author's theory on the killer of Germanicus began to gather steam. The suspects certainly include the emperor, Tiberius, himself. But don't forget Livilla, the dastardly Sejanus, and the unstable governor of Syria, Senator Piso.
The way the book is constructed is very clever as well. We open with the recent death of Germanius and proceed forward in time until the death of Nero, some 50 years later. While the theory may or may not be true, the reader is in for very good historical accuracy, clearly presented in a gripping and highly entertaining manner. Loads of fun for the Roman history lover, Three thumbs up!
Read more
2 people found this helpful
Helpful
Comment Report abuse
See all reviews

Mr. P. Duffy
5.0 out of 5 stars Enjoyable book
Reviewed in the United Kingdom on August 4, 2012
Verified Purchase
I found the book interesting and I thought the chapters to be well thought out.

I find the authors conclusion on the identity of the murderers to be believable, it is sure to surprise you.

The aftermath of the murder of Germanicus was shocking. Lots more murders/executions. A number of people, including children, loosing their lives, some due to false charges by wickedly corrupt people.

It seems the biggest mistake Germanicus made was not to heed his soldiers who wanted him to take the throne for himself. This does at least show that he was not so power hungry, unlike so many others in this story. It is also quite possible that had Germanicus taken the throne he would not have been murdered, at least not so early on in his life.

Did the murder of Germanicus change history? Well, I'd agree with the author and say, most definitely.

If there was ever a film made of the life and death of Germanicus it would be like watching a Mafia film like Casino or Goodfellas. I think Germanicus was likely the most reasonable personality, seemingly not corrupt. The rest of the characters however proved themselves just like Mafia goons once Germanicus was out of the picture.

The cover of the book is nicely done, I think. The red background is shiny, like a metallic finish if you are interested.
Read more
2 people found this helpful
Report abuse
See all reviews