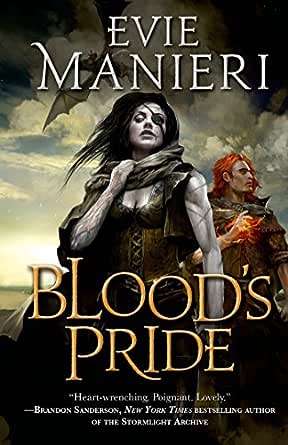 You've subscribed to The Shattered Kingdoms! We will preorder your items within 24 hours of when they become available. When new books are released, we'll charge your default payment method for the lowest price available during the pre-order period.
Update your device or payment method, cancel individual pre-orders or your subscription at
Your Memberships & Subscriptions 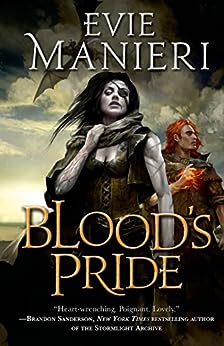 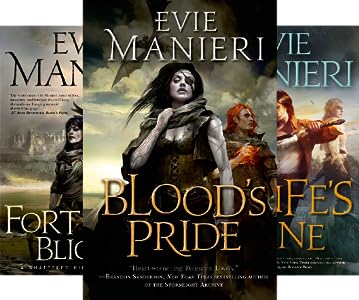 EVIE MANIERI has a degree in Medieval History and Theatre from Wesleyan University. This is
her first novel. She lives with her family in New York City. --This text refers to an alternate kindle_edition edition.

Plot and pacing to leave you breathless, characters you will treasure--a terrific debut! (Melanie Rawn, author of Touchstone)

Eve Manieri deftly portrays three clashing cultures about to be torn apart by violent rebellion. Against the background of war and revolution, three mismatched couples struggle to stay true to their families, themselves, and the ones they love. I found myself deeply engrossed in this fast-paced tale of honor and betrayal, hope and despair, secrets, revelations, and a whisper of divine magic. (Sharon Shinn, author of Troubled Waters)

Intrigue, betrayal and old rivalries play out against the fires of revolution. Hang on for a wild ride! (Gail Z. Martin, author of The Dread: Book Two in The Fallen Kings Cycle)

This clever take on epic fantasy, filled with unexpected twists and turns right to the end, will undoubtedly appeal to fans of Michelle West and Patricia Bray. (Rachel Neumeier, author of the Griffin Mage Trilogy) --This text refers to an alternate kindle_edition edition.

EVIE MANIERI has a degree in Medieval History and Theatre from Wesleyan University. Blood's Pride is her first novel. She lives with her husband and daughter in New York City. --This text refers to an alternate kindle_edition edition.
Read more

Magendie
5.0 out of 5 stars A must-read if you like non-formulaic, character-driven fantasy
Reviewed in the United States on February 19, 2013
Verified Purchase
I really loved this book. I have read my share of formulaic fantasy, and don’t get me wrong – I love a great Naive Hero vs. Big Bad Evil formula book as much as the next guy. A few new names, a new ‘code’ of magic, then you pretty much know how the story is going to go without working too hard. Hey, who doesn’t want to believe that the little guy can’t just rise up and defeat pure evil? I sure wish I were that guy. It’s nice to pretend. That’s why it’s fantasy.
THIS IS NOT THAT BOOK. Be forewarned. THiS IS MUCH, MUCH BETTER. Evie Manieri has created an imaginative, complex and deep new world filled with three-dimensional characters who have magical powers, mysterious and noble pasts and ancestry, but at the same time have character flaws that threaten and sometimes utterly destroy the execution of their noble intentions. Any one of the main characters could be the Hero; it is fascinating to watch how many are defeated by their own flaws -- just like real people. It takes incredible insight into human nature to develop characters and relationships this complex yet so internally consistent. I found myself hoping against hope not only for the Shadari to win their freedom, but for each of these characters to rise above themselves. Some do, which is gratifying. But there are enough wild cards (Dramash, the Mongrel) to wonder just how it will go in the next book. I personally can’t wait to find out.
Thanks, Evie Manieri, for writing a book for people who want, every once in a while, to read a fantasy book with real characters. And by the way, I loved the battles. ☺

StevenP24
5.0 out of 5 stars I could not put this book down!
Reviewed in the United States on March 7, 2013
Verified Purchase
I loved this book! This is not a genre that I normally read, so I went into it with very little preconceived notions. Now that I've finished it, I am literally out of breath. The author has created a rich, vivid world with three-dimensional characters who become more and more fascinating as the story progresses. In fact, it was the characters more than anything that made me love this book. Each character is so multi-faceted and simply cannot be "categorized" as one particular type. (Hmm... just like actual people! Go figure.) This is not an "easy" book to read, but for my personal taste, that's a good thing. It is complex. It makes you think. It challenges you to figure out what is happening and what the characters are thinking, feeling, etc. without spoon-feeding you the information. More than once I had an "ah-ha" moment and went back a few pages to re-read something and thought, "Oh, I see what's happening here." (I love when books do that!) I became so completely invested in these characters and the story that I was sneak-reading whenever I had a spare second. I'm not sure how this novel compares to others in the same genre, but I can say as an avid, reader of eclectic fiction that I was thoroughly engrossed from start to finish. I was equal parts completely satisfied at the end as well as totally eager for the next book. I can't wait to see how these characters and relationships will develop in the next books, and what consequences these characters will face because of their actions in this book. It's just a fantastic, bold novel and I am in awe of the mind that not only imagined such a world, but was able to bring it so vividly to life. Wow! I highly recommend this.
Read more
One person found this helpful
Helpful
Comment Report abuse

E.P. McLean
2.0 out of 5 stars First in a series.
Reviewed in the United States on January 4, 2015
Verified Purchase
Kind of a soap opera. The main character is not the main character. Multiple story lines move around with often little explaination. Multiple back stories are reveled with little explaination or planning. At its heart you have a standard people fighting against harsh occupation by a warrior people. It just never comes together well. A lot of pathos not enough structure in the plot to work for me.
Read more
4 people found this helpful
Helpful
Comment Report abuse
See all reviews

The setting was interesting and different, but not fully explored, the characters well fleshed out yet somehow left me a little cold, the plot possessing promise but feeling like it rather kept well within itself. The idea of the imperial swords was the crux of why everyone was there, yet barely used let alone any fun had with it. The book was set in a city-state overshadowed by a huge temple-fortress, yet only a handful of people mattered in the city and the Norlanders garrison - an interesting race that again felt under-explored - was reduced to a squabbling family with one or two additions. The magic was rather under-used, and despite contact between the cold and warm races burning skin right from the start, it wasn't clear how sex worked under those circumstance! And with all squabbling and lies, I just didn't care a lot about the characters which, given the plot was a bit too small and plain for what I wanted, meant it fell a bit flat.

Looking up all that sounds like I hated it, and I didn't at all, it just didn't quite work for me.
Read more
Report abuse

Max Willson
2.0 out of 5 stars A gentle warm up to something hopefully bigger
Reviewed in the United Kingdom on November 2, 2020
Verified Purchase
Well written but lacking relatable and engaging characters, this story seemed somewhat confusing (although should have been simple) and for what little that happened is a very long book. However, I suspect this is a warm-up to a more action-packed and dynamic sequel but sadly I won't be reading it
Read more
Report abuse

Cliente Amazon
5.0 out of 5 stars An amazing mixture of personal tales and epic fantasy
Reviewed in Brazil on March 23, 2019
Verified Purchase
This will definitely be on my list of best books read this year. The autor manages to tell us a tale about war, magic and prophecy while introducing us to unique characters who all feel alive. Nearly every character has its own arc and motivations and the struggle between you own selfish desires and what's best for the comunnity its permanent.
Anyway great book, highly recommended!!
Read more
Report abuse
See all reviews