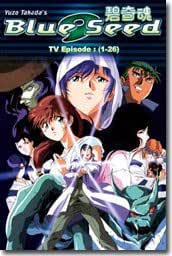 4.6 out of 5 stars
4.6 out of 5
43 global ratings
How are ratings calculated?
To calculate the overall star rating and percentage breakdown by star, we don’t use a simple average. Instead, our system considers things like how recent a review is and if the reviewer bought the item on Amazon. It also analyzes reviews to verify trustworthiness.

B. Ackley
3.0 out of 5 stars Great Show, mediocre transfer
Reviewed in the United States on January 1, 2019
Verified Purchase
I was both surprised and excited to see a Blu Ray release of Blue Seed. As an older anime, shows like Blue Seed are sometimes forgotten because they didn’t obtain the level of popularity like properties such as Cowboy Bebop or Evangelion. This lack of popularity is not a reflection of the show quality. Created by Yuzo Takada (3x3 eyes) the show is steeped in Japanese folklore and tells the story of a young girl named Momijo who must protect Japan along with her her teammates the TAC against the evil creatures the Aragami. The show is a lot of fun with its twists, turns, humor, and action.

The Blu-Ray presented here is in standard definition. The entire 26 episodes of the series, plus OVAs “Blue Seed and Beyond”, and omake theater are included along with both Japanese and English audio. The blu Ray features gorgeous Yuzo Takada artwork and comes in a slip case featuring artwork from the show. My only complaint is the quality of the video itself. Being a standard definition presentation and the show being created in the late 90s I didn’t expect a shiny looking show. I was however bummed to see video tape lines when the scenes changed and in some cases shakey images. I wish I had my old ADV dvds to compare.

Overall a nice set marred by poor video. I’m not sure I could recommend based on the quality of the video but the actual blu Ray packaging is quite nice.

JMR1022
5.0 out of 5 stars My childhood!
Reviewed in the United States on December 18, 2018
Verified Purchase
I watched Blue Seed when it was on VHS back in the mid-90s when I rented some volumes at Hollywood video! To see this on blu-ray is surprising as there was a complete DVD box set about a decade ago.

Blue Seed is about a 16 year old girl named Momiji Fujimiya who is an ordinary girl, except she has the bloodline of the Kushinada, but all that has been a legend or so she thought until one day, a guy, named Kusanagi appears and threatens to kill her!

This is all that Momiji needs before school! And if that's not enough, she finds out she is a twin and said twin died recently and now, Aragami, plant like creatures spawned by Orochi from Japanese myth, are threatening to kill her due to her blood lineage as she is the only one to put them to sleep once again!

Momiji won't be alone as she will help and join a specialized unit called the T.A.C. Action, suspense, some adult humor and story, Blue Seed is one of those animes that any fan of Japanese animation should check out if you want a taste of 90's aesthetic animation and story. Opening theme is action packed and just as I remembered from those old ADV Films trailers. Ending theme is soothing to hear. Expect Omake's as well for some slap stick humor as well!

A full 26 episode series which will keep you from getting bored (can't say that about half of the anime nowadays that go for 12 or 13 episodes).

I'm bias as this was one of my favorite shows watching.

errorfound482
4.0 out of 5 stars SDBD-Standard Def in Blu Ray
Reviewed in the United States on February 10, 2019
Verified Purchase
I did not know what SDBD meant, but found out when I got it. It's DVD quality on a Blu-Ray disc. Fortunately I was expecting it from reading reviews. What's convenient is you get everything in 1 disc (The entire TV series, Blue Seed Beyond and specials) and there's English or Japanese audio (and of course English Subtitles).. Given how hard it is to find Blue Seed anywhere now, I'm really happy to get it. Just realize this is DVD quality.
Read more
One person found this helpful
Helpful
Comment Report abuse

Robert M.
5.0 out of 5 stars My favorite anime.
Reviewed in the United States on March 14, 2011
Verified Purchase
Blue Seed is my favorite anime ever. I've seen all the Hayao Miyazaki films, I've seen other anime series good and bad, and I'm a fan of Cowboy Bebop.

But Blue Seed is my favorite. Why? Because of the creativity of the show, loveable characters, my favorite anime heroine ever: Momiji Fujimiya, and the fact that the last 6 episodes of the series always keep me on the edge of my seat and bring tears to my eyes.

There are other flashier shows, more famous shows. But this one has more heart than many. Unlike crap like Neon Genesis Evangelion, you actually care about the characters and the plot, and by the end of the series, you feel like you've been rewarded for watching all 26 episodes. With Evangelion, you felt like you were being punished by the last 6 episodes.

Momiji Fujimiya is my favorite anime heroine, because of her selfless courage, she's not a superwoman warrior but she doesn't let that stop her, her believeable insecurities around her crush Kusanagi and she is voiced by the greatest female voice actor on Earth: Megumi Hayashibara.

The 13 omakes that come with the tv series are by and large priceless and worth watching again and again.

I wish I could say that Blue Seed Beyond was more of the same, but it wasn't. The characters were the same and it was nice to see them in action together again. But the plot of the first two episodes was too rushed, and the third episode had nothing to do with either the series or the first 2 episodes of Beyond aside from the characters. It was worth getting with the rest of the series though, because of the 14th omake that was included as an extra on the Blue Seed Beyond disc. For a Momiji and Kusanagi fan like me, it had all the heart and soul that Beyond should have had.

It pains me that this series isn't better known and appreciated. Hopefully someday there will be a big revival of interests in this show and other works by creator Yuzo Takada.
Read more
8 people found this helpful
Helpful
Comment Report abuse

Matthew J. Simmons
5.0 out of 5 stars Blue Seed; Complete Collection
Reviewed in the United States on February 3, 2014
Verified Purchase
i am a big fan of Animea if you like Animea this is a good one to buy
cuz this is a good dvd.
Read more
Helpful
Comment Report abuse

kyren_mommy
5.0 out of 5 stars Nice
Reviewed in the United States on March 9, 2013
Verified Purchase
I have been looking for this series for a while. It is way exciting and a great adventure. Highly suggest it if your an anime/manga freak.
Read more
One person found this helpful
Helpful
Comment Report abuse
See all reviews