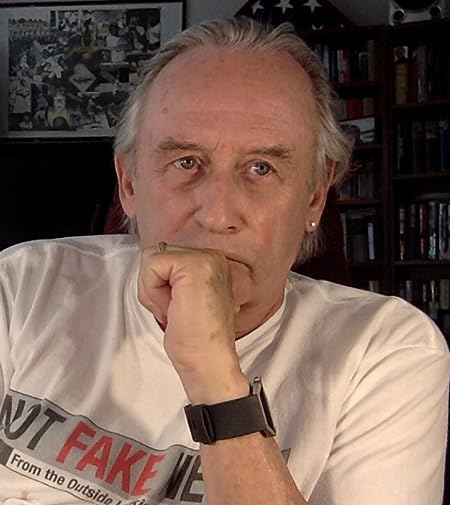 It was September 2017 and Donald J. Trump, the 45th President of the United States, was attacking the mainstream media with increasing intensity, claiming that any newspaper, magazine, or television news story that called him out for his regular exaggerations and lies constituted “fake news.”

Journalists, he famously said in the summer of 2019, are the “Enemy of the People.” But long before that, I decided I just couldn’t take it anymore. I had to use whatever talent I have and platform that I could find to somehow resist this constant harangue of the media – except, of course, for his committed followers, Fox News, Breitbart and the like.

So, I decided to launch a blog, to begin commenting on the day’s news and, when appropriate, call out Trump for his lies and distortions. Who was I to do this? I was not famous, just a retired former journalist, freelance writer and communications guy. But, I thought, why not? Even if nobody pays attention, at least you won’t be standing by, silently letting this liar and demagogue go unchallenged.

My background and experience had brought me in touch with many colleagues and friends, who I thought might form the nucleus of my initial audience through the reach provided by Facebook, Twitter and LinkedIn. To a large extent, I was right.

Now, after some 1,000 blogs since the inception, our audience is worldwide, with readers – and members – from as far away as China, Thailand, Ireland, Pakistan, Great Britain, German, the Netherlands, Spain, Malaysia, the Philippines, and several other countries. We have a growing following of members and subscribers from across the U.S., some of whom offer invaluable suggestions for topic for us to cover.

My career began as a community newspaper reporter with the Pittsburgh Courier, written for the African American audience in that city. After a brief tenure there, I worked for two daily newspapers, the Jeannette, PA, News-Dispatch, where I gave away papers on the street when President Kennedy was assassinated, and the Greensburg Tribune-Review, which sent me out to cover “the story of the century,” the reported landing of a UFO in a farmer’s field about 40 miles east of Pittsburgh.

From there, I went to United Press International in Harrisburg, before being named bureau chief at the state capital bureau in Trenton, NJ, which is where I worked when assigned to cover the 1968 Democratic Convention in Chicago, renowned for teargassing of journalists covering antiwar protests by Chicago police.

By then, I had journalism hardwired into my soul.

My goal was to go to Washington and work on Capitol Hill or the White House for UPI. But impatient with the lack of opportunity, I accepted a position as press secretary to a new Congressman from New Jersey, the late Edwin B. Forsythe (R), and then after five years, became chief of staff for Rep. James J. Florio (D), who later became governor of New Jersey.

It was from this business that I retired in 2016, moved to Myrtle Beach, SC for family reasons, voted for Hillary Clinton (despite the catcalls that I endured from some local good-ole-boys with whom I played softball), hooked up with the county Democratic Party, and finally, launched my blog.

Why “Not Fake News”?

What to call it? That was an important question. After about 15 minutes of thought, I decided it would be “Not Fake News” – because my intention was to challenge Trump’s own fakery with my fledgling platform. Made sense to me.

I also decided that Not Fake News would be more than simply a “hate Trump” online rant; that it would have solid content and include entries about interesting, special people; about stories in the news that struck me as funny or poignant or otherwise important and worthy of discussion.

Soon, I invited some of my colleagues to contribute articles to Not Fake News. That’s how my co-author, Chris Waldron, entered the picture. I saw a piece he wrote on Facebook and thought, “Wow, that would be perfect for Not Fake News.” Now, he is a prolific contributor to this blog, bringing excellent writing, terrific analysis and perspective to our content. We rarely miss a day, and we often publish two, even three blogs in one day.

This book also includes blogs by several other terrific writers, including Stacy Fitzgerald, with whom I worked in Washington, and Stacie Pearman, Susan Hutchinson, and Steve Hamelman, all members of the communications team that I lead for the local county Democrats. Several other talented writers also have contributed, but less frequently.

Wanting to expand the brand, I launched a Not Fake News YouTube channel, which includes occasional interviews and the Bob & Jackie Show, which I co-host with my hilarious wife, Jackie Cristiano.

Then, deciding to take advantage of every possible format, I launched the NFN Radio News podcast, which includes narrated versions of our Not Fake News blogs, with additional commentary, and interviews with interesting people. That podcast is hosted on Podbean at https://nfnradionews.podbean.com. It also can be found on Tumblr, Spotify, Soundcloud, i-Tunes, and GooglePlay.

So, there you have it – that’s the story of Not Fake News. For this book, we’ve selected blogs that provide a contemporary history of important national developments since September 2017, of course with our own perspective. 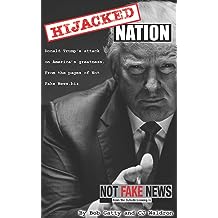 Hijacked Nation: Donald Trump's attack on America's Greatness. From the pages of Not Fake News.biz Jun 25, 2020
by Bob Gatty, C J Waldron
( 9 )
$4.99
Hijacked Nation offers a virtual play-by-play of the tragedy of the Donald Trump presidency as it has unfolded since his election to the presidency. We pick up the story beginning in September 2017 when the Not Fake News.biz blog was launched, running until today, June 26, 2020.

These past two-plus years have been a time of historic discord in America, marked by the failure of Donald J. Trump, the reality television personality who was elected president in November 2016, to effectively respond to the responsibilities of the presidency and to lead our nation effectively through these difficult times.

We, the writers at Not Fake News.biz, have chronicled many of these developments and offered our perspective as these historic events have unfolded. We will continue to do so, “From the Outside, Looking in.”

Hijacked Nation is written by Bob Gatty, a veteran journalist and communications expert, and Chris Waldron, a college English professor, who are both determined to call out the mean presidency of Donald Trump, prosecuted by an insecure, vicious, vindictive man who has little regard for the people he has sworn to protect and defend.

Through daily blogs reporting on major developments, political and otherwise, Hijacked Nation is organized in the following chapters:

1. Attacks on the Media & Other News
2. Trampling the Constitution
3. The continuing sin of racism
4. The guns obsession
5. The battle over healthcare
6. Trashing the environment
7. Blunders in foreign affairs
8. Immoral immigration policies
9. The impeached president
10. Politics & elections in the age of Trump
11. The coronavirus

Thus, we’ve selected blogs that provide a contemporary history of important national developments since September 2017, developments that will leave an indelible mark on the history of our nation. We do this, of course, from our own "lean to the left" perspective.

Hijacked Nation is must reaching for anyone concerned about the damage being done to our nation by Donald Trump and the Republican Party that he has effectively hijacked to do his bidding.
Read more
Other Formats: Paperback