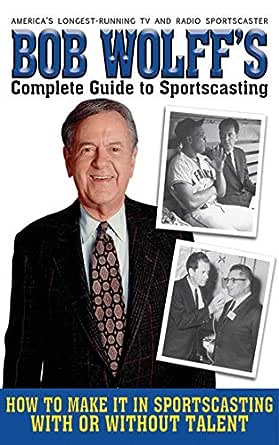 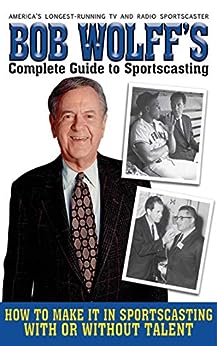 Bob Wolff's Complete Guide to Sportscasting: How to Make It in Sportscasting With or Without Talent Kindle Edition

"The distinctive voice of Bob Wolff has accompanied many of sports' most memorable moments. That voice conveyed talent and professionalism; but beyond that, his enduring good nature, and boundless energy and enthusiasm, make him a continuing marvel. It has always been a pleasure to listen to him. It has been an even greater pleasure to be his friend." --Bob Costas

"Bob Wolff was one of the most prominent voices of my youth. I learned so much from watching him back then and I consider his new book to be a gift to any aspiring broadcaster. No one understands better the history or `how to' part of our industry!" --Jim Nantz, CBS

"I had been on the air 26 years before I got to actually work with the great broadcaster and equally great teacher, Bob Wolff. To my delighted shock, I learned more from him about sportscasting in one hour of preparation than I had learned in nearly all of those preceding 26 years. Listen to this man!" --Keith Olbermann

"Bob is a hero to all of us who have attempted to follow in his footsteps. What you heard in his voice in the 50's is what you still hear today--genuine excitement and appreciation for the game he is covering, as well as the listener and viewer he is reaching. This book is a gift to all of us, just as Bob has been his entire career." --Chris Berman, ESPN

"Complete is a Bob Wolff word. I worked alongside Bob and complete describes him and his work. The young can learn and the old can enjoy. This book has it all." --Joe Garagiola

"Greatness is achieved by standing the test of time. With his class and dignified consistency, Bob Wolff has achieved that and more in his remarkable career. His is a story worth telling." --Mike Francesa, WFAN

"No one is better qualified to write a book on sportscasting than Bob Wolff. He's a legend with an unquenchable curiosity to learn about the events he covers and the people he interviews. The only thing more impressive than Bob Wolff the sportscaster is Bob Wolff the man." --Mike Breen, ESPN --This text refers to an alternate kindle_edition edition.

Bob Wolff is the longest running broadcaster in television and radio history, now in his ninth decade behind the microphone. The only broadcaster in history to call the championships of all four major pro sports, his historic calls include Don Larsen’s legendary perfect game in the 1956 World Series and the 1958 NFL Championship Game between the New York Giants and Baltimore Colts (“The Greatest Game Ever Played”). Wolff was the television and/or radio play-by-play voice of The New York Knicks and New York Rangers for twenty-seven years. In addition to his enshrinement in both the baseball and basketball Halls of Fame, he has also been honored with induction into Madison Square Garden’s Walk of Fame and the National Sportscasters and Sportswriters Hall of Fame. In 2009, the broadcast booth at Nationals Park in Washington was named in his honor. At the age of 92, Wolff is still sportscasting on television and radio. --This text refers to an alternate kindle_edition edition.