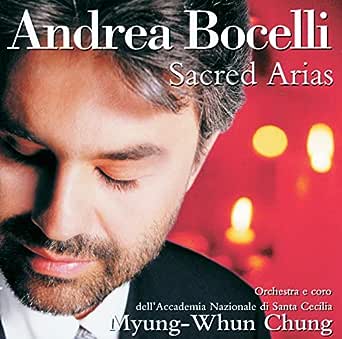 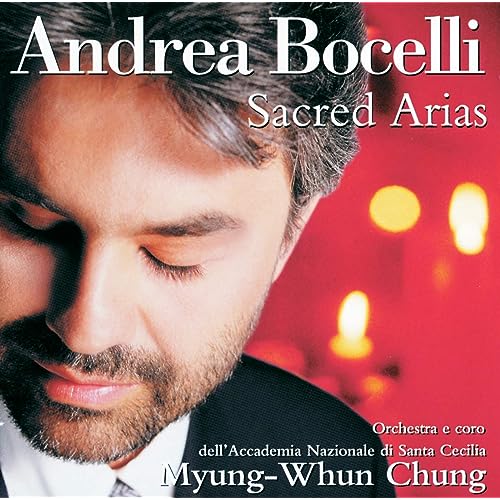 Listen Now
Your Amazon Music account is currently associated with a different marketplace. To enjoy Prime Music, go to Your Music Library and transfer your account to Amazon.com (US).

4.6 out of 5 stars
4.6 out of 5
474 global ratings
How are ratings calculated?
To calculate the overall star rating and percentage breakdown by star, we don’t use a simple average. Instead, our system considers things like how recent a review is and if the reviewer bought the item on Amazon. It also analyzes reviews to verify trustworthiness.
Top reviews

C. S. Liu
5.0 out of 5 stars Bravo Andrea!
Reviewed in the United States on May 28, 2020
Verified Purchase
I fell in love with Andrea Bocelli’s singing after his solo concert in Milan Duomo in Easter. I am not religious but these sacred arias sung by his heavenly voice moved me to tears. It is so healing when I hear his voice daily during this difficult time. This amazing man is a true gift of humanity for the Italians. Religious or not - this CD is a must buy because of the beauty of these music and Andrea’s voice.
Read more
3 people found this helpful
Helpful
Comment Report abuse

Antonia Baccari
5.0 out of 5 stars If you're looking for religious songs, Andrea Bocelli's Arias is beautiful.
Reviewed in the United States on November 12, 2019
Verified Purchase
Oh, My God. What a beautiful religious album sung by Andrea Bocelli!!! I melt just listening to this album of religious songs. I'm so glad I bought it.
Read more
3 people found this helpful
Helpful
Comment Report abuse

Fam. von Preussen Matsuyama
1.0 out of 5 stars Very disappointing. Sound quality isn't good.
Reviewed in the United States on October 14, 2020
Verified Purchase
I purchased this CD after the passing of my Father. I wanted it strictly for Ave Maria.
I am very disappointed by the poor quality of sound and by the terrible recording of these Church songs.
I have another CD from Andrea which came from Europe and the quality of sound is superb.
This CD really let me down. Waste of money.

Dagwood
5.0 out of 5 stars Bocelli's best CD
Reviewed in the United States on February 28, 2006
Verified Purchase
I think this is Bocelli's best CD, and highly recommend it to others, especially those who might think classical singing isn't for them. I first saw Bocelli in the DVD version of this same CD at a local shopping mall at Christmastime a few years ago, and just thought he looked cool standing there singing well. Eventually bought the Sacred Arias CD; loved it; played it over and over. Saw Bocelli live at the 15,000 capacity MCI Center in Washington in December 05 where he performed some of the same material; it was great; next day was dismayed to read snide newspaper review of "the man from Tuscany." Small voice? He filled up that auditorium in ringing tones, and delivered the goods. After seeing snide review rushed out to buy "best of Pavarotti" and "best of Domingo" CDs (used, on Amazon of course, to save money) for comparison. Liked Bocelli better. Also bought other Bocelli CDs, but like Sacred Arias best of all. I also cannot understand the put-downs of Bocelli vis-a-vis the other tenors. Pavarotti and Domingo are both singing hard on their CDs, as though engaged in a vocal athletic contest that each is trying hard to win. Why would I rather buy a Bocelli CD or go to a Bocelli concert than one by the others? The material? Maybe. But Bocelli has a more conversation tone in his singing (think Frank Sinatra versus Caruso) and has a straight-up noblility rather than continuous breathless desperation that I just like to listen to better. He's calm rather than frantic. His songs are moving rather than acrobatic and pyrotechnic. So although the opera snobs may rightly point out that the other tenor voices by their definition can achieve more (they can sing things other people can't sing), let them knock themselves out grooving with their favorites, but give me Bocelli to listen to.
Read more
22 people found this helpful
Helpful
Comment Report abuse

Tshop123Top Contributor: Coloring
5.0 out of 5 stars Andrea Bocelli - Sacred Arias
Reviewed in the United States on October 8, 2015
Verified Purchase
Truly one of Andrea Bocelli's best collections. I am a collector of all of his work, and he just gets better, and better with time. This is a man who is passionate about his wife and family, love of God, and no doubt a wonderful friend to those who know him. He is a gift to all of us...and he uses that God given talent perfectly; and with humility.
Read more
4 people found this helpful
Helpful
Comment Report abuse

truthseeker1
5.0 out of 5 stars ANDREA BOCELLI STRIKES GOLD!
Reviewed in the United States on November 9, 1999
Verified Purchase
This is what he has been working toward his entire career....singing classical Operatic pieces to touch the world...and those not aquainted with the style. Bocelli is his own man, with a unique intensity that touches the heart most profoundly. I've loved this man for over 2 years and he just gets better! The voice has a control and strength on this album lacking in the early versions he has cut of some of this same material. The orchestrations are ultra-lush, settings deeply respectful of the subject matter. Andrea sings with the warmth and sincerity of a true believer. This will be THE album of the Christmas season! Get a copy for yourself and enlighten your friends and relatives by purchasing a copy for them too! They'll love it and so will you!
Read more
8 people found this helpful
Helpful
Comment Report abuse

Blue Lucia
5.0 out of 5 stars Goosebumps!
Reviewed in the United States on December 12, 2002
Verified Purchase
Bocelli has assembled a wonderful collection of sacred arias, and he sings them with love and reverence. If his voice isn't as polished as Pavarotti's, he makes up for it with excellent interpretation and the wisdom to choose music that suits him well. He sings with a minimum of ornamentation, letting the beauty of the compositions and the clean, pure quality of his voice do the work. Don't get me wrong -- he's got a great vibrato, and a strong fortissimo, but he knows when to use them and when to sing with more reserve.
This is sacred music sung with real reverence. It gave me goosebumps the first time I heard it, and still does so dozens of plays later. Worth every penny!
Read more
4 people found this helpful
Helpful
Comment Report abuse

Mary A. Faderan
5.0 out of 5 stars Wonderfully sung, stirring the highest of emotions
Reviewed in the United States on October 5, 2000
Verified Purchase
I thoroughly recommend this CD by Andrea Bocelli. I bought this right after watching the PBS show of the same title. Bocelli is a singer who, despite his blindness, brings all of his talent to make a paean to the Sacred Being by singing a collection of arias dedicated to the Lord and His Mother. Bocelli's talent seems to blossom in this particular collection. I have other CDs by him that he previously did but his voice is much truer here than in the previous ones. Indeed, Bocelli is not a "true" opera star as some claim, but he is a gifted singer and sings from the heart which is the more important value. For me, there is no other artist who can summon up soaring visions of heavenly scenes, and stirring happy emotions than Bocelli in this oeuvre.
Read more
6 people found this helpful
Helpful
Comment Report abuse
See all reviews

Catherine K.
5.0 out of 5 stars Bocelli at his best!
Reviewed in the United Kingdom on June 25, 2018
Verified Purchase
This was a repeat order - I gave my own copy to a friend and she asked me to order one for her. Excellent value!!
Bocelli at his best. His love for his Holy Mother is in his voice.
Read more
One person found this helpful
Report abuse

mjcairney
5.0 out of 5 stars Nothing short of Excellence.
Reviewed in the United Kingdom on April 17, 2012
Verified Purchase
They say that nature compensates and she certainly has with Andrea Bocelli who was born with poor eyesight and then, at the age of twelve, lost his sight completely after an accident whilst playing football. However, Mother Nature has certainly compensated him, gifting him with a fantastic voice which has enabled him to sell millions of CDs. If you enjoy listening to a good Tenor, then just buy this CD, you will love it.
Read more
6 people found this helpful
Report abuse

J. A.
5.0 out of 5 stars Wonderful
Reviewed in the United Kingdom on March 2, 2020
Verified Purchase
Its Andrea Bocelli -- what more is there to say? Wonderful. Well packaged and great value.
Read more
Report abuse