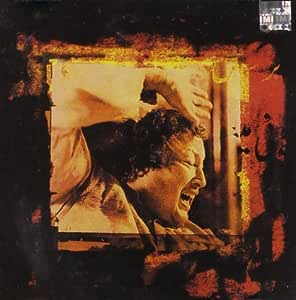 Recorded shortly before the qawwali master's death, Nusrat Fateh Ali Khan's posthumous album is brimming with rich vocal harmonies, upbeat Indian rhythms, and plenty of hand clapping. It is easy to understand why Ali Khan became such a celebrated figure, for his music exudes passion and warmth. However, given that Body and Soul features four cyclical tracks that sprawl over 68 minutes, it might not seem an ideal album for casual listeners. But even when played as background music, people should find themselves drawn to many of the amiable rhythms, even if some of the music runs a bit long. And Nusrat Fateh Ali Khan aficionados will be left to debate how Body and Soul measures up against the rest of his catalog. --Bryan Reesman

Thingfish33Top Contributor: David Bowie
5.0 out of 5 stars A great album of excellent tunes.
Reviewed in the United States on August 22, 2016
Verified Purchase
All things Ali Kahn are awesome. If you are looking at this you know what it is….just buy it.
Read more
Helpful
Report abuse

Joseph Rochetto
4.0 out of 5 stars Nusrat's Swan Song
Reviewed in the United States on March 17, 2002
As befits any great artist who is no longer with us, Nusrat's record label and estate apparently searched for more "product" to keep the name before the public and the sales flowing. I don't mean to disparage this album. I bought it today and have been playing it constantly. There is nothing really new here but what is here is as beautiful as any of Nusrat's more traditional work. I am not a big fan of his more "experimental" stuff with various westerner producers. But any of his traditional, religious work is enough to move me to a blissful state. I believe those people who distinguish the "religious" from the "love song" qawwalis are missing the point. They all speak of the same love.
The man's joyous love of God shines through even though I, like most westerners, have no idea what he is saying. This album, apparently recorded shorly before he died consists of tradtional, religious Qawwali's. I don't know enough about the songs or Nusrat's demise to speculate whether he made these songs with his own death in mind. But I like to imagine that he did.
I especially like the first cut: "Mayey Nee Main Dhak Farid Dey Jana" (Mother,I have to go to Farid) and the final cut:"Tasbeh Delik Ik Dhaneh" (Each and every rosary bead). I own several NFAK CD's and I probably don't like all the cuts on any of them. The same is true here. I could easily skip the third cut "Barsoon Kay Intizarka" (Waiting for years). One plus on this CD is the english translations, something I have not seen on his other CD's.
I do wish Amazon had picked a reviewer who was more knowledgeable and interested in Nusrat's work. Describing it as overly long but pleasant background music with lots of handclapping is sad. Nusrat deserves better, he has opened so many people's eyes to what they otherwise would never see.