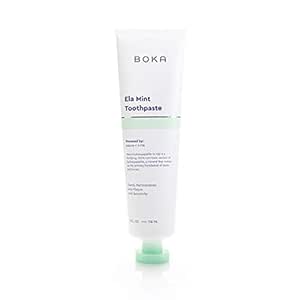 Save 15% when you receive 5 or more products in one auto-delivery to one address. Currently, you'll save 10% on your Mar 25 delivery.

Save 15% when you receive 5 or more products in one auto-delivery to one address. Currently, you'll save 10% on your Mar 25 delivery.

We'll send you a reminder before each delivery.
Save 10% now and up to 15% on repeat deliveries.
• No fees
• Cancel anytime
Learn more
Get it Friday, Jan 29
In Stock.
Qty:1
Deliver every:
2 months (Most common)
2 months (Most common)
Auto-deliveries sold by Boka Health and Fulfilled by Amazon
Share
Have one to sell?
Sell on Amazon

Boka Ela Mint Natural Toothpaste - Nano-Hydroxyapatite for Remineralizing and Sensitivity, Fluoride-Free I Dentist Recommended, Made in USA I 4oz 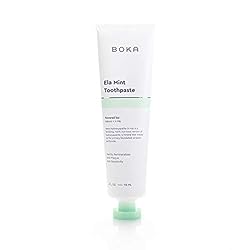 Boka Ela Mint Natural Toothpaste - Nano-Hydroxyapatite for Remineralizing and Sensitivity, Fluoride-Free I Dentist Recommended, Made in USA I 4oz
Page 1 of 1Start overPage 1 of 1
Previous page
Next page

Health Starts with Your Mouth

Ela Mint was created to address the “silent epidemic” in healthcare. Instead of fluoride (first used +100 years ago), our toothpaste features nano-hydroxyapatite (n-Ha), a modern evolution in dentistry that’s become a gold standard in Japan for over 40-years. Ela Mint features nano-hydroxyapatite, a modern evolution in medicine and dentistry (the mineral makes up the primary foundation of teeth and bones—that’s why it’s so restorative). Plus, it’s 100% non-toxic and fluoride-free.

Products are made in the same facility and on shared line as peanuts, tree nuts, dairy, eggs, and sunflower.

4.7 out of 5 stars
4.7 out of 5
3,003 global ratings
How are ratings calculated?
To calculate the overall star rating and percentage breakdown by star, we don’t use a simple average. Instead, our system considers things like how recent a review is and if the reviewer bought the item on Amazon. It also analyzes reviews to verify trustworthiness.

Sanpete
TOP 500 REVIEWER
4.0 out of 5 stars Alternative to fluoride? Notes on ingredients
Reviewed in the United States on March 14, 2020
Vine Customer Review of Free Product( What's this? )
Nano-hydroxyapatite (nHA) is a synthetic form of hydroxyapatite, itself a form of the calcium phosphate that makes up the majority of tooth material, including 97% of enamel. The nano part refers to the size of the tiny particles that make it up, suited to penetrating tiny openings in tooth enamel.

It was developed by NASA in the 1970s. The patent was sold to a Japanese company in 1978, and it's been sold in Japan for use in toothpaste since 1980. Studies show it's comparable to fluoride in various kinds of tooth surface repair, though it hasn't been tested nearly as much yet.

It's also been shown to help reduce some tooth sensitivity, believed to occur by blocking the dentin tubules associated with some sensitivity.

And there's some evidence it helps reduce harmful effects of some bacteria in the mouth.

The seller says in answer to questions the nHA concentration in this is 10%, an amount found effective in studies and in line with industry practices.

Safety studies are ongoing, but so far they've found nHA to be safe in the ways normally tested for.

The toothpaste cleans well in the ways I can detect, leaves my teeth feeling smooth and clean.

It has a strong minty flavor, with peppermint, spearmint, anise, wintergreen, mango, menthol and cardamom among the flavor ingredients.

The sweetening is from sorbitol, xylitol and stevia.

There's nothing about whitening in the description, but some of the ingredients do help remove surface stains. (Most "whitening" toothpastes don't do anything more than that.)

Not all of the ingredients are natural, but there's a lot of natural stuff in this.

The scrubbing ingredients are hydrated silica, silica, and a bit of baking soda.

Other cleansing agents include sodium lauroyl sarcosinate, which also helps foam, and methylsulfonylmethane, which is supposed to help with whitening and plaque and tartar control.

Potassium chloride can help with tooth sensitivity over time, though it's the last ingredient, so there doesn't seem to be a lot of it.

Sodium benzoate is used as a preservative.

"Made in the same facility and on shared line as peanuts, tree nuts, dairy, eggs, and sunflower."

Made in the US.

Bethany
3.0 out of 5 stars Disappointed.
Reviewed in the United States on June 18, 2020
Verified Purchase
As a dental hygienist, I had really high hopes for this toothpaste! I like the science behind the product and goal of remineralizing enamel with nano-hydroxyapatite, however, the toothpaste itself is lackluster. After using it twice daily for a month, my teeth definitely accumulated plaque and tarter quicker than with any toothpaste I’ve used recently. In addition, the ingredients didn’t agree with my tissues; over time I developed rough areas on the inside of my cheeks and lips due to irritation caused by the product. I switched back to my previous toothpaste and my situation improved within 1-2 days. Unfortunately, this isn’t a product I would recommend to my patients.
Read more
190 people found this helpful
Helpful
Report abuse

Lee
5.0 out of 5 stars All Other Toothpaste is Inferior!
Reviewed in the United States on April 16, 2020
Verified PurchaseEarly Reviewer Rewards(What's this?)
Every time I travel and can't bring my full sized tube of Boka Ela Mint with me, I relish the first time I brush my teeth after returning home. I feel like my teeth are never fully clean when I'm using anything other than Boka toothpaste. I have to note - this toothpaste takes a little bit of adjustment. It doesn't foam up or have that "minty fresh" (read: astringent) feeling like standard commercial toothpastes. Those are marketing tricks that we've been conditioned to associate with a clean mouth and are actually not helping your dental hygiene at all. That "fresh" feeling? It's caused by added alcohol - obviously not good for your oral hygiene. Boka uses none of those tricks. With Boka Ela Mint, my teeth FEEL clean all day long and my breath has never been fresher. Again, it takes a little time to de-program yourself from the standard features of big-brand toothpastes but it is so worth it. I don't know much about the nano technology but I DO know that my gums are terribly recessed and every time I go into the dentist, she asks me if I've got tooth sensitivity (in a way that makes it clear she assumes I SHOULD have sensitivity because how bad this problem is) and I honestly don't. She also compliments my oral hygiene every time I'm in there. I attribute this all to the toothpaste. I love it and won't go back. My only gripe is that it doesn't come in travel size!
Read more
53 people found this helpful
Helpful
Report abuse

Katherine
1.0 out of 5 stars Subpar Hydroxyapatite Paste
Reviewed in the United States on August 27, 2020
Verified Purchase
My personal experience with Hydroxyapatite toothpaste... I’ve been researching them and trying them for about 3 years now. I discovered they are the staple for oral care in Japan. The one I love is called CTx3 Gel. I tried this Boka mint flavor, and my teeth don’t feel as clean or smooth after using it. The CTx3 leaves my teeth feeling smooth and glass-like against my tongue. So for me personally, this Boka is subpar. There are some pretty expensive hydroxyapatite toothpastes on Amazon, but the CTx3 I’ve found to be the perfect combo of cost-effective and effective overall. After using the Boka, my teeth still feel “dirty” and the plaque is not removed. I use my same toothbrush with the CTx3- and they feel like I just had a dental cleaning. Trust me on this guys.... If you have been experimenting with hydroxyapatite toothpastes- you will notice the difference when trying Boka. If it’s your first, you probably won’t have the slightest idea....
Read more
36 people found this helpful
Helpful
Report abuse

My dentist says my teeth look amazing every visit and I haven't had any new cavities. The Taste is wonderful without being artificial or overpowering or too minty.

I will not use any other brand at this point, and, I've been using this brand for over a year now. I don't believe in using fluoride toothpaste anymore now that I've done the research. This is far superior and much better for cavities and sensitivity.
Read more
28 people found this helpful
Helpful
Report abuse

Pat Kellim
5.0 out of 5 stars great for sensitive teeth
Reviewed in the United States on April 29, 2020
Verified PurchaseEarly Reviewer Rewards(What's this?)
I've been using sensodyne toothpaste and restore mouthwash for years to help my sensitive teeth. they helped a little. then i tried this toothpaste and noticed a big improvement right away. i'll be using this from now on.
Read more
30 people found this helpful
Helpful
Report abuse
See all reviews