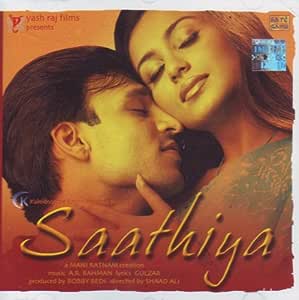 The album opens with the title song Saathiya, a melodious number with the rich flute solos and guitar accompaniment in the backdrop. Lyrics by Gulzar are good and Sonu Nigam rendition is appreciable. The album then gets into a festive mood with Chalka Chalka Re sung by Richa Sharma, Mahalaxmi, Vaishali, and Shoma. The song is a wedding number with a distinct South Indian flavor. On the whole Saathiya has one of the most commendable compositions by Rahman. Gulzar s meaningful words enrich the album. --apunkachoice.com

4.9 out of 5 stars
4.9 out of 5
6 customer ratings
How does Amazon calculate star ratings?
Amazon calculates a product’s star ratings based on a machine learned model instead of a raw data average. The model takes into account factors including the age of a rating, whether the ratings are from verified purchasers, and factors that establish reviewer trustworthiness.
Top Reviews

NomNom Chompsky
5.0 out of 5 stars Another masterpiece from A.R. Rahman
Reviewed in the United States on January 27, 2013
A.R. Rahman borrowed most of the tracks from this movie from "Alaiputhiye", but the tracks are extremely good. I am listening to these tracks more than 10 years after it was first released - that's how good the album is. At times, it seems like Rahman tries to bring in Michael Jackson-ish beats into his music (like in "Humdum Suniyo Re", but it always works. My favourites:

Chupke Se - A song about longing.
O Humdum Suniyo Re - The opening track to the movie.
Aye Udi Udi Udi - A song about the high point of newly-married Viveik Oberoi and Rani Mukerji's troubled marriage.
Mera Yaar Mila De - Accompanies the movie when Viveik goes in search of Rani, who is a volunteer doctor in rural India.
Saathiya - A beautifully composed and choreographed sequence.

Songs like these deserve to be played again and again on your music player.

Z.B
4.0 out of 5 stars A. R. Rahman Rocks
Reviewed in the United States on March 26, 2011
Sonu Nigam's syrupy sweet vocals do wonders for the title track. Gulzar's lyrics are a breath of fresh air and he seems to be in fine form here. Rahman has created a very soft and soothing number, and Shaad Ali seems to have done justice to it by picturising it beautifully as it's evident from the trailers.
Read more
Helpful
Comment Report abuse

Z.B
5.0 out of 5 stars A.R.Rehman
Reviewed in the United States on May 13, 2011
The master music composer and oscar award winner A.R.Rehman has given the bollywood industry many hit songs.This album is a collection of few of them.
Read more
Helpful
Comment Report abuse
See all reviews from the United States