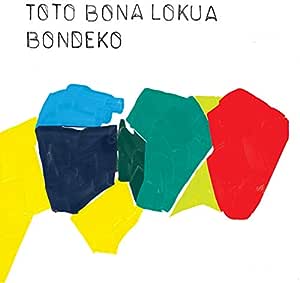 TOTO BONA LOKUA (Artist) Format: Audio CD
4.7 out of 5 stars 5 ratings
See all 3 formats and editions Hide other formats and editions
Includes FREE MP3 version of this album.&nbspProvided by Amazon Digital Services LLC. Terms and Conditions. Does not apply to gift orders.&nbspComplete your purchase to save the MP3 version to your music library.
Available at a lower price from other sellers that may not offer free Prime shipping.

2018 release, the first album in 13 years from the acclaimed trio. Martinican Gérald Toto, Cameroonian Richard Bona and Congolose Lokua Kanza made one of No Format's first albums in 2004. Three voices that are equal, three singular careers, three quite distinct universes with one thing in common, like a nutritive sun, more or less distant : Africa. Sensitive, carnal, colored, alive and lived by Richard and Lokua - the former from the Cameroon, born on a plateau named Adamaoua, between the savannah and the virgin forest, the latter from the Congo - both linked by the might of the Congo river sweeping along the myths and reality of a timeless Earth - and the experience of exile, the discovery of ultra-contemporary cosmopolitanism tinted with the nostalgia that belongs to diasporas. Inherited, confiscated for Gérald, a Caribbean born in Paris, carried away in turn on the great drive of his deported ancestors, in the vanguard, despite himself, of this new, crossbred world that is to come, already here, there and elsewhere.

woahwoahwoahwhat
5.0 out of 5 stars What a Spectacular Album. Puts a Smile Right on Your Face.
Reviewed in the United States on February 26, 2018
Verified Purchase
From the opening notes of Bondeko, Toto Bona Lokua's brand of inviting and evocative world music is a gift to listeners. It's driven by an unconventional energy--not the kind that manifests in the form of volume and speed or even intensity, but rather in something like the combination of laser-precision and free-spiritedness that characterizes their instrumental arrangements, or the way their voices twirl across each other and bind together in a flawless braid of harmony that can be chilling or warming depending on the band's intent.

In a song like the album's opener "Ma Mama," the group takes a sunny approach, shuffling and bopping in an irresistibly joyful flamenco-infused pop romp. "Youwile" is like a haunting story told by candlelight, with a husky baritone rumbling through a mist of jazz guitar. And the exultant "Thitae" swoops and soars with a hint of spirituality as the trio's voices explore the freedom to flip into an improvisational falsetto while the drums handle both the rhythm and the low notes. These are just a few examples of the diversity in the sound, but rest assured: the band has much more to offer beyond this.

Each song on this album is breathtaking in its own right, defined by subtlety and control but benefitting from a chemistry among the band members that is palpable throughout. If you're a fan of Seu Jorge or Ladysmith Black Mambazo, you'll find something to like here, but Bondeko is truly incomparable; though its style may be similar to others, its arrangements and delivery will ensure this release tucks itself into your chest.

Guessann
5.0 out of 5 stars This album is simply spectacular, lethal trio
Reviewed in the United States on April 22, 2020
Audiophile and music enthusiast here. If you're looking for some chill, laid back, soothing African music, look no further. This trio made up of Richard Bona, Lokua Kanza, and Gerald Toto like having Michael Jordan, LeBron James, and Kobe on your team, lethal!
Read more
Helpful
Comment Report abuse
See all reviews

David P. Weber
5.0 out of 5 stars Top Album
Reviewed in the United Kingdom on August 20, 2018
Verified Purchase
This is an excellent album-- from start to end a smooth mood is maintained. Open your mind to new African sounds.
Read more
Report abuse
See all reviews