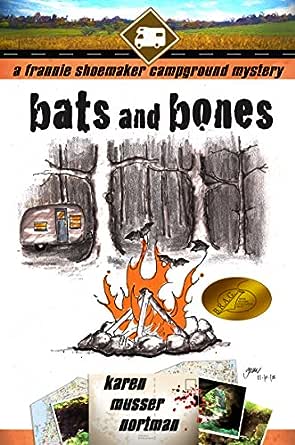 You've subscribed to The Frannie Shoemaker Campground Mysteries! We will preorder your items within 24 hours of when they become available. When new books are released, we'll charge your default payment method for the lowest price available during the pre-order period.
Update your device or payment method, cancel individual pre-orders or your subscription at
Your Memberships & Subscriptions
There was an error. We were unable to process your subscription due to an error. Please refresh and try again. 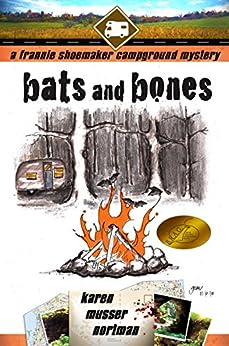 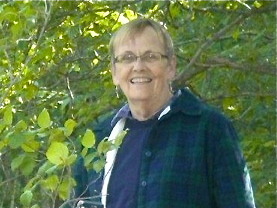 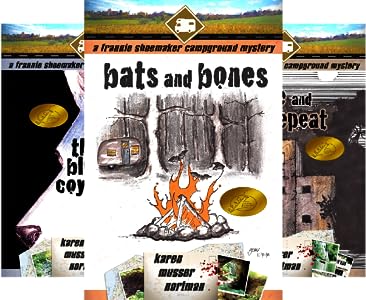 Karen Musser Nortman, after previous incarnations as a secondary social studies teacher (22 years) and a test developer (18 years), returned to her childhood dream of writing a novel. Bats and Bones, a cozy mystery, came out of numerous ‘round the campfire’ discussions, making up answers to questions raised by the peephole glimpses one gets into the lives of fellow campers. Where did those people disappear to for the last two days? What kinds of bones are in this fire pit? Why is that woman wearing heels to the shower house? Karen and her husband Butch originally tent camped when their children were young and switched to a travel trailer when sleeping on the ground lost its romantic adventure. They take frequent weekend jaunts with friends to parks in Iowa and surrounding states, plus occasional longer trips. Entertainment on these trips has ranged from geocaching and hiking/biking to barbecue contests, balloon fests, and buck skinners’ rendezvous. Frannie and Larry will no doubt check out some of these options on their future adventures. Karen has three children and eight grandchildren. She also loves reading, gardening, and knitting, and can recite the 99 counties of Iowa in alphabetical order.

4.5 out of 5 stars
4.5 out of 5
170 customer ratings
How does Amazon calculate star ratings?
Amazon calculates a product’s star ratings based on a machine learned model instead of a raw data average. The model takes into account factors including the age of a rating, whether the ratings are from verified purchasers, and factors that establish reviewer trustworthiness.
Top Reviews

Mystic Miraflores
VINE VOICE
4.0 out of 5 stars A weak mystery plot gets 3 stars; good RV tips and recipes get 5 stars. Average score: 4 stars.
Reviewed in the United States on July 20, 2017
Format: Kindle EditionVerified Purchase
I give this book 3 stars for the mystery and 5 stars for the RV tips and recipes. I averaged the final review to 4 stars. My husband and I have rented RVs in the past and finally bought our own last month, so the author's advice on the motor camping life was valuable. The mystery, however, was just so-so. Frannie took an instant dislike to the murderer upon meeting the person. I thought to myself: The murderer can't be revealed in the first few chapters already! This has to be a red herring. But it wasn't and I felt this was a weak point of the book. There was no ultimate surprise. Another weak point to the plot was that Frannie and her friend was discovered in the woods by the murderer and kidnapped. It's not like she figured out the mystery 100% yet at that point, but sort of stumbled onto the final conclusion. I definitely felt the mystery plot was very weak.
Read more
3 people found this helpful
Helpful
Comment Report abuse

Brenda Telford
5.0 out of 5 stars A great cosy mystery!
Reviewed in the United States on June 30, 2013
Format: Kindle EditionVerified Purchase
Retired couple Frannie and Larry Shoemaker, along with Larry's sister Jane Ann and husband Mickey, and friends Donna and Rob arrived at the Bat Cave State Park camping ground for the July 4th long weekend, each in their own camper. They loved camping, relaxing and enjoying their surroundings, and made sure they got together quite often. They had no idea this weekend was going to be very different to their previous trips away!

The heat was intense; when they had unpacked they relaxed in their chairs and watched the camp come to life. They were amused by the big camper, loaded with half a dozen guys trying to get set up, and when camp supervisor Maeve Schlumm came stomping up to inform them they were in the wrong spot, tempers flared.

The following morning the six of them decided to go for a walk, early, before the heat got intense, through the forest towards the caves in the area. They were currently closed, but the friends could enjoy the walk anyway. When they discovered a body in the mouth of one of the caves, their weekend began to go very wrong. Everyone in the camping ground were confined to the site while the sheriff and his deputy tried to put the very sparse clues together, also to make sure a possible killer didn't get away.

With Frannie innocently questioning events, she and her friends were drawn into the investigation. Suddenly Mother Nature, a killer, stressed strangers and another body all combined to make it very dangerous for Frannie and her friends. Would the killer be caught before anything else happened? Would the state park reveal any secrets?

This was a great book! I thoroughly enjoyed the three couples and their interactions with each other, and other campers. The descriptions of the areas in the state park, the enjoyment of sitting around the camp, relaxing, playing cards or reading, befriending young five year old River and his mother Stephanie; I could see everything the author was describing which made me feel I was there at times.

An enjoyable cosy mystery I have no hesitation in recommending.

Lisa Brunette
4.0 out of 5 stars A hybrid cozy mystery / humorous how-to
Reviewed in the United States on June 28, 2015
Format: Kindle EditionVerified Purchase
What a brilliant introduction to the world of "glamping," aka "glamor camping." A hybrid between the cozy mystery and the humorous 'how-to,' Bats and Bones is the perfect way to learn about recreational vehicle camping. The author's sensibility is folksy and cleverly funny, and her characters are the kind of people you'd want to take on a camping trip. The twists in the murder-mystery nicely surprised me, and the plucky Frannie is an easy character with whom readers of all ages can connect. Each chapter ends with helpful camping tips, too. I enjoyed this first book and look forward to reading more in the series.
Read more
3 people found this helpful
Helpful
Comment Report abuse

Deborah Bettis
5.0 out of 5 stars GREAT BOOK - WILL BE READING THE ENTIRE SERIES
Reviewed in the United States on December 27, 2016
Format: Kindle EditionVerified Purchase
My first introduction to this author was a short free book she offered on a facebook camping page I belong to. The book was called A Campy Christmas, short and nice for a evening's read. Since we are avid campers and missing camping so much this time of year it was fun to read about the character's camping adventures.. Very nice heartwarming story which is SO refreshing to read nowadays!!! So good that as soon as I finished it I immediately purchased the first in the series Bats and Bones, read it and am now hooked on Frannie's adventures and solving mysterious murders and missing people!! Lots of twists and turns, suspense, fun and camping tips! A very nice and pleasant surprise was once I finished Bats and Bones at the end there was an offer for the next book free, The Blue Coyote!!! So now I'm set for some more adventure with Frannie and her crew. I will definitely be reading all the books in this series and I'm counting on their adventures to get me through the rest of the winter until camping season again. ....thanks so much to this great author for sharing her stories with us!!
Read more
One person found this helpful
Helpful
Comment Report abuse

MrsBucklin
5.0 out of 5 stars Loved it!
Reviewed in the United States on May 16, 2018
Format: Kindle EditionVerified Purchase
I loved this book because of all the twists and turns. It was a great mystery while also show casing camping. I would recommend this book to anyone that loves to camp and enjoys getting swept up in a good book.
I am so glad we happened to be camping in the same campground as the author last year. She gave our group a book to read and I've been hooked ever since. I've decided I cannot read them in the winter months as they make me long to camp.
Read more
One person found this helpful
Helpful
Comment Report abuse

johnc57
4.0 out of 5 stars A very good first book in a cozy mystery series
Reviewed in the United States on September 16, 2013
Format: Kindle EditionVerified Purchase
Frannie and Larry Shoemaker are retired couple who went camping with their friends and relatives. They hoped for a long quiet weekend, but found themselves right in the middle of a murder investigation (they stumbled upon a dead body on a hiking trail), bad weather and other unpleasant things instead. Frannie found some clues to the crime by accident, so she happened to be one of the characters who finally were able to unravel the mystery.

Considering the price for this book on Amazon (it was practically free) this book worth much more. I really like the banter between Larry and his brother-in-law Mickey. The mystery was interesting and the plot intriguing enough. It was the author's first book and as such it has some weaknesses which can be easily overlooked if you consider the book's strengths.

The final rating is 3.5 stars rounded up for the solid first effort.
Read more
One person found this helpful
Helpful
Comment Report abuse
See all reviews from the United States