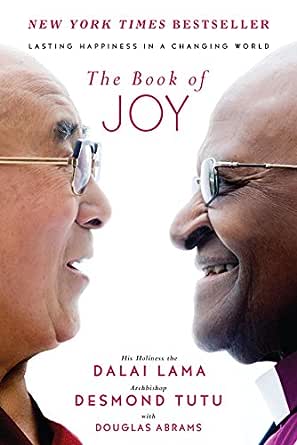 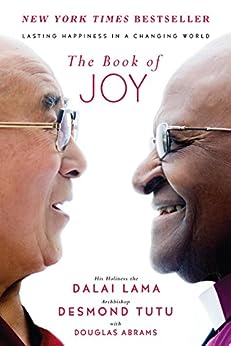 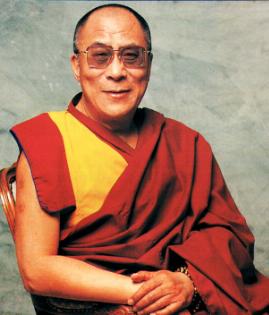 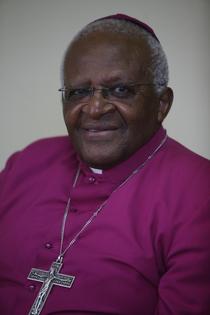 The Book of Joy: Lasting Happiness in a Changing World Kindle Edition

“The question may be timeless, but their answer has urgent significance.”
—Time Magazine

"[An] exquisite book...An intimate glimpse into the minds of two of the world's spiritual guides, and their foundation for an attainable and practical approach to experiencing a more enriching and sustainable life of abundant joy."
—Shelf Awareness

"This sparkling, wise, and immediately useful gift to readers from two remarkable spiritual masters offers hope that joy is possible for everyone even in the most difficult circumstances, and describes a clear path for attaining it."
—Publishers Weekly

"The world needs joy and compassion more than ever before – and who better than Archbishop Tutu and the Dalai Lama to show us how it is done. This beautiful book takes us on the journey of their friendship and gives us the gift of their wisdom. A bright spot of hope and love in this world."
—Sir Richard Branson

"It's a book that transports you deep within the intimate friendship that binds these two incredible souls. And it’s a book that vividly probes the very nature of joy itself — the illusions that eclipse it, the obstacles that obscure it, the practices that cultivate it, and the pillars that sustain it."
—Rich Roll, The Rich Roll Podcast

Dalai Lama (Author) His Holiness the Dalai Lama is the spiritual and political leader of Tibet. Today, he lives in exile in Northern India and works tirelessly on behalf of the Tibetan people, as well as travelling the world to give spiritual teachings to sell-out audiences. He was awarded the Nobel Peace Prize in 1989. Desmond Tutu (Author) The first black Archbishop of Cape Town, Tutu has won the Nobel Peace Prize for his leadership of the South African Truth and Reconciliation Commission and today is Chair of a group of former world leaders, The Elders, which aims to tackle some of the world's most intractable problems. He has helped calm the political crisis in Kenya and regularly speaks out against Mugabe, Israel, the Iraq War and the Burmese junta, but is also noted for his irrepressible sense of humour and deep spirituality. He lives in South Africa but travels widely. --This text refers to the hardcover edition.

“Is joy a feeling that comes and surprises us, or is it a more dependable way of being?” I asked. “For the two of you, joy seems to be something much more enduring. Your spiritual practice hasn’t made you somber and serious. It’s made you more joyful. So how can people cultivate that sense of joy as a way of being, and not just a temporary feeling?”

“Let me ask you,” the Archbishop jumped in. “You’ve been in exile fifty-what years?”
“Fifty-six.”
“Fifty-six years from a country that you love more than anything else. Why are you not morose?”
“Morose?” the Dalai Lama asked, not understanding the word. As Jinpa hurried to translate morose into Tibetan, the Archbishop clarified, “Sad.”

The Dalai Lama took the Archbishop’s hand in his, as if comforting him while reviewing these painful events. The Dalai Lama’s storied discovery as the reincarnation of the Dalai Lama meant
that at the age of two, he was swept away from his rural home in the Amdo province of eastern Tibet to the one-thousand-room Potala Palace in the capital city of Lhasa. There he was raised in opulent isolation as the future spiritual and political leader of Tibet and as a godlike incarnation of the Bodhisattva of Compassion. After the Chinese invasion of Tibet in 1950, the Dalai Lama was thrust into politics. At the age of fifteen he found himself the ruler of six million people and facing an all-out and desperately unequal war. For nine years he tried to negotiate with Communist China for his people’s welfare, and sought political solutions as the country came to be annexed. In 1959, during an uprising that risked resulting in a massacre, the Dalai Lama decided, with a heavy heart, to go into exile. The odds of successfully escaping to India were frighteningly small, but to avoid a confrontation and a bloodbath, he left in the night dressed as a palace guard. He had to take off his recognizable glasses, and his blurred vision must have heightened his sense of fear and uncertainty as the escape party snuck by garrisons of the People’s Liberation Army. They endured sandstorms and snowstorms as they summited nineteen-thousand-foot mountain peaks during their three-week escape.

“One of my practices comes from an ancient Indian teacher,” the Dalai Lama began answering the Archbishop’s question. “He taught that when you experience some tragic situation, think about it. If there’s no way to overcome the tragedy, then there is no use worrying too much. So I practice that.” The Dalai Lama was referring to the eighth-century Buddhist master Shantideva, who wrote, “If something can be done about the situation, what need is there for dejection? And if nothing can be done about it, what use is there for being dejected?”

The Archbishop cackled, perhaps because it seemed almost too incredible that someone could stop worrying just because it was pointless.

“Yes, but I think people know it with their head.” He touched both index fingers to his scalp. “You know, that it doesn’t help worrying. But they still worry.”

“Many of us have become refugees,” the Dalai Lama tried to explain, “and there are a lot of difficulties in my own country. When I look only at that,” he said, cupping his hands into a small circle, “then I worry.” He widened his hands, breaking the circle open. “But when I look at the world, there are a lot of problems, even within the People’s Republic of China. For example, the Hui Muslim community in China has a lot of problems and suffering. And then outside China, there are many more problems and more suffering. When we see these things, we realize that not only do we suffer, but so do many of our human brothers and sisters. So when we look at the same event from a wider perspective, we will reduce the worrying and our own suffering.”

I was struck by the simplicity and profundity of what the Dalai Lama was saying. This was far from “don’t worry, be happy,” as the popular Bobby McFerrin song says. This was not a denial of pain and suffering, but a shift in perspective—from oneself and toward others, from anguish to compassion—seeing that others are suffering as well. The remarkable thing about what the Dalai Lama was describing is that as we recognize others’ suffering and realize that we are not alone, our pain is lessened.

Often we hear about another’s tragedy, and it makes us feel better about our own situation. This is quite different from what the Dalai Lama was doing. He was not contrasting his situation with others, but uniting his situation with others, enlarging his identity and seeing that he and the Tibetan people were not alone in their suffering. This recognition that we are all connected—whether Tibetan Buddhists or Hui Muslims—is the birth of empathy and compassion.

I wondered how the Dalai Lama’s ability to shift his perspective might relate to the adage “Pain is inevitable; suffering is optional.” Was it truly possible to experience pain, whether the pain of an injury or an exile, without suffering? There is a Sutta, or teaching of the Buddha, called the Sallatha Sutta, that makes a similar distinction between our “feelings of pain” and “the suffering that comes as a result of our response” to the pain: “When touched with a feeling of pain, the uninstructed, ordinary person sorrows, grieves, and laments, beats his breast, becomes distraught. So he feels two pains, physical and mental. Just as if they were to shoot a man with an arrow and, right afterward, were to shoot him with another one, so that he feels the pain of two arrows.” It seems that the Dalai Lama was suggesting that by shifting our perspective to a broader, more compassionate one, we can avoid the worry and suffering that is the second arrow.

“Then another thing,” the Dalai Lama continued. “There are different aspects to any event. For example, we lost our own country and became refugees, but that same experience gave us new opportunities to see more things. For me personally, I had more opportunities to meet with different people, different spiritual practitioners, like you, and also scientists. This new opportunity arrived because I became a refugee. If I remained in the Potala in Lhasa, I would have stayed in what has often been described as a golden cage: the Lama, holy Dalai Lama.” He was now sitting up stiffly as he once had to when he was the cloistered spiritual head of the Forbidden Kingdom.

“So, personally, I prefer the last five decades of refugee life. It’s more useful, more opportunity to learn, to experience life. Therefore, if you look from one angle, you feel, oh how bad, how sad. But if you look from another angle at that same tragedy, that same event, you see that it gives me new opportunities. So, it’s wonderful. That’s the main reason that I’m not sad and morose. There’s a Tibetan saying: ‘Wherever you have friends that’s your country, and wherever you receive love, that’s your home.’” --This text refers to an alternate kindle_edition edition.
Read more