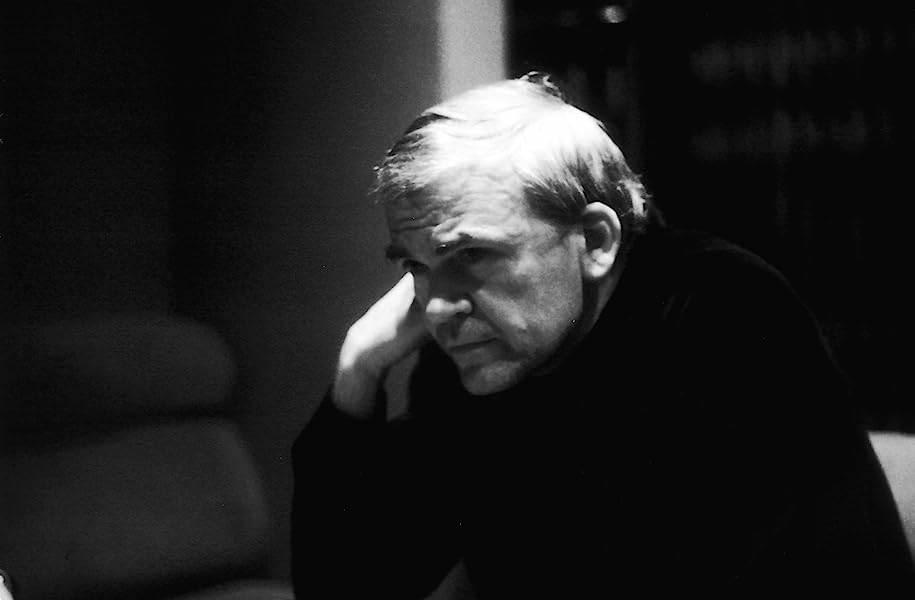 The Book of Laughter and Forgetting Paperback – April 7, 1999

""The Book of Laughter and Forgetting calls itself a novel, although it is part fairy tale, part literary criticism, part political tract, part musicology, and part autobiography. It can call itself whatever it wants to, because the whole is genius.""-- New York Times""This book, as it bluntly calls itself, is brilliant and original, written with the purity and wit that invite us directly in."-- John Updike, "New York Times Book Review"

Milan Kundera is the author of the novels The Joke, Farewell Waltz, Life Is Elsewhere, The Book of Laughter and Forgetting, The Unbearable Lightness of Being, and Immortality, and the short-story collection Laughable Loves—all originally written in Czech. His most recent novels Slowness, Identity, and Ignorance, as well as his nonfiction works The Art of the Novel, Testaments Betrayed, The Curtain, and Encounter, were originally written in French.

4.4 out of 5 stars
4.4 out of 5
301 global ratings
How are ratings calculated?
To calculate the overall star rating and percentage breakdown by star, we don’t use a simple average. Instead, our system considers things like how recent a review is and if the reviewer bought the item on Amazon. It also analyzes reviews to verify trustworthiness.
Top reviews

Mike Chronley
5.0 out of 5 stars Excellent book, Different cover than shown. Happy to have a physical copy
Reviewed in the United States on May 1, 2014
Verified Purchase
The only 'negative' I have about this purchase is that the cover of the book is actually flat white with the title and illustration drawn by Kundera himself, similar to the cover of Immortality done in the same style. This did not bother me at all, and I was actually kind of happy to have it the way Kundera wanted it to be presented but is worth noting if you are aesthetically invested in the book as pictured.

This book predates 'Unbearable Lightness of Being' and it's spiritual sequel 'Immortality' and you can see many of the themes from those emerging here. There is almost no narrative path connecting the entire book unlike the other two mentioned but as fans of Kundera might expect the whole work feels cohesive in a hard to explain way. The story shifts effortlessly between musings on the thematic intentions of classical composers to brutally objective descriptions of sexual debauchery. Even more than other books by this author this book almost requires repeat readings or extensive margin notes. Although the story never drags, it is often hard to get your bearings when you pick it up midway. The story is dense enough and Kundera's dry almost morbid humor is entertaining enough that reading in small chunks is not a waste but you will definitely reach the end wondering if you missed something important.
The amount of 'taboo' subjects and crazy situations contained the book will make you cringe while trying to recommend it to your friends. It almost feels too personal to give any specific opinions about the book knowing that another person will have that in mind as they reached parts the evoke mixed and confusing emotional responses. All in all an excellent book but I wouldn't recommend it to my mom.
Read more
16 people found this helpful
Helpful
Report abuse

Steven R. Wallace
5.0 out of 5 stars Unusual structure, brilliant writing
Reviewed in the United States on October 11, 2020
Verified Purchase
This is a book I will be pulling off the shelf to read again. I was drawn in at first by the alluring title, then entranced by Kundera's unique narrative. His flights of fancy touch down in philosophy, music theory, history, autobiography, all swirling around the themes of laughter & forgetting.
Read more
One person found this helpful
Helpful
Report abuse

Seth Bouchelle
5.0 out of 5 stars Read this book. Buy it here.
Reviewed in the United States on January 2, 2015
Verified Purchase
One of the most beautiful books I've ever read. I had read Unbearable Lightness of Being and, while I liked it, wasn't sure that I'd recommend Kundera to anyone. This one changed my mind. The condition of the actual book was perfect and well priced. I had looked for it at a few book stores in NYC, but nobody had it around.
Read more
9 people found this helpful
Helpful
Report abuse

RBradbury451
4.0 out of 5 stars Depression and Remembering
Reviewed in the United States on November 6, 2005
Verified Purchase
Kundera could not write Laughter and Forgetting without discussing, at some length, their opposites. This overall sad "novel" has elements that are unforgettable. The novel was set in the backdrop of Prague Spring in 1968, when disaffected teachers, writers, and historians, believing that freedom from communism's bone-crushing anti-intellectualism was within reach, were seduced into tipping their hands, only to be crushed by the Russian invasion that followed in August. Tens of thousands emigrated, while hundreds of thousands were banished from their positions of power and influence. Many went to jail.

Similarities between Kundera's characters and my friends during the heady "flower power" days of the late 60's here in the USA made the novel ring sadly true and "universal" on a personal level. We were disaffected with the establishment, we felt empowered by our energy, ideals, and our sense of intellectual, political, and sexual freedom. But . . . things didn't turn out for us the way we had planned them. While the napalm was flowing in Vietnam, the tanks were rolling in Prague, and the National Guard was firing on the students at Kent state, the mistakes that affected us most severely were those that happened in our relationships with friends and lovers. It is quite true that the state will squash -"like a flea between its fingers"- the individual that steps out of its circle of preferred actors and thinkers. But it's not the state that we have to worry about. The bankruptcy in our lives is usually of our own making, a point which, despite it's railings against the establishment, The Book of Laughter and Forgetting eloquently makes.

While Kundera repeats the sins of the state several times, even opening two chapters with identical accounts of a man erased by the state, his characters fumble with sins of their own. The men, compelled to act out sexual and ego games, lead hollow lives. Ultimately, they must deal with an overwhelming sense of their own failure. The women characters do not fare much better. They get the little joy in life available to them only by forgetting the men they love.

Throughout the book, Kundera maintains that it is only by remembering that we can live and make progress. Kundera says we don't do this very well -- as nations or individuals. We try to re-write history - condemning ourselves to repetitive failure. Sound about right?

The book is as disturbing as it is wise. Laughter and Forgetting is a good introduction to the rich and complex work of Milos Kundera.
Read more
40 people found this helpful
Helpful
Report abuse

Ann Bradley
5.0 out of 5 stars Beautifully translated
Reviewed in the United States on November 13, 2013
Verified Purchase
My books are packed from a long-distance move or I would get this one out and check it - but as I recall, this book was translated twice. From the original language to French to English. I have read a number of translated books, and the translation can make or break the book. This book was so beautifully and poetically written I wondered if it read as well in its original language. I honestly don't remember any of the stories - what I recall was the poetic descriptions used.
Read more
3 people found this helpful
Helpful
Report abuse

Magesage
5.0 out of 5 stars You will laugh and it will help to forget
Reviewed in the United States on December 3, 2013
Verified Purchase
I fell in love with this book while I was on a study abroad trip in Prague. Kundera defined what is now my favorite non-English term in this novel. The book is layered with many stories that will certainly help you laugh and forget about all the narrative problems that intersect with our own real problems. This is the kind of book that one should read when the world seems to be at its worst. I ordered this copy for my brother who's a Philosophy major in undergrad at the moment, it could not be more relevant.
Read more
4 people found this helpful
Helpful
Report abuse

Beth
5.0 out of 5 stars Great book!
Reviewed in the United States on December 20, 2018
Verified Purchase
I love Milan Kundera's books, and this is another great book by him
Read more
Helpful
Report abuse
See all reviews

Amazon Customer
5.0 out of 5 stars Very satisfied
Reviewed in the United Kingdom on December 1, 2018
Verified Purchase
Great service. As it says used but good. I must admit, the book was used but very good
Read more
Report abuse

Big G
5.0 out of 5 stars Another masterpiece to devour
Reviewed in the United Kingdom on December 3, 2016
Verified Purchase
Amazing book by a brilliant author!
Read more
Report abuse

Amazon Customer
5.0 out of 5 stars condition of book
Reviewed in the United Kingdom on February 19, 2019
Verified Purchase
used for my book club
Read more
Report abuse

Isabela
4.0 out of 5 stars Four Stars
Reviewed in the United Kingdom on October 27, 2016
Verified Purchase
It is not as good as The Unbearable Lightness of Being and Immortality, but provides a pleasant reading.
Read more
Report abuse
See all reviews

See all deals
Page 1 of 1 Start overPage 1 of 1
Previous page
Next page
Pages with related products. See and discover other items: classic book, my big farm book
Back to top
Get to Know Us
Make Money with Us
Amazon Payment Products
Let Us Help You
EnglishChoose a language for shopping. United StatesChoose a country/region for shopping.
© 1996-2021, Amazon.com, Inc. or its affiliates