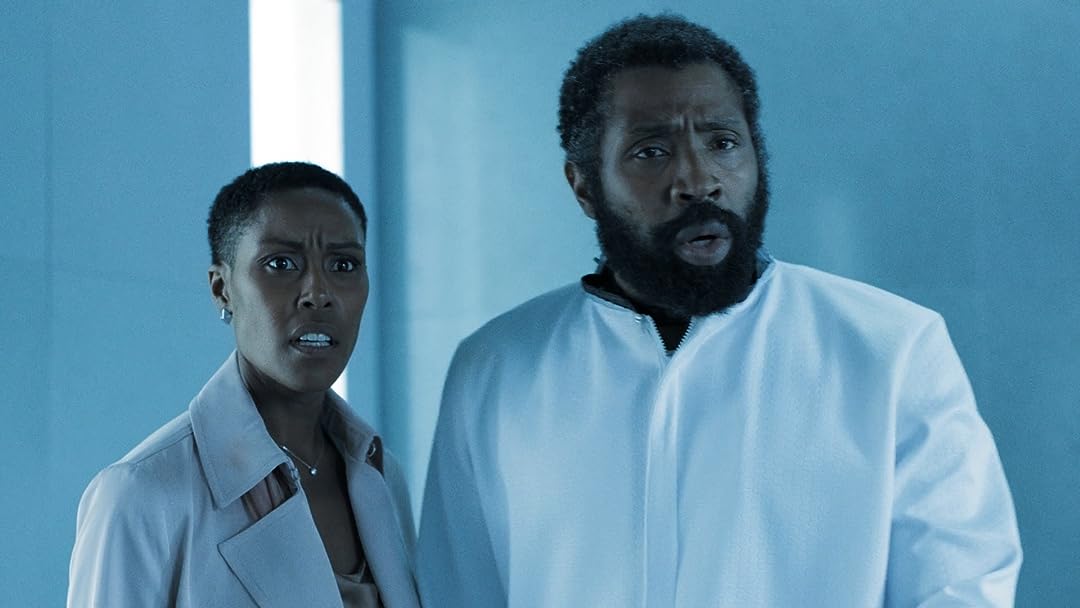 (147)2020NR
In Season 3, Freeland has been plagued by government-sponsored experiments and drug trafficking that have created metahumans, while making Freeland a target of a dangerous foreign power, Markovia. Fortunately, the super-powered Pierce family – Jefferson Pierce aka Black Lightning, and his daughters Anissa, aka Thunder, and Jennifer, whose body generates electricity – are up to the challenge.

H. BalaReviewed in the United States on October 3, 2020
4.0 out of 5 stars
still the most grown-up show in the Arrowverse
Verified purchase
If you were trying to come up with a tagline for this third season of BLACK LIGHTNING, consider "a house divided." And maybe some **plot spoilers** now. What makes this show so interesting to me are the ever-shifting family dynamics of the Pierces. But Season 3 opts to scatter the family. The ASA's insidious Agent Odell (Bill Duke) is keeping Jefferson and Dr. Lynn confined at some well-guarded facility to conduct meta-human experiments, leaving the Pierce kids rudderless in the tumultuous city of Freeland. Whatchu think Anissa was gonna do? The militant child proceeds to take on another vigilante persona in her fight for the cause. Her younger sister, Jennifer, starts making wrong choices left and right.

The first arc of this sixteen-episode season concerns the military occupation of Freeland, with the ASA (American Security Agency) serving as the hostile head of the snake. And if you were anticipating a deluge of social relevance with regards to how Freeland's mostly black community suffers under the ASA's thumb, that's here, too, and if you want specifics, I'll direct you to the episodes "Requiem for Tavon" and "Battle of Franklin Terrace." Fact is, the first few episodes exude a sense of palpable bleakness as the ASA exerts its stranglehold on Freeland, wresting control away from local authorities, controlling the media, and promoting its own warped propaganda. The ASA's public justification is national security. The ASA is allegedly in town to prevent a hostile foreign power, namely the Eastern-European nation of Markovia, from appropriating Freeland's wellspring of meta-humans. But, really, we all know what the ASA really wants to do is acquire and weaponize the meta-humans for its own shady purpose.

As always, heavy topics get addressed, subject matter that seem even more timely given the state of rampant unrest going down in our republic. This show has never shied away from embracing its cultural roots and tackling uncomfortable political issues. Factor in the grounded, on-point character work and I may fight you if you disagree that BLACK LIGHTNING, from the time it first aired, has been the most grown-up show in the Arrowverse.

I'm halfsies on this season. Can't give it full marks. Honestly, the Occupation arc was depressing and dispiriting. AND it split up the Pierce family, physically and ideologically. The first heap of episodes features an ineffectual Jefferson who went around moping and sulking and with no access to costume or powers. When he does recover costume and powers, he ends up tagging along with his daughter, Anissa, who had become a significant player in Freeland's underground resistance. See, while Jefferson was away being detained, she'd been protecting the city. I tell you Anissa is in even less of a mood to listen to her father's moralizing. Anyway, the Occupation arc unleashed several good moments, but I couldn't wait for the show to move on.

I perked up when the plot shifted the venue away from Freeland, as Black Lightning and his crew brought the fight to Markovia. And, more and more, it seems as if the show is laying groundwork for the Outsiders. Somewhere along the way, we run into Gravedigger, the season's biggest big bad. I was skeptical at first about Gravedigger, seeing as he's played by television personality Wayne Brady. But Mr. Whose Line Is It Anyway? wasn't messing around. He convinced me, man.

Unlike Tobias Whale, one can argue that Gravedigger is a sympathetic character. He's an interesting hombre whose origin story dates back to World War II. Fact is, he and Jefferson are two sides of the same coin, both holding it down for their respective communities. It's their philosophical approach that's at loggerheads, the Gravedigger's cynicism a counterpoint to Jefferson's optimism. But you see where Gravedigger's coming from, how his country and government did him wrong. And I have to believe there'd be those who would buy into his dream of a free society of metas within the Markovian borders. And then there's that, when it's time to throw hands, Gravedigger easily holds his own against a squad of Black Lightning and other metas.

If there's a villain more scary than Gravedigger, it's Agent Odell, and keep in mind he's no meta. But there's something unsettling about how Bill Duke plays Odell as so soft-spoken and yet so sinister. Agent Odell is basically Amanda Waller with a y chromosome.

Meanwhile, old Tobias Whale twiddles his thumbs for most of the season.

I have to 'fess up that Black Lightning isn't my most favorite character in the show. Those would be Jennifer a.k.a. Lightning and my favorite tailor spy, Gambi. Season 3 introduces new characters, my favorite being the technopathic kid. As far as character arcs go, Dr. Lynn and Khalil/Painkiller were served best. It sucks that Cress Williams morphs into a supporting character in his own show for a huge chunk of the season. He does snag a batch of strong dramatic scenes as Jefferson tries to salvage his crumbling relationship with his ex-wife.

The action is consistently good. In my opinion, this show's fight choreography is superior to the other shows currently in the Arrowverse. Why is it I get more of a kick from watching Thunder and Lightning and even Painkiller in action more so than from watching Black Lightning in action?

I keep jamming to the funky soundtrack.

If you're looking for the episode that ties into the Crisis crossover, it's episode nine.

R. FaithReviewed in the United States on February 3, 2020
5.0 out of 5 stars
Most mature of CW DC shows.
Verified purchase
I really enjoy this show the family and community of Freeland is a interesting setting. I’m excited to see where it goes post Crisis.
2 people found this helpful

JulieReviewed in the United States on April 8, 2021
5.0 out of 5 stars
Fantastic!
Verified purchase
Fantastic!

Patricia BrunsonReviewed in the United States on February 18, 2020
5.0 out of 5 stars
I enjoyed this movie tremendously.
Verified purchase
Excellent

Amazon CustomerReviewed in the United States on February 29, 2020
1.0 out of 5 stars
Refund please
Verified purchase
I did not order this. This must have been ordered by accident. Please take off and credit.

Jermekia LawrenceReviewed in the United States on December 12, 2019
5.0 out of 5 stars
Love it
Verified purchase
Absolutely Love it

Gregory McMahanReviewed in the United States on October 9, 2019
5.0 out of 5 stars
The Beginning Of An Awesome Story Arc
Season Three starts off well. Our hero is locked down, and The Man is trying desperately to convince his smart, sexy wife that she is in peril, and that the only way the that the two of them can survive is to cooperate with The Establishment and their master plan for the metas of Freeland. Freeland itself has been turned into a police state, and Thunder, now a hardcore vigilante, is working with Uncle Gambi to destabilize and undermine the plans of The Man.

There are some excellent historical and cultural riffs, as well as some naked commentary on current events. Production values are high, which is good, and the soundtracks are slammin' as always. Plus, my personal favorite: a--kickings and beat-downs aplenty, with equal opportunity for all.

I enjoyed the first episode while watching dinner. I signed up for the entire season, and can't wait to watch my favorite crime-fighting family stick it to The Man. Get your popcorn, candy and favorite drink ready, 'cause this is going to be a fun ride!
5 people found this helpful

makadoblack1101Reviewed in the United States on March 11, 2020
5.0 out of 5 stars
Worth Every Penny
I bought this season because I can't find it on Hulu or Netflix. I met Baron when I was around town. He was AWESOME!!!! He told me his was debuting Season 3 Episode 8. I can't stop watching. This is right there with GOTHAM which I missss sooo much and Flash. Man I love this because hey this is the first AA superhero thats POSITVE and has a wife and kids and is addressing subjects that need light in real life. BRAVO!!! keep em comin. Thanks for entertaining me in this Movie and TV environment offering horrible list of options 98% of the time that we have to watch everyday.
2 people found this helpful
See all reviews
Back to top
Get to Know Us
Make Money with Us
Amazon Payment Products
Let Us Help You
EnglishChoose a language for shopping. United StatesChoose a country/region for shopping.
© 1996-2021, Amazon.com, Inc. or its affiliates