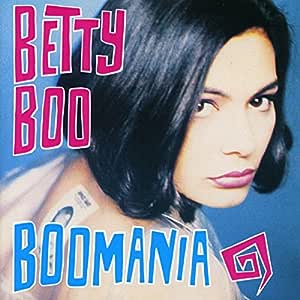 Betty Boo Format: Audio CD
4.6 out of 5 stars 47 ratings
See all 15 formats and editions Hide other formats and editions
Includes FREE MP3 version of this album.&nbspProvided by Amazon Digital Services LLC. Terms and Conditions. Does not apply to gift orders.&nbspComplete your purchase to save the MP3 version to your music library.
Available at a lower price from other sellers that may not offer free Prime shipping.

Digitally remastered and expanded two CD deluxe edition of the classic 1990 album - Boomania. This edition includes the 12 original album tracks plus 14 related bonus tracks. Betty Boo's original breakthrough came with the release of 'Hey DJ / I Can't Dance (To That Music You're Playing) as The Beatmasters featuring Betty Boo on Rhythm King in 1989. Her debut album Boomania followed in 1990 peaking at #4 in the UK album charts and achieved platinum status of 300,000 sales. In 1991 Betty Boo won a Brit Award for British Breakthrough Act. Boomania is packed full of pop gems in Boo's unique style, providing four UK hit singles.

Paul Bautista
5.0 out of 5 stars Five Stars
Reviewed in the United States on May 30, 2018
Verified Purchase
Got it as a gift for my girlfriend.
Read more
Helpful
Report abuse

Robert Sanchez
2.0 out of 5 stars Nice that they've added many remixes
Reviewed in the United States on January 8, 2017
Nice that they've added many remixes, but to not include the Shep Pettibone "Damned If You Do" remix of "Doin' the Do" is a mistake. That remix is the one that got played in the clubs, and is the only reason "Doin' the Do" became a #1 hit on the Hot Dance Club Play chart. To go so far as to include an instrumental remix of "24 Hours" and not include the "Damned If You Do" remix was a bad move.
Read more
One person found this helpful
Helpful
Report abuse

heather
3.0 out of 5 stars woohoo! go back to the early 90s.
Reviewed in the United States on January 13, 2004
Wow, what more can i say other than this album sure brought me back to being 7 years old! But I will say that the album does have it's good moments for reflective sounds *Valentine's Day* it's a good song yo!
Read more
2 people found this helpful
Helpful
Report abuse

mark richardson
4.0 out of 5 stars Where are you Betty Boo?
Reviewed in the United Kingdom on December 9, 2016
Verified Purchase
I sold Betty Boo’s debut album with an assortment of other CDs, then began to regret it. I just had to order another copy, this time purchasing a US Import on the Sire Label, with no bonus tracks. This CD has natural ‘lo-fi’ sound, so there are no issues about loudness. The 7” Radio Mix of the single ‘Doin’ the Do’ sounds louder than the other tracks though.

Back in 1990, with her image based on a cartoon character called ‘Betty Boop’ I initially dismissed Betty Boo as ‘just another female rapper’, along with other acts such as Nenah Cherry and ‘Salt ‘n’ Peppa’. When the second long-player ‘Grrr its Betty Boo’ arrived in 1992, I realised that Boo was a ‘cut above the rest’, co-producing her own music in the studio after completing a course in Sound Technology. This was a period when sampling sounds from other records was in vogue.

‘Boomania’ (48:29) features the singles ‘Hey DY/I Can’t Dance’, the wonderful ‘Where are you Baby’ and a weaker fourth single ’24 Hours’. It is not ALL rapping; ‘Boo’s Boogie’ is an instrumental, and ‘Valentine’s Day’ has an atmospheric backing with singing. The title ‘Boo is Booming’ has a familiar-sounding sample which I suspect is taken from the hit ‘Montego Bay’. Towards the end there are some duller tracks, like ‘Mumbo Jumbo’ and the repetitive groove of ‘Shame’ (5:04).

Although I prefer Betty Boo’s SECOND album to ‘Boomania’, this was still a promising debut. When Betty Boo’s chart positions started falling in 1992, it appears that she was dropped by the major label WEA, which seems disappointing and short-sighted given the quality of her two albums. I read that Madonna wanted to sign her to her own ‘Maverick’ label, but nothing came of it for some reason. Betty Boo later appeared on the ITV show ‘Loose Women’, and said there was a forthcoming new album, but as far as I know it never appeared.

Nicola
5.0 out of 5 stars GREAT
Reviewed in the United Kingdom on September 30, 2016
Verified Purchase
Great CD. A bit different from the norm. Pop and dance with some jazz undertones. I am very pleased with this purchase and would buy again.
Read more
Report abuse

Mr. L. A. Morfitt
5.0 out of 5 stars Betty Boo
Reviewed in the United Kingdom on July 1, 2013
Verified Purchase
Totally OUTSTANDING.
I absolutely love this album. Betty Boo has a great deal of musical talent. Her style is utterly class and superb!!.
I definitely rate this very highly to any Dance/House music fan.
BRILLIANT!!!.