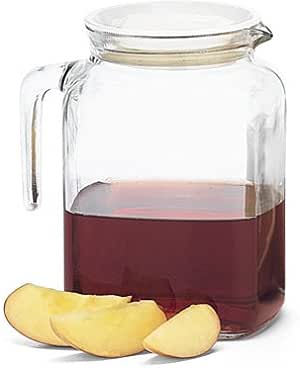 Visit the Bormioli Rocco Store
4.1 out of 5 stars 447 ratings
Currently unavailable.
We don't know when or if this item will be back in stock.

Serve and store your favorite beverages with this Frigoverre pitcher from Bormioli Rocco. Made of sturdy glass, this jug features a BPA-free hermetically sealed lid with a white finish. With an easy-pour spout and side handle for effortless serving, it has a classic design that will complement any tabletop. Even better, it is dishwasher safe for easy cleaning.

4.1 out of 5 stars
4.1 out of 5
447 global ratings
How are ratings calculated?
To calculate the overall star rating and percentage breakdown by star, we don’t use a simple average. Instead, our system considers things like how recent a review is and if the reviewer bought the item on Amazon. It also analyzes reviews to verify trustworthiness.

VA
3.0 out of 5 stars Good product, but false sizing information
Reviewed in the United States on June 5, 2017
Verified Purchase
First, I'd like to say that I really like the product, but... I already had one of these 68 oz pitchers I bought for around $13 and like it a lot, but wanted a larger size. This product says 77 3/4 oz and is twice the price, but purchased anyway. Received it and it is identical to my other glass pitcher and is only 68 oz...for twice the price and had to wait longer for delivery for the "larger" size. Just be aware when buying that it is not 77 3/4, but is 68 oz and there are better prices available for the 68 oz advertised size. It's a good product, just a bad description and pricing.
Read more
16 people found this helpful
Helpful
Comment Report abuse

danakscully64
5.0 out of 5 stars I love it, buying a 2nd one today!
Reviewed in the United States on September 3, 2015
Verified Purchase
I love this product so much that I'm buying another one right now. I needed a non-plastic pitcher to keep cold coffee in the fridge. I checked Amazon and this one was highly recommended. I love that the opening on top is big enough to reach a hand in to wash. I have another tall and narrow glass pitcher I'm using for iced tea now and it's completely stained because I can't reach the middle or bottom with a sponge (that's what the new pitcher will be used for). I got a hang of the seal right away, it's really easy to figure out. 5 stars, love it. Very sturdy, great price for the quality.
Read more

Saga
4.0 out of 5 stars Comparisons with smaller size Frigoverre & different lid of the Gelo
Reviewed in the United States on February 27, 2015
Verified Purchase
This is a very nice, thick glass pitcher that feels very solid. To seal it, you place the lid on top, then twist the middle portion within the top of the lid. I do recommend you leave an inch or two from the top to pour it properly – if I don’t give it that leeway, I end up with liquid on my counter. I purchased three different Bormioli Rocco items at the same time; this one, the “Bormioli Rocco Frigoverre Jug with Hermetic Lid, 1 Liter” and the "Bormioli Rocco Gelo Jug with White Lid, 41-Ounce" Here’s some comparisons that might help others.
In comparison with the 1-Liter Bormioli Rocco Frigoverre Pitcher
I had expected them to be the same height, but the 68 oz version is roughly two inches shorter than the 1-liter. Instead, the extra volume is realized by increasing both the width & breadth by about two inches each. The opening at the top is about an inch wider. This one has the same style hermetic lid as the smaller Frigoverre, just with a larger diameter.
Because it is so stout the center of gravity is low and if you were to push it at the very top, it would be more likely to slide than to fall over.
The 68 oz is a better choice if you have less height in your shelf but the tradeoff is for crowded shelves it has a wider footprint. I'd rather have two of the taller 1-liter sizes on my top shelf because I get more height for about the same footprint and I can arrange that same footprint more flexiblly.
While I haven’t done it, you could use this to store thicker liquids or even something like a chunky soup because the opening is wide enough for a serving spoon or your hand. (But as other reviewers have noted, you wouldn’t want to introduce large temperature differences as it isn’t tempered glass.)
When full, the 68 oz tends to be heavy enough you really need both hands to use it comfortably.
In comparison with the Bormioli Rocco Gelo Jug with White Lid, 41-Ounce
I'm not sure why the Gelo is listed as 41 oz and the 1 Liter Hermetic claims 39 oz because the glass portion appear to be identical in size and shape. The spouts are identical. The only difference is the Gelo has raised decorative lines and the other does not. Therefore, the size considerations and trade-offs are identical between the Gelo and the Frigoverre of the same size relative to the 68-oz.
The lids are where the differences lie - the Gelo lid pops on and off very easily and twists to create a gap. (but I suggest you remove it rather than twist because the opening is not large enough for it to pour properly, so you get a mess if you use it.)
The hermetic lid has to be removed completely to pour at all. To seal it, you place the lid on top, then twist the middle portion within the top of the lid to seal it. That lid does provide a very nice tight seal.
The Gelo is easier & quicker to use. The Frigoverre’s hermetic lid is preferred where a strong seal is wanted.

R. KnowltonTop Contributor: Camping
4.0 out of 5 stars Excellent for Fresh Brewed Iced Tea
Reviewed in the United States on November 27, 2015
Verified Purchase
I purchased this to make fresh brewed iced tea in the microwave. I'm pleased with it.

Pros:
- Sturdy, thick glass.
- No nasty plastic taste in the beverage.
- The handle is sturdy, and for my normal man-hands, there's enough space for me to get a good grip.
- The lid seals very tightly. With the lid on correctly, I can shake it horizontally to mix beverage ingredients.
- The silicon o-ring can easily be removed for cleaning.
- Accepts the  FORLIFE Capsule Infuser  with no problem.
- Thus far, will heat up to boiling in the microwave with no thermal shock issues.
- The shorter height fits mo' betta in my refrigerator.

Cons:
- It's heavy.
- Since the lid seals completely, I have to loosen or remove the lid in order to pour.
Read more
7 people found this helpful
Helpful
Comment Report abuse

Ally
5.0 out of 5 stars Perfect size for 2 quarts of iced tea
Reviewed in the United States on September 6, 2015
Verified Purchase
This pitcher is perfect for holding 2 quarts of iced tea. Since it's not truly heat sensitive glass, I first steep the tea with boiling water in a Pyrex measuring cup, then when cool add the tea concentrate and cold water to the pitcher. The seal of the lid is tight enough to shake it up good! Some people have complained about the lid being difficult to use or leaky. Neither is true! They just don't know how to use it. You need to put the lid on and hold the outer edge while turning the knob in the center clockwise until it's as tight as you can make it. That will push the gasket up creating a good seal. To open, hold the outer edge of the lid and turn the knob counter clockwise to loosen the gasket and remove the lid. No, you cannot pour with the lid on. I am trying to eliminate the plastic I use and have all three sizes of this pitcher!
Read more
4 people found this helpful
Helpful
Comment Report abuse

gm713
5.0 out of 5 stars I love this pitcher
Reviewed in the United States on April 19, 2019
Verified Purchase
I've had this pitcher for four years and it still seals and works like it first did. I use it everyday and bring it with me from home to where I work. It's nice to stay hydrated with filtered water from home all day. I love that it is glass, and so is the water bottle I use. I only have used it for cold beverages and room temperature water.

It's such a great feeling knowing that your drinking water is in non-reactive glass containers. The lid seals well when you close it very tight, but it can also be hard to loosen when you want to open it. If you tighten it medium strength you will still get a leak proof seal but I wouldn't recommend laying it down or turning it upside down without using some proper strength to twist the lid first.
Read more
Helpful
Comment Report abuse
See all reviews

Amazon Customer
5.0 out of 5 stars A class glass jug !!
Reviewed in Canada on May 14, 2017
Verified Purchase
This Jug pours nicely, no drips.
Read more
Report abuse

es
5.0 out of 5 stars Five Stars
Reviewed in Canada on January 12, 2017
Verified Purchase
Good jar, wife is happy with it, she said that probably will need another one.
Read more
Report abuse
See all reviews

Page 1 of 1 Start overPage 1 of 1
This shopping feature will continue to load items when the Enter key is pressed. In order to navigate out of this carousel please use your heading shortcut key to navigate to the next or previous heading.
Back
Next
Pages with related products. See and discover other items: glass milk bottle, glass picture, milk jug, sun tea, sangria pitcher, beverage pitcher