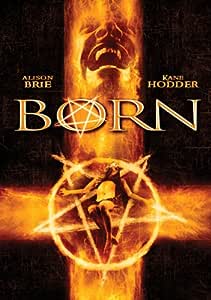 Mary Elizabeth goes to bed alone one night, still a twenty-one-year-old virgin, and wakes up the next morning...pregnant. Possessed by the demon fetus growing within her womb, Mary Elizabeth obeys her homicidal cravings to kill...for the sake of her unborn spawn. Mary Elizabeths dark transformation is controlled by her unborn demon childs deadly evil cravings. Once the child is born, there will be hell on earth. From this apparent immaculate conception comes edge-of-your-seat terror.

PR GUY
2.0 out of 5 stars The Exorcist vs. Rosemary's Baby and the Hunchback of Notre Dame
Reviewed in the United States on March 25, 2014
Verified Purchase
I didn't like it. It was a coagulation (no pun intended) of many bloodlines and an insult to horror fans. Nothing creative about it. Its several twice told tales merged into one huge mess. Lots of blood, sex, nudity and...and...and...nothing else. What a silly looking baby devil monster. They used to give away more realistic plastic toys in Cracker Jack boxes. The entertainment value lays in the films ability for the viewer to hang loose for better scenes...but this thrill-less ride only takes you into a downhill spiral. I gave it 2 stars because I actually finished watching it (not that I was tempted several times to abort the baby along with the film). This is one film that should never have been "Born".
Read more
Helpful
Report abuse

DanaeJade
4.0 out of 5 stars An Entertaining Hellride
Reviewed in the United States on May 27, 2012
Verified Purchase
Mary Elisabeth (Allison Brie) is having a very bad day. It starts off with her mother's graveside funeral service followed by a freaky hallucination and ends with her being pregnant the next morning. The weird thing is that she's already has a prominent baby bump and is having the worst morning sickness ever. Oh, and did I mention that she's a virgin? And the proud papa happens to be the Demon Asmodeus (Kane Hodder), who, when he was human, happened to be her brother. (Eww!) It seems that Asmodeus has brokered a deal with Ol' Scratch. This incestuous encounter is supposed to make him human again while his chip off the old block wrecks havoc on Earth and then take his place in hell. And you think your family has problems!

I have heard that this movie stinks, but I have to be honest, I enjoyed it. First of all, it's Kane Hodder! Without the makeup! And with decent lines! And way more than just a few scenes! If any of you have doubts that he can act, throw them away. I knew he had it in him, but the few times I had seen him not as Jason Vorhees from the last four Friday The 13th movies, he's been underused. Which is probably for the best, 'cause the movies (Dead Noon, Dark Wolf) were awful. But not only did he do well, so did the rest of cast. The gore effects are well done and the cgi demon baby is cheese-tastic! Not only that, but when Miss Brie character is possessed by her fetus, she is over the top hilarious. ("Baby be born! Baby be born!" ranks up there with "Jumby wants to be born."( "Unborn") ).
Read more
One person found this helpful
Helpful
Report abuse

Lou Williams
4.0 out of 5 stars Fun but silly horror flick
Reviewed in the United States on September 1, 2018
Verified Purchase
Fun movie- great to see Alison Brie in one of her first roles. She really let's it all hang out there, if when the script and dialog gets silly
Read more
Helpful
Report abuse

James T. Collins
1.0 out of 5 stars One Star
Reviewed in the United States on May 20, 2017
Verified Purchase
I like Alison Brie but this was not a movie she could save, sorry Alison
Read more
Helpful
Report abuse

Cass W.
3.0 out of 5 stars It's bad, but only sort of in the fun way?
Reviewed in the United States on March 26, 2014
Verified Purchase
Purchased this movie because I thought it would be funny to see Alison Brie's debut role as a possessed pregnant chick and expecting the movie to be the fun kind of campy and bad. It was pretty bad, but not super fun.
Read more
Helpful
Report abuse

Sean Johnson
3.0 out of 5 stars Three Stars
Reviewed in the United States on April 29, 2016
Verified Purchase
For a low-budget movie, it was alright. Nothing much else to say about it.
Read more
Helpful
Report abuse

G. Fernandes
1.0 out of 5 stars Meh!
Reviewed in the United States on November 7, 2010
Verified Purchase
Bought it to see Alisons chest. Its a stunt chest. She deserves a better movie. threw it in the trash. Probably kool for cheesy horror fans.
Read more
One person found this helpful
Helpful
Report abuse
See all reviews

Death to spurs
2.0 out of 5 stars Abortion
Reviewed in the United Kingdom on January 2, 2015
Verified Purchase
This is a confused and jumbled farrago which has borrowed heavily from far superior films (ie Rosemary's Baby).
The plot has been outlined before, so suffice to say there are cheesy lines and cheesier acting, Joan Severance paying her electric bill, kane Hodder out of his depth, naked twins who wander round for no discernible reason other than to provide eye candy, a hysterical performance from Ms Brie ,an ugly bald guy wearing white face-paint and an emissary from the church with a pistol;.
The scenes where Ms Brie has to present an inner conflict, voicing a struggle between herself and her demon baby are truly awful and hilarious.
If you have to watch every single Satanic horror pastiche, give it a go. I just think you'll be regretting the decision as the credits roll.
Read more
Report abuse
See all reviews