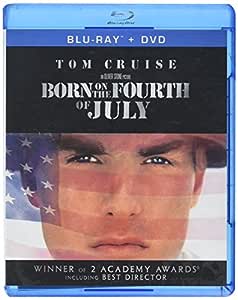 Born on the Fourth of July [Blu-ray]

Tom Cruise delivers a riveting and unforgettable portrayal of Vietnam veteran Ron Kovic in Oliver Stone's Academy Award-winning masterpiece Born on the Fourth of July. Based on a true story, the acclaimed film follows Kovic from a zealous teen who eagerly volunteered for the Vietnam War, to an embittered veteran paralyzed from the mid-chest down. Deeply in love with his country, Kovic returned to an environment vastly different from the one he left, and struggled before emerging as a brave new voice for the disenchanted.

4.6 out of 5 stars
4.6 out of 5
779 global ratings
How are ratings calculated?
To calculate the overall star rating and percentage breakdown by star, we don’t use a simple average. Instead, our system considers things like how recent a review is and if the reviewer bought the item on Amazon. It also analyzes reviews to verify trustworthiness.
Top reviews

Amazon Customer
5.0 out of 5 stars Excellent replication.
Reviewed in the United States on October 14, 2016
Verified Purchase
I'm an anti-war Vietnam vet, went through the Tet Offensive and a conversion experience from stupid patriot to well informed American. This movie is very well done, acting and the roles people played back then are replicatious, I highly recommend this movie because it's
a more comprehensive viewpoint of the time and the war. There never has been an American war in which so many soldiers and veterans refused to support it. One point of view says Nixon had to end the ground war because his troops flat-out were refusing duty by the whole unit. This movie demonstrates the frustration of coming home injured from a war everyone hated; what a drag. Ron Kovic's story is on-going and he recently got married and seems like a very happy man who conquered his disability. I love this movie. Watch it. Then read the book.

Stella CarrierTop Contributor: Writing
TOP 1000 REVIEWER
5.0 out of 5 stars Touches On Some Topics Still Relevant and/or Essential Today
Reviewed in the United States on June 6, 2020
Verified Purchase
I admit that I must credit getting the idea to see this film Born On The Fourth of July less than 10 hours ago when I was going through some of my books in my apartment and I saw this film referenced in the book Wild Thymes by Sally Van Slyke. Born On The Fourth stars Tom Cruise in the role of Ron Kovic. This film is a who’s who of multiple actors/actresses playing the roles of the characters who indirectly andor directly influenced Ron Kovic’s life. This film touches on multiple sensitive scenes/issues that include: healthcare, events surrounding women and children, how the dynamics of a person’s life is seen through the lens of the person’s parents, friends, other professionals, protests etc. It is tempting to say more involving the plot points though I prefer to take into account others viewing this who still want to view Born On The Fourth of July.
Read more
2 people found this helpful
Helpful
Comment Report abuse

Michael L. Wolff
5.0 out of 5 stars Masterpiece--a powerful and gripping tribute to the veterans of Vietnam and their agony.
Reviewed in the United States on August 10, 2014
Verified Purchase
I read the book before seeing the movie. Based on a true story, the movie captures the essence of the book. A very fallible, but talented young man is influenced by the events of his time and does what most of us would consider the right thing by signing up to serve his country. Unfortunately, what he was told and the "ground truth" turn out to be two different things and his ideals are shattered by a series of agonizing events that leave his body and psyche ruined and almost hopelessly broken. The homecoming scene is possibly my all time favorite movie scene. Difficult and painful to watch, it is a scene that was repeated in thousands of households across the country in the late 60s and early 70s as thousands of traumatized GIs returned home to a nation that had somehow changed, grown, a nation in confusion, a nation of shattered ideals, less innocent. The homecoming scene captures every aspect of this new, alien world, from the confused, sympathetic looks of the neighbors to the new clothing styles, new hair cuts. The country was experiencing Woodstock and Altamount, Watergate, the moon landing, Charles Manson, the fall of Saigon, protesters burning flags. America had changed and Kovac must find his place in this new, foreign, less idealistic world. Incredibly, Kovac triumphs against all odds, growing stronger, deeper from a prolonged agony that most of us can't even begin to fathom. His spirit triumphs over his devastated body to become an elected politician. His amazing transformation is completed in the final scene as he goes from an innocent young boy to a wheel-chaired politician speaking to millions of people. Truly one of the greatest movies ever made.
Read more
13 people found this helpful
Helpful
Comment Report abuse

Susan M.
5.0 out of 5 stars Up close and personal Vietnam War story
Reviewed in the United States on July 19, 2014
Verified Purchase
Great story and acting. Cruise won many accolades for his role as Ron Kovic, and they were well-deserved. Cruise is a dynamo and a heartbreaker here. His enthusiasm and patriotism as an all-American boy from Long Island growing up in a can-do and win-at-all-costs sports and military culture is endearing, and when his bewilderment and growing anger at the mistreatment and disrespect he receives from American public on his return as a parapalegic veteran erupts in brawling rage we want to cheer him on. The movie, directed masterfully by Oliver Stone, himself a Vietnam vet, brings us back to that time when "the music died" and the American dream split in two. Kovic finally achieves success as an activist fighting for soldiers and veterans rights, ironically fulfilling his mother's earlier prophecy, while the family watches JFK give his famous "Ask not what your country can do for you" speech on television, that "I can see you Ronnie, speaking before a lot of people, saying important things, just like him..."
Read more
9 people found this helpful
Helpful
Comment Report abuse

Kyaruzi
5.0 out of 5 stars Tragedy for a Born Patriot
Reviewed in the United States on September 28, 2015
Verified Purchase
This film struggles when it comes to keeping your interest constantly, but it stings to watch. Everything goes wrong and it all starts when a young boy wants to go fight for his country in a violent and disgusting war in Vietnam. Tom Cruise gives his best performance, often making one think about how all of this could happen and how hurtful it is to not be treated like one deserves. He comes right back after killing innocent people as they all did and suffers even more, trying to live a normal life as a cripple. It gets worse and worse as the film goes on, like Ron getting attacked at a Republican convention for trying to protest war in vietnam and also not being able to have sex with a prostitute. I might never watch it again, but if you start to watch, you will not be disappointed by this tragedy. Also, the ending is very anti-climatic as much as "W." was.
Read more
3 people found this helpful
Helpful
Comment Report abuse

Capt. Crusoe
5.0 out of 5 stars Brought Me Back
Reviewed in the United States on September 1, 2020
Verified Purchase
This movie is well done, a little over done in some areas and regardless of today's critics - Brought me back to a time I rarely talk or try not thinking about. A tough time for our nation and a tougher time for us vets. All of us gave some but some gave all - may we never forget. Not a movie for the faint of heart - God Bless America.
Read more
Helpful
Comment Report abuse
See all reviews

LyndyLousUK
5.0 out of 5 stars GREAT CLASSIC MOVIE!
Reviewed in the United Kingdom on July 1, 2017
Verified Purchase
Strictly speaking, I'm not a fan of Tom Cruise (I hate his Scientology connections....) BUT this is a GREAT, classic movie. An insight into how it was for our soldiers during the Vietnam War and what they had to contend with when they returned. I'd recommend this to anyone!
Read more
5 people found this helpful
Report abuse

CazJaz
5.0 out of 5 stars The brilliant Born on the 4th of July.
Reviewed in the United Kingdom on February 2, 2017
Verified Purchase
Tom Cruise is brilliant as the legendary Ron Kovic. Superb cast and crew throughout. Briefly showing his life before being posted to Vietnam then cut short by critical injuries the next year followed by a struggling recovery at the grim Bronx veterans hospital. Finding very difficult to re-ajust back to home life in a wheelchair he takes time out in Mexico and returns to front demonstration's during the Nixon period along with his former war colleagues. A powerful and heart moving film. To watch time again and again. Just need to read Kovics book now.
Read more
4 people found this helpful
Report abuse

zhou
5.0 out of 5 stars Tom Cruise great actor
Reviewed in the United Kingdom on June 15, 2019
Verified Purchase
To me Tom is the biggest movie star in the world and it is no surprise to me that when a role calls for acting he can always deliver. In fact he and Ron have something in common：never give up and strive for the best at what they do. Bottom line is Tom can be a great actor when he wants to be. But I am not a fan of the movie I think it too political.
Read more

Butterfly
5.0 out of 5 stars Vietnam. War plus effect on the participents
Reviewed in the United Kingdom on February 15, 2019
Verified Purchase
Fantastic war movie. Even more impressive is the after effects of the war upon those who participated.
Read more
Report abuse
See all reviews
Pages with related products. See and discover other items: new release blu rays