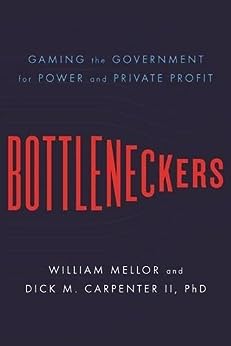 William H. (Chip) Mellor serves as chairman and founding general counsel of the Institute for Justice. He cofounded IJ in 1991 and served as president and general counsel until 2015. He has litigated cutting-edge constitutional cases, notably achieving the first federal appellate court victory for economic liberty under the Fourteenth Amendment since the New Deal. While Mellor was president, IJ litigated five US Supreme Court cases, winning four.

Under Mellor’s leadership, IJ has grown from a five-person start-up into a law firm with a nearly hundred-member staff, including over forty attorneys and an annual budget of $20 million.

Dick Carpenter is a director of strategic research at the Institute for Justice and a professor at the University of Colorado Colorado Springs.

Douglas Goldstein
5.0 out of 5 stars How much does government regulation crush the potential of people?
Reviewed in the United States on March 15, 2019
Verified Purchase
If you want to be blown away by an exposé of how the government can stop people from working, achieving their dreams, hiring others, and improving the economy, race out and read Mellor and Carpenter’s “Bottleneckers.” From local to state to Federal Government rules, it can be nearly impossible to get started as an entrepreneur.
I got interested in the book when I heard John Stossel interview the author. I was shocked by what I heard and I wanted to see if the claims could be substantiated. Luckily, “Bottleneckers” is packed with stories and their associated footnotes so that the academically inclined reader can confirm the veracity of the author’s claims.
In the book, Mellor and Carpenter go through a serious of professions wherein the embedded players work with the government to lock out new players or to grab money from the entrepreneurs who just want to earn an honest living with their own two hands. They analyze industries including funeral homes, taxis, interior design, food trucks, hair braiders, and more. Each chapter tells stories of real people who have had to fight heroically, not always succeeding, just to work. It reminded me of a real-life story of a good friend of mine who could not pursue her dream of helping people laugh. As a humorist, she had the uncanny ability to talk to people, help them dig deep into their souls to find their passions and fears, and then find the funny. By talking with her, a person could uncork his frustration through the use of joke-telling in order to be happier himself. I suggested that she become a humor therapist. “I couldn’t do that,” she explained, “because I’m not a licensed therapist.” Really? By talking with someone and making him laugh at the foibles in his life, does she really need government oversight? As the authors of “Bottleneckers” point out, there will always be people who can imagine how much damage therapists could do and then explain why the government needs to regulate them: “What if a suicidal person approaches the therapist and she just laughs at him?” Come on, bottleneckers, let’s FIRST find some evidence that unlicensed therapists are really doing some harm. And then top that off with evidence that licensed therapists stop all the suicides, and then we can talk about how important government regulation is. But until that point, let millions or consumers decide for themselves whether they want to talk with someone who can put a smile on their face. Sadly, my friend doesn’t have the financial means to start suing the government to allow her to practice as a humor therapist, and she doesn’t have the money or desire to go to medical school to become a psychiatrist, so she’ll continue along her current path of not being a humor therapist. It’s such a tragic loss for the hundreds of people who she would probably be able to help during her career if she were just free to work.

Jennifer
5.0 out of 5 stars I cannot recommend this book enough
Reviewed in the United States on January 5, 2018
Verified Purchase
I cannot recommend this book enough. This is the story of the painful, life-destroying results of occupational restrictions that predominately affect people struggling to get by and crush their dreams of independence. It has a really clear style, with personal, immediate stories and statistics.

People who aren't free to make a living, aren't free. It's time to arm ourselves with these facts and fight back against the intrusive government regulations that only exist to protect entrenched interests from competition.

erik noel batlle
3.0 out of 5 stars This book is not a historical accounting of bottlenecking.
Reviewed in the United States on December 23, 2017
Verified Purchase
The book mostly details specific cases of bottlenecking by following a few people represented in a few different industries. I had assumed the book would cover more the historical aspect of bottlenecking. It does provide some brief information about certain laws, probably the most expansive being in the first chapter about the 3 tier system used in the liquor industry. The rest of the chapters become very redundant, and there is too much time spent on giving some background about the people used as examples of the effects of bottlenecking. In short, this book read more like a series of articles in a newspaper rather then a coherent and comprehensive academic book on the subject, or historical accounting.
Read more
4 people found this helpful
Helpful
Report abuse

Dave Pechan
5.0 out of 5 stars America in economic decline
Reviewed in the United States on June 17, 2017
Verified Purchase
Commentary on the sad state of free enterprise in a declining capitalist state.
Read more
5 people found this helpful
Helpful
Report abuse

Jim Dunlap
2.0 out of 5 stars Table of Contents don't work. No Endnotes.
Reviewed in the United States on June 6, 2017
Verified Purchase
Links in Table of Contents don't work. No Endnotes. So that destroys a good bit of the value of the book. Needs to be fixed. Once fixed, I would give the book four stars. Citations are often week. No citations to specific state statutes. Just citations to other works. This is insufficient in my opinion.
Read more
8 people found this helpful
Helpful
Report abuse

Jake Gohl
2.0 out of 5 stars Two Stars
Reviewed in the United States on September 26, 2017
Verified Purchase
The examples are good, but the writing is quite poor and very repetitive.
Read more
One person found this helpful
Helpful
Report abuse
See all reviews
Back to top
Get to Know Us
Make Money with Us
Amazon Payment Products
Let Us Help You
EnglishChoose a language for shopping. United StatesChoose a country/region for shopping.
© 1996-2021, Amazon.com, Inc. or its affiliates