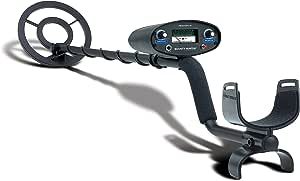 Brand: Bounty Hunter
4.4 out of 5 stars 5,302 ratings
Amazon's Choice recommends highly rated and well-priced products.
Amazon's Choice for "metal detector"
Available at a lower price from other sellers that may not offer free Prime shipping.

Buy this product as Renewed and save $16.59 off the current New price.

Made In the USA

Detects the presence of all metals to include gold, silver, brass, aluminum, iron and steel.

Warranty does not cover misuse of product.

4.4 out of 5 stars
4.4 out of 5
5,302 global ratings
How are ratings calculated?
To calculate the overall star rating and percentage breakdown by star, we don’t use a simple average. Instead, our system considers things like how recent a review is and if the reviewer bought the item on Amazon. It also analyzes reviews to verify trustworthiness.

Web Puddin
5.0 out of 5 stars Found my survey markers! Paid for itself in less than 2 hours.
Reviewed in the United States on November 7, 2017
Style: Metal DetectorVerified Purchase
I'm pretty impressed with this thing. I bought it for one purpose, so can only speak to that. When we established our property to build our house in a rural area, we had to have water lines and cable lines threaded through some trees. That was between 6 & 10 years ago. When we did it, I was forward thinking (I thought) and marked the lines with Survey Marking Whiskers.
But over time, dirt, grass, leaves, mulch, and pine straw buried them, and any that were not buried suffered from the ultraviolet sunlight making the plastic tops of the whiskers brittle, and thus the tops disintegrated. Gradually, I found, I could no longer tell where my lines were. Today - after one or two little practice sessions, I went out with the Bounty Hunter TK4 and found ALL of my markers. I was hoping it would (and apparently did) find the large nail that was remaining below the surface, 4 to 10" below the surface. There is no way I could have located those lines without a metal detector. Other detectors may have found them; may have found them better. All I can say is - this did exactly what I needed it to do and so paid for itself in a few hours use! Anything else I do with it is gravy. Hopefully it will be useful in other ways and fun as well. In searching the last leg of water lines I got a ping where I was surprised to find one. So I switched to discrimination mode ... Got a LOW pitched buzz. Manual says ... nickel or GOLD! I'll dig in that place later. Who knows - it might MORE than pay for itself! LOL!
Also, FYI, I found the one survey iron rod for a property corner that was close to where I was working that was hammered beneath ground level in a ditch. (I knew roughly where it was).
A few more technical items: It is lightweight; easy to handle. It is easy to operate; the manual is clear. I'm a first time metal detector user & I feel fairly competent with it already for basic use. Pretty easy to put together, though I'm a little concerned about, as some mentioned, the lower stem to search coil intersection is plastic, with a knurled knob. If the parts are easily replaceable, no problem. Otherwise, might be a weak link that sinks the entire ship. I'm not a treasure hunter (yet) so this may not contain all the stuff you guys would be interested in, but I had read some questions that asked about the kind of interests I had with locating survey rods, etc., so decided to do a review from this perspective.

Michael E.
5.0 out of 5 stars First Time User - Review and Tips
Reviewed in the United States on March 1, 2018
Style: Metal DetectorVerified Purchase
Absolutely love this device. I bought it as a gift for my father to use while he was in a beach house in Florida for the winter. While visiting we used it quite a bit and actually found a lot of metal (see pic). Overall nothing of value, but it was a first time ever user, so finding anything was fun, plus there is definitely a learning curve.

First Time User Experience
It took a couple of trips walking the beach over a few hours to get used to how it works and how to optimally configure and use it. First trip out we had a lot of false positives and it was slightly frustrating. But after some time it became easier and easier to find things. We did not find anything of value but did find many metal items as small as a pull tab ring off a can buried 4" in sand.

Tips
-If you accidentally touch the ground while sweeping back and forth, even very lightly, it will often emit a false positive tone. You will get the feel of when this happens.
-If sand or dirt gets on the top of metal detector end piece that you sweep over the ground it will often give a lot more false positives.
-If you are just starting out, don't expect to find gold and especially don't configure it for just gold/silver. You'll get frustrated fast.
-If you are a first timer i'd recommend the following settings:
1 - Set sensitivity (left side knob) to the 3 o'clock position. Any higher and false positives are common. Lower you may miss things.
2 - Set the toggle switch on the right to center (all metal) so that you can learn how to use it.
3 - Set the disc/notch switch to the 12 o'clock position.

Blue1
5.0 out of 5 stars Great little metal detector.
Reviewed in the United States on February 25, 2018
Style: Metal DetectorVerified Purchase
Nice metal detector, Lightweight, handle extends to fit your size, can easily set the angle of the coil, and the set up is easy and fast. I purchased this for my first metal detector just to start out and i have to say i like it a lot....it was very easy to put together and set up ..I used it the other day for the first time at a local park and i found several coins and i had fun doing it. . For the price you cant beat what you get...If i really get into it i will upgrade but i will always keep this one....going to pick up some earphones for it and i'm good to go ! Do yourself a favor , if your thinking about it just pull the trigger you won't regret it this is a very nice metal detector. Packaging could have been better but that has nothing to do with the performance of the machine.
Read more

David A. Doyle
5.0 out of 5 stars Lost wedding band
Reviewed in the United States on November 3, 2017
Style: Metal DetectorVerified Purchase
Worked like a charm to find lost wedding ring $1000. value so paid for itself. Was in tall thick St Augustine, knew general area and I tried all the tricks flashlight at night, cutting the grass real low and using a fine rake but no luck. After wasting many hours decided to get a metal detector ( its happened before and was lost for over a year even after renting a detector the dog found it and had it with her outside toys) she is a tracking dog so makes sense that she smelled me on it. Please go online and learn how to use it because I was about to give up until I went on Youtube and took some "lessons" found it in less than 5 minutes after "learning proper technique". Look forward to going treasure hunting now.
Read more
275 people found this helpful
Helpful
Comment Report abuse
See all reviews

spbatt
5.0 out of 5 stars The best ‘tried and tested’ metal detector for the money.
Reviewed in the United Kingdom on March 1, 2019
Style: Metal DetectorVerified Purchase
I spent 3 weeks digging around (pun intended) on Amazon and Google trying to find the ideal beginner’s metal detector. The choice is huge and the reviews don’t always stack up... especially when you constantly discover the same reviews for completely different detectors (what is that all about?). So I went to Amazon.com and read even more reviews and that’s when the Bounter Hunter Tracker IV finally registered with me. I followed this up with more Googling about this specific detector and my mind was then made up. The Tracker IV was ordered! Since it arrived I have been out in the garden three times with my 11 year old, getting used to how it works and digging up everything from pull tabs, rusty iron, two old pennies (one dated 1862,) a few small and modern coins, a lead soldier, a lead motorbike and a couple more lead toy things. This is a great entry level detector!! I also read that a lot of serious detectorists learned on the BH Tracker IV and still keep it as a back up to their much more expensive machine. Don’t let all the reviews confuse you... seriously get this one! The two 9v Duracell batteries seem to last well so far and this machine can detect more then 6 inches down. The ‘Tone’ mode will help me (and you) find only the better stuff and leave the ring pulls and rusty iton out of it altogether but it takes some practice with it to understand what the different tones are telling you, I’m working on it. I think you can tell that I am very impressed with it. Ignore every other model of a similar or cheaper price. This is tried and tested technology and will give you a fantastic start in detecting but will also stay with you way beyond the novice level.
Read more
30 people found this helpful
Report abuse

james burchell
4.0 out of 5 stars Very good but....
Reviewed in the United Kingdom on March 4, 2019
Style: Metal DetectorVerified Purchase
My first MD so cant. compare with others. But have found many coins and trash. so i am very happy with it. One warning thou, it does say that it is not waterproof and bye golly its not. One quick short sharp shower caught on a beech, caused the speaker to fail. Now have to use headphones all the time now. 5 stars otherwise.
Read more
4 people found this helpful
Report abuse

Aidan
3.0 out of 5 stars Very capable budget beginner metal detector
Reviewed in the United Kingdom on November 26, 2019
Style: Metal DetectorVerified Purchase
It doesn't have the features of the expensive models of course, and the discrimination is pretty minimal in its functioning, and it will still often pick up iron/steel in the Tone mode which is meant to auto discriminate iron/steel. It also only has one tone in the All Metal Mode and Disc mode, and two tones if in the Tone mode to denote higher or lower resistance metals. It's easily the best detector under £150 though.

Very good for beginners wanting to get into the hobby but you will most likely get a better model in future if you really get into it.
Read more
Report abuse