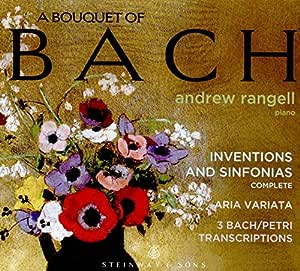 Recognized as among our most eloquent and insightful interpreters of the major keyboard works of Bach and Beethoven, pianist Andrew Rangell has drawn acclaim for a variety of recordings, ranging from the music of Sweelinck, Farnaby, and Gibbons to that of Janacek, Enescu, Nielsen, Bartok, Valen, Christian Wolff, and many others. The present recording, newly documenting Mr. Rangells long and loving exploration of Bach, is also something of a counterpart to his 2-album 2017 release, A Bouquet of Beethoven. Andrew Rangell made his New York debut as winner of the Malraux Award of the Concert Artists Guild, and has since performed and lectured throughout the United States, and in Europe and Israel. He has also taught on the faculties of Dartmouth, Middlebury, and Tufts University. In the 1980s, already recognized as a distinctive recitalist and collaborative artist, Mr. Rangell gained national attention- and the award of an Avery Fisher Career Grant- for his vivid traversals of the complete Beethoven sonata-cycle in New York, Boston, Cleveland, Richester, Denver, and other US Cities. A hand injury sustained in 1991 forced Mr. Rangell to gradually alter the trajectory of his career, and eventually to place his highest priority on recording. His recent previous release, Bach 4 Kids, combines a short Bach recital with a DVD of Rangells childrens book, Peter Pajamas.