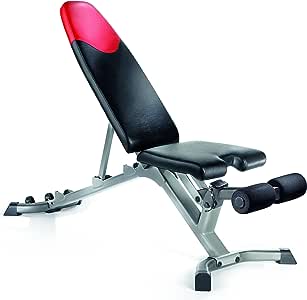 Wheels away for easy storage so you can stow it almost anywhere.

4.5 out of 5 stars
4.5 out of 5
2,477 customer ratings
How does Amazon calculate star ratings?
Amazon calculates a product’s star ratings based on a machine learned model instead of a raw data average. The model takes into account factors including the age of a rating, whether the ratings are from verified purchasers, and factors that establish reviewer trustworthiness.

If you have a 1” x 4” piece of lumber, a couple of wood screws and some glue, you can fix that. See the photos.

I made mine about 6” long. The length you use will determine the angle of the inclination. I was too lazy to actually pull out the protractor, but I think it’s pretty close.

It works for me; maybe it will work for you too — very stable and sturdy!

WDWFan
2.0 out of 5 stars Nautilus no longer supports 5.1 bench
Reviewed in the United States on January 11, 2018
Style Name: Bowflex 5.1 BenchVerified Purchase
The Bowflex 5.1 bench is well-made and appears to be good quality. The box I received was not damaged but everything inside the box was kind of loose and moving around it appeared. I started putting it together and when I unwrapped the padded back to install it, which is one of the last steps, I noticed there was a rip in the upper left shoulder towards the back. It was about 2 inches and some of the padding was coming out. I assumed it was from the items moving inside the box during shipping. The brochure in the box says do not return but call Nautilus technical support for any problems at the number they provided. I called Nautilus and talked to a rep who told me that the Bowflex 5.1 bench is no longer a supported product and that they quit manufacturing it in 2008. He said Amazon must just still have some remaining product to sell. He said the 3.1 and the 4.1 benches are supported products. So he could not provide any solution and told me to contact Amazon about returning it. I can’t imagine trying to put this all back in a box and shipping it back to Amazon only to receive a replacement that might have other problems. So I will probably just repair it with some good old black gorilla tape. I would’ve ordered the 3.1 bench but I liked the extra settings on the 5.1 bench and the 4.1 bench is more expensive. I assume the warranty is not worth the paper that it’s printed on. If you’re considering this bench, it is a well-made bench (other than the rip) but just be aware this is not a Nautilis supported product any longer. If you get one that is not damaged you will like this bench.
Read more

Jeff
5.0 out of 5 stars Quality bench, easy to use, very sturdy
Reviewed in the United States on March 8, 2018
Style Name: Bowflex 5.1s BenchVerified Purchase
Purchased this bench as part of the beginnings of putting together a home gym. We're short on space, so it was important that it had a small footprint. Assembly was relatively straightforward, and if you can put together a small Lego set then this should be a breeze for you. Total assembly took about 30 minutes, and you'll want a knife or a pair of scissors to work through the packaging. Allen keys to assemble everything are included. During assembly, the "heavy-duty-ness" of the frame was apparent, and I wouldn't hesitate to load this bench up with the recommended max weight (person plus weights) of 600 pounds. Once assembled and flat, it does take up some real estate; in the stowed position, that's cut down to about 1/3rd.

In the fully declined position with seat lifted, decline sit-ups feel just right with the ankle bar. The flat position is rock-solid when doing bench presses, and it's very nice to have several options for incline. The mechanism for raising/lowering the bench is a spring loaded "pull pin" type which allows the upright support arm to glide easily up and down the floor leg - no grinding or scraping sensations. Once your desired position is selected, you can allow the pin to pop in place which fully secures the back rest. Optionally, you can twist the same handle to lock the support arm and leg together to eliminate any play between them. The seat has two position options, flat of course, and then raised. In the raised position, it's high enough to fully prevent sliding down the seat when doing incline work but not so high as to be distracting. With the seat raised, it's also set at the same angle as the backrest when fully lowered, providing for a great base for decline work or for decline crunches/sit-ups. The seat mechanism is simple. Lift the seat up to lock it into the up position. Lift a small red lever to allow the seat to drop back down to the flat position. The rounded edge of the seat has plenty of flex to it, almost like I'm sitting down in my favorite recliner at first. I worry that this flex may lead to long term wear and tear issues, but without knowing the internal design of the cushion (no, I'm not tearing it apart) I have no evidence to suggest that my worries are true. The ankle holders are foam, not super soft, and they seem like they'll hold up for a good while - time will tell on both items.

The ankle holder folds up for storage, but the mechanism which allows it to fold up also allows for some free play. You can get it to rattle quite a bit and make some noise if you grab it and shake it, though good security of the mechanism is apparent, and I expect it to be very reliable.

The feet of the bench are adjustable, so if you don't have a perfectly flat floor, it will allow you to compensate. Some have indicated that the gap between the back rest and the seat is very wide. There is truth to that; the gap is 4" when the bench is fully flat and 2" at a 45 degree incline and raised seat. At a 90 degree incline, the back meets the seat. It would have been possible for Bowflex to eliminate this gap, but it would have required a much more complex mechanism resulting in either a higher cost or a lower quality product. To be honest, I find that my butt rests perfectly in the gap on a flat bench when my ankles are under the ankle supports which allows the back rest to provide support to the arch of my back, sort of like how a good car seat provides just that little bit of much needed support. Because the seat is roomy though, there is some space to move around a little bit, perhaps to locate the gap directly under the arch of my back, but there was no way that I could completely eliminate the feeling of the gap. The best that I could actually come to getting a "gapless" sensation was to actually lie on the bench backwards with my head on the seat and spanning the gap with my neck, though even that wasn't perfect. If you require a bench with minimal gap, definitely look elsewhere.

Beyond that, the quality of the material looks solid, and I'm not worried that I'll damage the upholstery. It also looks very sharp. Oh, when it's on the casters, it doesn't *quite* fit through a standard 30" doorway unless the door opens a full 180 degrees. The total width of those legs is probably 28 1/4" wide. If you can turn it and pick it up though, not a problem.
Read more

Clifford R. Browning
5.0 out of 5 stars Most complaints come from people who haven't lifted much IMO. I'll tell you why.
Reviewed in the United States on April 15, 2018
Style Name: Bowflex 5.1 BenchVerified Purchase
People complain about the gap between the seat and the back when it is laid flat, the fact that it isn't a perfect 180 degrees flat, or that some people's feet don't touch flat on the floor. Even my gf, who instructs classes at the ymca, said something about her feet barely touching and she is 5'6". I'm 5'9" and none of these are real issues. First off your back isn't flat anyway and I push my shoulders back and touch my blades together when benching. The natural arch in the back between the mid back and hip is normal and doesn't hurt benching. The gap doesn't bother me and sometimes I even slide my butt into it on purpose. As far as my feet go I either put part of them on the front legs or on the front balls of my feet anyway. None of these complaints will affect your exercise. I always take the time to get my body positioning right when I lay on a bench.
Read more
51 people found this helpful
Helpful
Comment Report abuse

Amazon Customer
5.0 out of 5 stars Great bench but must remove leg support
Reviewed in the United States on July 20, 2018
Style Name: Bowflex 5.1s BenchVerified Purchase
I received this bench yesterday and assembled it today in about 30 minutes. It's actually a pretty study bench that is well manufactured. There was another bench that I was considering called the XMark Adjustable FID Weight Bench. Although the XMark bench is less expensive (about 20 bucks less) and can handle a larger weight load (1500 lb. capacity vs Bowflex's 600 lb. capacity), I couldn't get past the fixed/welded leg attachment used to support the bench's decline feature. I have the heavy Bowflex 1090 SelectTech Dumbbells and it would be difficult to mount and dismount any bench that has this leg support feature in the front of the seat. Although the Bowflex bench has the same support feature, it is easy to remove and that's exactly what I did. If you don't remove it and you are using dumbbells you will really see how it gets in the way of your workout.