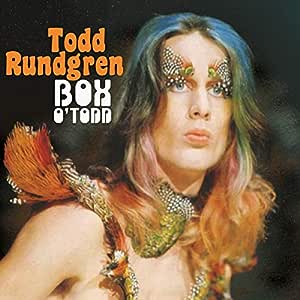 Special limited edition collector's box featuring previously unreleased recordings from the early '70s by legendary guitarist/songwriter/producer, Todd Rundgren!This unique box features both stripped down solo performances by Rundgren as well as full band recordings with The Hello People, and includes some of Rundgren's most well-known songs including "Hello, It's Me," "I Saw The Light," "It Wouldn't Have Made Any Difference" and many more!In addition to three full-length CDs, the box set comes with a full set of insightful liner notes by Dave Thompson, full color photos, a signature guitar pick, 3 collectible pins, and a backstage pass!

4.6 out of 5 stars
4.6 out of 5
13 customer ratings
How does Amazon calculate star ratings?
Amazon calculates a product’s star ratings based on a machine learned model instead of a raw data average. The model takes into account factors including the age of a rating, whether the ratings are from verified purchasers, and factors that establish reviewer trustworthiness.
Top reviews

Tyrone Rex
4.0 out of 5 stars a box of Todd (and other songs)
Reviewed in the United States on October 6, 2019
Verified Purchase
I normally give five stars for Todd stuff, but this contains material by Todd and the HELLO PEOPLE. Some of their tracks are not as endearing as Todd's. I guess he wanted the songs presented in their original context. I would have edited out some of the in between song banter and the Hello people songs. This could have been a 2 cd set, that would play better from end to end, hey but that's me.
Read more
One person found this helpful
Helpful
Comment Report abuse

John Schwittek
5.0 out of 5 stars Amazing Recording's From Very Early Todd on the Radio. Excellent.
Reviewed in the United States on April 11, 2016
Verified Purchase
This is Amazing. High Quality recording from Todd Rundgren's Radio Concerts in 70's. All the joking around on stage is left intact. A+ Runt.
Read more
9 people found this helpful
Helpful
Comment Report abuse

Barry P. S.
5.0 out of 5 stars So much fun.....
Reviewed in the United States on May 1, 2018
Verified Purchase
I don't know what one reviewer here listened to.....but this has GREAT sound and it's just sooo much fun. Well worth any fan's cash. Buy it if you like Todd and his early sort of wackiness and tooons!
Read more
One person found this helpful
Helpful
Comment Report abuse

Anthony Valenzuela
4.0 out of 5 stars Four Stars
Reviewed in the United States on February 26, 2018
Verified Purchase
The packaging was great! The recordings are very listenable not great.
Read more
One person found this helpful
Helpful
Comment Report abuse

Grateful JerryTop Contributor: Folk Rock
VINE VOICE
5.0 out of 5 stars Classic early vintage era Todd ('71 - '73)
Reviewed in the United States on March 20, 2016
Box O' Todd is a collection of of early Todd shows. Each disc is a different show representing a different year (06-30-71, 05-02-72 and 11-11-73). The shows had been available for quite a while as downloads and various songs have turned up on the Japan import Somewhere, Anywhere as well as For Lack of Honest Work. Some songs also turned up as bonus tracks on some versions of Runt, The Ballad of Todd Rundgren and Something, Anything. The first two shows in the set find Todd backed by The Hello People and there's just as many songs of theirs as there is of Todd's. The third and final show is an early performance with Utopia recorded shortly before their first album was released. The performances are top notch and the sound quality is generally very good. This is a must own for anyone who loves early Todd.
Read more
34 people found this helpful
Helpful
Comment Report abuse
See all reviews from the United States

tpbdurisdeer
5.0 out of 5 stars Excellent live early Todd!
Reviewed in the United Kingdom on May 5, 2016
Verified Purchase
Three concerts of early Todd featuring the Hello People and Utopia. Sound is generally pretty good with the weakest being the Todd + Utopia concert from 1973 which suffers from quite a lot of tape 'wow' and a slightly muddy sound. That said, each concert has a its merits and benefits from the on-stage banter being left intact.
This is essential,if you're a Todd Rundgren fan.