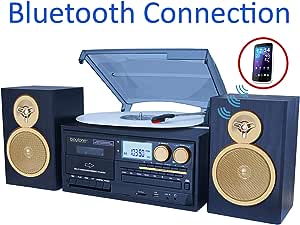 Brand: Boytone
3.8 out of 5 stars 167 ratings
| 82 answered questions
Currently unavailable.
We don't know when or if this item will be back in stock.

3.8 out of 5 stars
3.8 out of 5
167 customer ratings
How does Amazon calculate star ratings?
Amazon calculates a product’s star ratings based on a machine learned model instead of a raw data average. The model takes into account factors including the age of a rating, whether the ratings are from verified purchasers, and factors that establish reviewer trustworthiness.

Amazon Customer
3.0 out of 5 stars Decent System for the Price
Reviewed in the United States on November 27, 2017
Verified Purchase
Considering the relatively low price for this shelf system it actually has quite a few nice features.

As you can see in the photo provided, it has a very nice wood grain look that looks great in a wood cabinet or entertainment center. Its relatively small size enables it to fit well inside the shelves.

The speakers combined give out a respectable 24 watts of power. I was able to successfully pair them with my smart TV buy using the TV’s optical outlet, a Toslink cable, and digital to analog converter box, the latter two beijg inexpensive and easily obtainable on Amazon. The Toslink cable connects to the front of the Boytone component at its Aux jack.

Another plus is the unit’s Bluetooth connectivity, which enables my iPhone to easily reach the system’s speakers and play either downloaded (iTunes) or streaming (YouTube or other) music.

I have not yet tried the system’s apparent capacity to move music from our old vinyl and cassette collections to digital (usb thumb drive) format, but find that option amazing.

The system also has some serious limitations:

(1) the remote provided is a total joke. It does not turn the unit on or off, and has no controls for most functions, such as volume.

(2) there is not even the most basic function anywhere for adjusting the tone, balance, or other controls one would expect to see, even on the cheapest radios and systems.

(3) the wiring between the main unit ahd the two speakers is just a couple of feet long, which requires adding analog extensions to get them to reach any but the closest shelves. This issue is easily and inexpensively fixed.

(4) I have not been able to hook up the system to my Yamaha Soundbar using the analog jack. Only a whining sound emerges.

Overall, I am mostly satisfied with this inexpensive system, but a few minor upgrades from the manufacturer (enhancing the remote, making the wires to the speakers longer, and adding tone and balance controls) would make it a much better value.

Rachael
1.0 out of 5 stars Does not play regular 12" records......
Reviewed in the United States on August 31, 2018
Verified Purchase
Not mentioned anywhere in the description or reviews: this won't play regular vinyl albums. VERY misleading. Don't buy this if you're intending to use it for the turntable.
Read more
40 people found this helpful
Helpful
Comment Report abuse

KK
5.0 out of 5 stars The tape deck is on the front! With buttons!
Reviewed in the United States on February 23, 2018
Verified Purchase
I do recommend this if you're looking into an all-in-one stereo unit and don't have high expectations. Build quality and the like is about what you'd expect for the price: fine for basic home use. Luckily, I'm a basic home user, so no complaints on that count. There is a sticky bit on the top (towards the front) that will probably require some Goo Gone but it arrived otherwise perfect.

The main draw for me was that the cassette deck is on the front with all buttons, rather than on the side with one button only. I'm not sure why so many similar units have a single centered CD tray taking up about half the real estate on the front, while they shove the tape deck off to the side. This design makes good use of the stereo face, so this is the one I bought.

I've only had this for a few days, but here is my initial review, a bit more detail:

Design: As stated elsewhere, the design of the unit is what made me decide on this unit in particular. I appreciate that the stereo face is jam-packed with features, the tape deck is full-featured and on the front instead of shoved to the side, the CD tray isn't annoyingly placed, and that the speakers aren't built in to the unit. The color (gold) is not my favorite, but the way they used the color on the faceplate is not bothersome, and was cheaper than the other colors by about forty USD. The speakers are ugly, but I'll probably replace those eventually with nicer (and less garish) ones. Everything is fairly light, weight-wise.

Sound: The speakers are obviously not serious audiophile quality, but they are louder than any other speakers in the house and sound fine to my ears. They do have some bass, though not much, and there is no bass boost on the stereo.

Record player: This functions fine, has the usual 3 speed settings and a toggle for the auto stop when the record ends. No complaints about the sound quality or functionality. (This is also my first record player, so take my lack of complaint with a grain of salt.)

Tape deck: I love this thing! I have a couple minor complaints: the plastic casing on the tape deck feels... flimsy, both when inserting a cassette and when closing it to play. The buttons are pretty hard to press at first (I had to steady the stereo with my other hand to avoid pushing the whole unit back), but put in an old tape you aren't afraid of breaking and play with it a bit; fixed it right up for me. It has not yet eaten a tape.

CD: This is fine. I appreciate that the CD tray is powered, and feels sturdy. The CD control buttons on the stereo face are flimsy, but I don't plan on using these much as I'm more interested in playing records & tape, or bluetooth from my phone. The "REPAT" (repeat, I assume) button is on a little cockeyed, but only noticeable when you're staring it down for not having that extra E on the label.

Radio: I tried FM only, but the audio quality is pretty good for standard radio. The stereo has a radio antenna attached to the back, as you can see in the picture, I just kind of halfheartedly taped it up in a way that wouldn't get in the way of record playing. The 'tuning' knob is a little slow/annoying when you want to get from one end of the dial to the other. No presets, but it does remember the station you chose last.

Display: This is SUPER BRIGHT blue with no way to turn down the brightness. I would have preferred a different color, or no backlight at all.

USB/SD: Haven't used these, I assume they work fine. They use the same buttons as the CD function.

Brenda M
4.0 out of 5 stars This is a really nice piece
Reviewed in the United States on October 24, 2017
Verified Purchase
This is a really nice piece for the price. The sound is awesome but I bought a set of lava speakers to go with it but there is no place to connect them. Just wish it had hookup for second set of speakers.
Read more
24 people found this helpful
Helpful
Comment Report abuse

Tori
4.0 out of 5 stars Now that I got one that works, it works great
Reviewed in the United States on August 24, 2018
Verified Purchase
Customer service issued a refund after we sent back the malfunctioning stereo and the new one works great. The speakers are more than decent for what you're paying, and all the functions we've tried so far do work. It's a fun little addition to the home. My only really big complaint (which really doesn't effect the product) is the "gold" one shown with blue wood panelling is definitely not blue, or if it is it shouldn't count as blue.

Original review: We had these speakers for a day without a problem. Bluetooth hooked up right away, records played, everything was great. Except what we received was black, not blue as the picture showed which was a disappointment. Now the bluetooth hooks up but the audio is extremely quiet and distorted.
Read more
9 people found this helpful
Helpful
Comment Report abuse

Preferred Customer
1.0 out of 5 stars Blown or not enough power to speaker
Reviewed in the United States on November 14, 2018
Verified Purchase
If you really wanna listen to a record asap this is your choice, but if you want to listen to quality this isnt it. Either the right speaker isnt getting enough power or its blown. Theres almost no bass, I have a a JBL pill the very first edition and it hits harder. The picture is also slightly deceiving the gold looks shiny in the pictures...its not more of a matte gold.
The good news is the CD player worked, aux worked, phonograph worked, blue tooth worked, radio worked...as for everything else I'm not sure speakers 1 outta 2 worked, lights worked.
Read more
9 people found this helpful
Helpful
Comment Report abuse
See all reviews from the United States

John M
3.0 out of 5 stars Refund with return of machine, or an upgrade to a higher end,pricier setup req'd.
Reviewed in Canada on January 3, 2019
Verified Purchase
The compact size is OK, and the price. I cannot add two computer speakers via aux to provide a fuller Bass and Treble.
My boom box with two added computer speakers via AUX produces a fuller bass and treble experience.I cannot add two more speakers via the AUX for a 4 speaker experience.Either the 2 box speakers, or two via AUX.
I now see that I needed to spend considerably more money for a product with a fuller range of sound in both bass and treble.If you have an upgrade model, please advise.It is a versatile machine .However,the buttons are hard to read .I thought the dark blue, not black model was ordered.
Please send a return label via e-mail at the earliest convenience.And please advise if there is an upgrade available.
Read more
Helpful
Sending feedback...
Thank you for your feedback.
Sorry, we failed to record your vote. Please try again
Report abuse