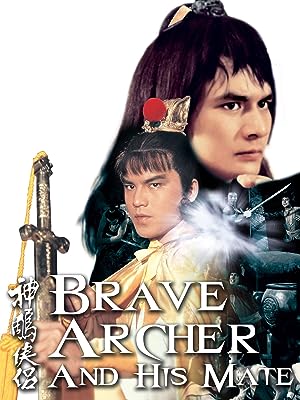 Brave Archer and His Mate

(66)5.51 h 40 min198216+
Brave Archer and His Mate is the fourth in a series originally starring international favorite Alexander Fu Sheng as master martial artist Kuo Tsing. Kuo Chui is the new hero who is out to defeat the mass murderer of his martial arts masters.

Ron2900Reviewed in the United States on February 13, 2016
4.0 out of 5 starsAnother Fine Offering From Tokyo Shock
Verified purchase
Here are the correct product details for The Brave Archer (1977) aka Kung Fu Warlord.

Video: The Brave Archer is presented in 2:35 anamorphic widescreen and the excellent remaster job from Celestial looks great.

Subtitles: There are English subtitles that are actual subtitles and not just dub subs (subtitles for the English dubbing track) that I've seen on many other kung fu dvds.

If you enjoy old school Shaw Brothers, you can't go wrong with this purchase. It is a shame Tokyo Shock cancelled the planned release of the second installment of the Brave Archer trilogy AND of one of the Venoms best films, The Magnificent Ruffians.

nycReviewed in the United States on April 23, 2017
3.0 out of 5 starsPart 1 of 3 Part Series: Two Sworn Brothers Each Have a Son, But Kids Split Up, One Good and One Bad
Verified purchase
This movie is in Mandarin and has closed caption if you turn it on. As of June 2017, this movie title showed a different movie on Amazon than the one prior to June 2017 (which you will find reviews for a different movie). So, here is a review of the revised version. The revised version is one of three part series, so locate the Brave Archer 2 and 3. I think they made a mistake with the title as there is no archer in this movie. As for this first movie, the story is about two sworn brothers who each has a wife and child. The children were born at around the same time. A Taoist monk who is a family friend names the two kids and offers them each a sword. The mothers exchanges to swords, so that they have the names of the other kid. However, the two sworn brothers were attacked by a prince's army. One wife and her child is saved by seven kung-fu masters while the other wife and child is taken by the prince. The kid who is raised by the seven masters has a moral compass and seems to be a good guy who attracts more kung-fu masters along the way. The other kid raised by the prince is going around being playful and lies to his mother, and just doesn't seem to concern himself with morals. One of the fathers was killed in the attack while the other father raised an adopted daughter. Somehow one day, the three kids meet and the father is taken back to the prince's home as a prisoner and finds his ex-wife there. In the end, the two brothers go their separate ways without knowing there fathers' past. The kid with the moral compass becomes attracted to a girl of a great kung-fu master, and must pass an exam to marry the girl. Be aware this movie doesn't have too many fight scenes, but has a decent story that continues to part 2 and 3.

This movie on Amazon was a different movie prior to June 2017:
Villain Has a Son Who is Adopted by Good Parents Who Wants Him to Be Good, But the Son Strays:
Good story about a young man who is the son of a major villain. His father was killed by another villain, but he mistakenly believes that his adopted/god parents are the ones who killed his father after hearing this from that villain even though this villain is the actual killer of his father. The parents who adopted him are actually the good people and their goal was to make sure that this kid grows up to be good knowing that his father turned out to be a bad guy even though he grew up along side with his god father at a monastery. The problem with this film is the ending is very abrupt as if there is a part II to this film. We don't know what happens to this son after the god father takes him to the same monastery that his father learned his kung-fu. The fight scenes were well choreographed and story is good, but the ending needed work.
2 people found this helpful
Report abuse

amazon customerReviewed in the United States on September 5, 2016
5.0 out of 5 starsawesome
Verified purchase
awesome hand-to-hand combat fight scenes. I read the books as a teenager and this brough back so much memories. The books are better, always. Alexander Fe Sheng was the best. Glad Amazon is able to provide these movies for escapism.
2 people found this helpful
Report abuse

Chris R.Reviewed in the United States on April 2, 2020
1.0 out of 5 starsNOT IN ENGLISH
Verified purchase
NOT IN ENGLISH
the description says "ENGLISH" BIUT IT IS NOT.
I already have the Mandarin version on VHS. I want the English dubbed version on digital.
Report abuse

PalidenReviewed in the United States on August 15, 2016
3.0 out of 5 starsCould have been better watch 1 2 & 3
Verified purchase
This is just an ok Brave Archer bill I'm writing this because somebody said it was supposed to be the best in the group and it was the worst of the four number one and number 2 we're all 5 stars excellently filmed lot was understandable this one here was very disjointed and kind of left you hanging at the end
2 people found this helpful
Report abuse

2CentsReviewed in the United States on December 16, 2014
5.0 out of 5 starsI love Kung-Fu Movies
Verified purchase
Great action, great fight scenes, skillful actors. The plots tend to always be the same (avenging a murdered master, rescuing a kidnapped girl, challenging a drug lord, etc….). But I watch them for the great choreographed fight scenes.
Report abuse

William C.Reviewed in the United States on December 26, 2016
4.0 out of 5 starsIt's still fun. Except
Verified purchase
I actually saw this when I was in high school (thirty some years ago). It's still fun. Except, it was in Chinese without dubbing and without English translation
Report abuse
See all reviews
Back to top
Get to Know Us
Make Money with Us
Amazon Payment Products
Let Us Help You
EnglishChoose a language for shopping. United StatesChoose a country/region for shopping.
© 1996-2021, Amazon.com, Inc. or its affiliates