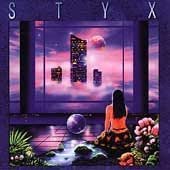 While not exactly a return to form, the first studio record since 1983 by the classic Styx trio of Dennis DeYoung, Tommy Shaw, and James Young will undoubtedly please hard-core fans. There's nothing here on the level of "Come Sail Away," "Miss America," or "Lady," but that trademark combination of thrilling, arty hard-rock sounds and gently swooping, full-blown ballads continues. Dennis DeYoung's crazily high-pitched voice still hovers admirably in the castrato range for the most part, though time has introduced a few rough edges. In grand art-rock tradition, the record's supposedly got something to do with futurist British scribe Aldous Huxley (one of classic rockers' favorites), but if anything will bother the listener, that's not it. Songs such as "Number One" reveal an attempt by the band to update their sound with newer variations on hard rock; the result is less than satisfying. When they stick to the old formula, as with "I Will Be Your Witness" and "While There's Still Time," it's like grunge never happened, which is what this nearly-30-year-old act are supposed to sound like. --Mike McGonigal

4.4 out of 5 stars
4.4 out of 5
123 customer ratings
How does Amazon calculate star ratings?
Amazon calculates a product’s star ratings based on a machine learned model instead of a raw data average. The model takes into account factors including the age of a rating, whether the ratings are from verified purchasers, and factors that establish reviewer trustworthiness.
Top Reviews

Gary E. Decker
5.0 out of 5 stars Styx still hasn't lost their touch...
Reviewed in the United States on July 12, 1999
Verified Purchase
The first time I listened to Brave New World, I thought to myself, "Wow!" Now only was this new Styx, but...much different than I'd ever heard them (and I've heard most of their work). True, you have the obligatory DeYoung schmaltz songs, and one of them, "High Crimes and Misdemeanors," sounds like something from a Mel Brooks movie, ala "The Inquisition." The rest of it is quite new and fresh. "Everything is Cool" gets radio play here in the Midwest, and is great. One of my personal favorites is "Just Fell In," a Tommy Shaw tongue-in-cheek song about a man who ran afoul of the law. Shaw, who wrote and performed most of the songs on this album, never sounded better. JY plays the guitar like he means it, giving the band a new, "rockier" edge, and is in very good voice. DeYoung, although he still has that incomparable voice (aged ever so slightly), has become so much of a caricature of himself with his songwriting and performing that he is best suited for harmonies with Shaw (which still sounds awesome). This isn't Broadway, Dennis, it's a Styx CD. All in all, however, if you're a Styx fan, it's a must have.
Read more
3 people found this helpful
Helpful
Comment Report abuse

jowe
4.0 out of 5 stars Quite enjoyable; on 2nd listening you'll really like it!
Reviewed in the United States on October 23, 1999
Verified Purchase
The first time I listened to the album, I wasn't sure about it. Having been a huge Styx fan over the years and having followed each of the band members' solo careers, I had some high expectations. I must say that as of the second listening, I was thoroughly pleased!
While there are definitely some changes to the Styx sound on Brave New World, long-time fans will find that there is still a lot of the old style to be found. Dennis's ballads are still a pleasure to listen to; Tommy's choruses kick up the tempo; and there are a few good rockers where J.Y. takes the lead! I've found that pretty much every song on the album is one that can get stuck in your head, so in my mind that makes this a 4-star effort and definitely worth owning for all Styx fans.

financialambster
5.0 out of 5 stars Brave New World
Reviewed in the United States on November 17, 2010
Verified Purchase
I've been a Styx fann for years. I didn't even know this CD existed and was anxious to give a listen. The first time I listened to the entire CD, I wasn't sure if I liked it or not. It's definately a different sound, but as I listened to it 2nd time on another occasion, it started to grow on me. Third time, I was hooked!

I actually like it better than some of the past Styx that I have loved for years.
It is refreshing to still have the old Styx style with a new sound. A definate recommendation for any Styx fan's library.

R. Long
5.0 out of 5 stars A Brave New Era for STYX and TRUE FANS of the band.
Reviewed in the United States on May 6, 2009
Verified Purchase
Some folks are dismissing this cd apparrently because it is not a lot like "The Grand Illusion" and "The Paradise Theater", or one of the band's most blatant thematic album efforts.

To start this review, this was NOT a collaborative effort. Dennis could not leave Chicago and this cd was the best contributions of Shaw, Young and De Young. Still overall this is one of the best Styx cds out there. I can say this because I keep listening to it. I recognize the weaknesses of the lack of collaboration and how the cd is not a carbon copy of the classic idea of what STYX is suppossed to be. Some folks dismiss this cd because Dennis was not in charge, or because he didn't take charge, or because the band, AGAIN, could not work together. But regardless of the shortcomings of Shaw, De Young and Young and the band, this is still a very interesting cd, and for what it may be worth it seems that Tommy Shaw carried the project.

Now, what is weak on this cd. "Brave New World Reprise" has to be one of the worst songs that STYX ever put together. It is on the level of "Music Time". The song tries to tie the album together but mostly the songs sounds like a very poor demo. Clearly the song should have been left off of the cd. Also, I don't care for "While There's Still Time." Ok, Dennis is a good singer, we all know that, but c'mon, this song is pure De Young cheese. I don't want to hear another song about how Dennis does not want to leave his wife. Don't be a pussy Dennis. You CAN love your wife and still tour and work with your band mates. Dennis could not LOVE STYX more than his wife and his other professional affections and as a result the band moved on without him. This is of course just my interpretation of the situation. Ok, I also think the LIVE versions of Everything is Cool and Heavy Water are better than the studio versions, but this is a pretty normal sort of thing. STYX is a great live band so don't be surprised if the studio versions are a little bombastic. STILL, I LOVE both songs and they are two of the BEST songs that STYX has ever put together. Also, What is the deal with "Just Fell In"? Now the song is not so bad but why is it so much like the theme song for the tv show "Blossom"? Ok, maybe Tommy has seen Blossom. I'm just recognizing the point that someone else made. Really, it's no big deal and I like the song.

And as for the rest of Dennis' contributions, "Fallen Angel" is great. "Great Expectaions" is again, GREAT. And "High Crimes and Misdemeanors/Hip Hop-Cracy" has once again left STYX fans a little embarrassed. It's Kilroy all over again. And I'm laughing, but not at STYX but at how the band can be so comical and silly.

Anyway, if Dennis really gave a DAMN this could have been a BRAVE NEW WORLD for STYX. Now, I'm really sorry if Dennis was ill, but it also SEEMS that Dennis' heart was really with his wife and with his other
professional aspirations. So Tommy and James and the band moved on. The band wanted to PLAY and to be STYX. As for Lawrence Gowan, he is no Dennis De Young, but the guy is a GREAT team player, and he does BIG things for STYX. I LIKE the guy even if he is not a great singer. And "A CRIMINAL MIND" is a GREAT SONG.

So, in conclusion, I have to tell the world that this is one of STYX's BEST cds, by accident or just by DESTINY.

Dennis, you are missing out on so damned much.

But I think things worked out for the best.

Dennis, keep on loving your wife and family and we still love you TOO!!!

Joseph D. Martin
5.0 out of 5 stars Styx album
Reviewed in the United States on February 19, 2016
Verified Purchase
I have been a Styx fan since 1975, and this did not disappoint me.Not the best they ever did, but I still love their sound.
Read more
Helpful
Comment Report abuse

TSW
5.0 out of 5 stars Five Stars
Reviewed in the United Kingdom on October 23, 2016
Verified Purchase
All good
Read more
Helpful
Sending feedback...
Thank you for your feedback.
Sorry, we failed to record your vote. Please try again
Report abuse

The Bandit
4.0 out of 5 stars Decent condition
Reviewed in Canada on December 26, 2019
Verified Purchase
Disc was pretty scratched for my liking, but still playable. I will probably get it re-surfaced.
Read more
Helpful
Sending feedback...
Thank you for your feedback.
Sorry, we failed to record your vote. Please try again
Report abuse

dmitry
5.0 out of 5 stars Thank you I loved your
Reviewed in the United Kingdom on October 15, 2014
Verified Purchase
Thank you
I loved your cd
Read more
Helpful
Sending feedback...
Thank you for your feedback.
Sorry, we failed to record your vote. Please try again
Report abuse