You've subscribed to The Chasing Graves Trilogy! We will preorder your items within 24 hours of when they become available. When new books are released, we'll charge your default payment method for the lowest price available during the pre-order period.
Update your device or payment method, cancel individual pre-orders or your subscription at
Your Memberships & Subscriptions
There was an error. We were unable to process your subscription due to an error. Please refresh and try again. 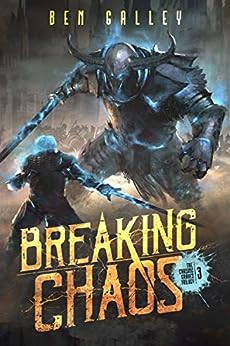 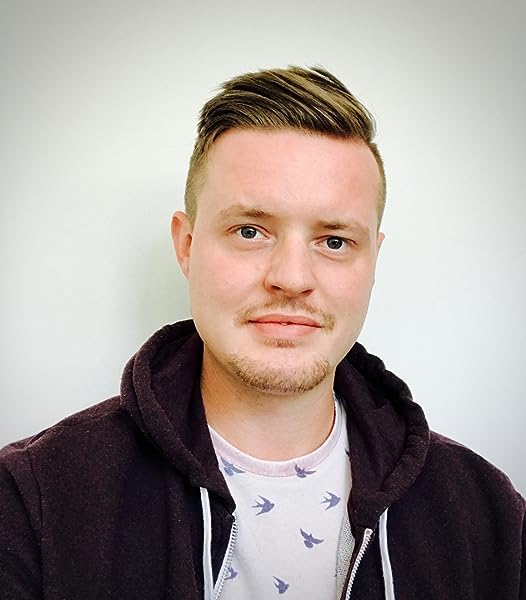 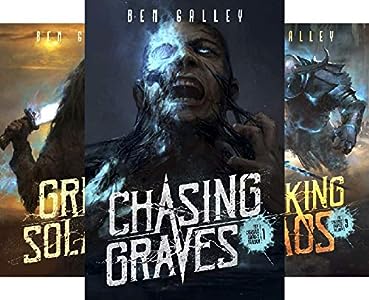 Ben Galley is an author of dark and epic fantasy books who currently hails from Victoria, Canada. Since publishing his debut Emaneska Series, Ben has released a range of novels set in strange, unforgiving worlds, including the award-winning weird western Bloodrush and standalone novel The Heart of Stone. He is also the author of the critically-acclaimed Chasing Graves Trilogy and new Scalussen Chronicles.When he isn't killing off hordes of fictional beings, or arguing the finer points of magic and dragons, Ben enjoys exploring the Canadian wilds and sipping Scotch single malts, and will forever and always play a dark elf in The Elder Scrolls. One day he hopes to live in an epic treehouse in the mountains.Ben can be found on Twitter or vlogging on YouTube @BenGalley, or loitering on Facebook and Instagram @BenGalleyAuthor. Or just go to bengalley.com for all Ben's info.Get The Iron Keys, an exclusive, FREE short story set in the world of Emaneska when you sign up to Ben's Guild Newsletter at eepurl.com/c8F7Av

"Breaking Chaos is the payoff we've been waiting for... a cathartic release of all the angst and terror and scheming plots and secret vendettas, all tightly woven into a massively entertaining conclusion that far surpassed my expectations."

"Breaking Chaos is the brutal, climatic ending to one of the finest dark fantasy trilogies in recent memory. If you haven't read the previous entries in the series, do yourself a solid - get them!"

"To say that the concept of Chasing Graves is grimdark would be an understatement... The world building is fantastic and reminiscent of Michael Moorcock's Elric series."

"Chasing Graves might well be one of the best releases not only for December but for the entirety of 2018."

"The writing was smooth, fluid and beautiful at times. It never failed to create an awesome atmosphere. 90/100."

Selbinius
5.0 out of 5 stars I Devoured these Books!
Reviewed in the United States on May 1, 2020
Verified Purchase
After reading various entries in a number of authors' series, it was nice to sit down and devour an entire series without interruption, and I can't think of or imagine a better choice -- congratulations to me!

There is one major spoiler in this review, but I don't see any way around it. Our protagonist, a not-so-humble locksmith/thief, dies in the opening pages of book one. As if that were not unfortunate enough, he has died in a culture that enslaves the ghosts of its dead. So, essentially this character, a sort of Everyman named Caltro Basalt, spends the series looking for freedom and justice. Along the way, he makes some terrible enemies and a few very unlikely allies, one of whom is a talking sword he calls Pointy.

There are some fantastically strong female characters -- even a co-protagonist -- characters of both brawn and brain who are every bit as interesting as our hero. And the villains? Well, forgive my saying so, but they're to die for. At least everyone around them thinks so.

The series features excellent and varied action and even a healthy dose of humor. I also really enjoyed the North-African vibe to the world. Sometimes it's nice to get out of those vast European forest environments.

Anyway, I loved every book in this series. Bravo!
Read more
One person found this helpful
Helpful
Report abuse

Natasha G.
5.0 out of 5 stars What a ride
Reviewed in the United States on December 30, 2020
Verified Purchase
I sit here writing this review having just finished the book and am totally blown away at the ending. I hope that maybe one day we get more stories from this world. I really didn't want this to end and I have never had this many emotions for ghosts of any kind. This trilogy is well worth the read, the character growth and pace keeps you glued to the story waiting to see what comes next and how it all comes together.
Read more
Helpful
Report abuse

Kindle Customer
3.0 out of 5 stars Confusing at best.
Reviewed in the United States on September 8, 2019
Verified Purchase
I read all three books. I guess holding out hope it would get better, then eventually just wanting it to end. When it wasnt confusing, it was long winded. I dont want to spoil it, so i will just say the end was a big cluster of total confusion.
Read more
Helpful
Report abuse

sherry
5.0 out of 5 stars Gripping and thought provoking
Reviewed in the United States on March 20, 2019
Verified Purchase
Loved the alternative universe. Did not like the fact if we humans could enslave the dead I know for a fact we would.
Read more
Helpful
Report abuse

Amazon Customer
1.0 out of 5 stars Wish it was better
Reviewed in the United States on February 21, 2021
Verified Purchase
I mean, the character is literally called a crass man. (Krassman) and swears a lot. The story is so much better than the writing it is painful
Read more
Helpful
Report abuse

superstardrifterTop Contributor: Fantasy Books
5.0 out of 5 stars Fantastic Conclusion!
Reviewed in the United States on May 7, 2019
Oh Caltro. What a fun character. In this last volume, Caltro is so, so near freedom, even if it’s dead freedom. Boss Temsa and the Widow Horix have had him bouncing back and forth between them, but the dead gods that have appeared to brighten his days every now and then to continue to tell him that he has an important job to do. So, he and his faithful (and mostly-inanimate) sidekick Pointy may have to save not only the day, but everyone and everything as well.

Meanwhile, Nilith has finally made it to Araxes across the brutal dunes, only to find that the Nyx river, the water needed to bind the dead, is drying up. Enemies she made on her journey are still chasing her, and it’s become a race to the end of her quest.

Sisine and her efforts to be the emperess-in-more-than-waiting is being met by defiance of the council of sereks, and more than ever she needs to get her father the emperor out of his sanctuary. Because he’s a crap emperor and she could do better, of course!

And the mysterious Church of Sesh is planning and plotting in the background… but what is it that they are plotting towards? Dun Dun DUNNNNNN.

I’ve really loved how fast paced and fun this series has been. It’s dark, when it needs to be. There’s all kinds of gruesome murder and what have you. I mean the entire premise of the thing includes a great deal of death in various forms, but it never takes itself entirely seriously, and that is what has made the whole story such a winner for me. Even the informational quotes at the beginning of chapters have a few laughs in them.

The writing was immersive and descriptive, with imagery that sometimes made my eyes widen with a bit of awe at the comparison. That said, I never found it overly descriptive, or to the point where it was boring or just gross. But using the image of a pomegranate thrown against a boulder as a simile for… well, something much grosser than that, was brilliant use of language. At least… I thought so. I can imagine the city of Araxes and its many denizens fairly well.

I love Caltro, and have loved him through this entire journey. He is snarky and usually has a comeback for anyone, no matter how above his station they may be, and he has the confidence he needs to be what he is. He is the best locksmith in the entire Reaches, damn it, and that makes him important! I also really liked Nilith. I wasn’t sure in the beginning of the series what I thought of her, but by the end of it, I was on Team Nilith 100%. She is snarky and full of wit at times too, and despite how arduous her journey has been, she’s never given up. Krass by name and crass by nature, these two were foul-mouthed and snarky enough for me to latch right onto.

Things wrapped up in an entertaining way, leaving me satisfied with the conclusion, but the hope that, perhaps one day, something else in this world will come forth. There’s room for more, under different circumstances perhaps, but room for more nonetheless!

All told, this was a very entertaining world to read about, with the idea of being bound as a ghost and a slave after death really, really well thought out and well executed. I had a great time with this series, and this final book was no exception!

Thanks to the author for the review copy!
Read more
3 people found this helpful
Helpful
Report abuse
See all reviews

Frase80
5.0 out of 5 stars Bloody good read!
Reviewed in the United Kingdom on March 17, 2019
Verified Purchase
I absolutely loved this trilogy, fantastic storytelling and with an antihero that you can't help love whilst simultaneously face-palming by the end of the very first chapter, and also loads of material for a few more tales... Please?!
Read more
Report abuse

M. King
3.0 out of 5 stars Overall a good inventive story
Reviewed in the United Kingdom on April 13, 2019
Verified Purchase
Lots to like with the world building and characters.

My main criticism is that people dragged their feet plot wise over the 3 books and at most, it’s a two book story.

ian fairbrass
5.0 out of 5 stars Spooky
Reviewed in the United Kingdom on October 7, 2019
Verified Purchase
I read all three one after the other. Absolutely the definition of I couldn't put it down. I have every intention of reading all his other books
Read more
Report abuse

zoe bevan
5.0 out of 5 stars Sucker for world building.
Reviewed in the United Kingdom on April 6, 2019
Verified Purchase
Bit disappointed with the ending of this series, mainly because I didn't want to put it down! Loved the characters, the places and the politics of the world. Would happily read more based on this premise or involving these characters.
Read more
Report abuse

loopyhuk
5.0 out of 5 stars Great Trilogy
Reviewed in the United Kingdom on May 21, 2019
Verified Purchase
Really enjoyed this trilogy and didn't want it to end. What a rich and engaging world Ben has created and I hope he continues to build further stories around it. So many new avenues to explore.
Read more
Report abuse
See all reviews