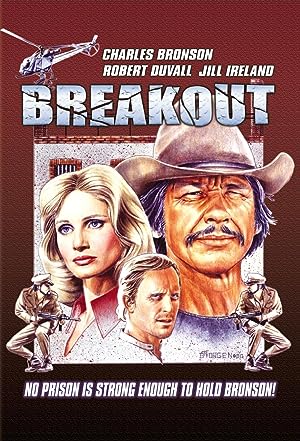 Quiet KnightReviewed in the United States on April 26, 2022
5.0 out of 5 stars
Breakout Breaks into Blu-Ray
Verified purchase
Kino Lorber Studio Classics releases this 1975 action film based on fact and starring Charles Bronson as a private pilot hired by a woman (played by Jill Ireland) to breakout her husband (played by Robert Duvall) out of a Mexican prison after being framed for murder. Looking quite good in HD, a noticeable upgrade from the 2002 Columbia Pictures DVD, now containing extras like TV and Radio spots, theatrical trailer, other trailers for Bronson titles, and an audio commentary by Film Historian Paul Talbot, author of two books about Charles Bronson. Comes with a slipcover.
One person found this helpful

curtis martinReviewed in the United States on February 2, 2022
4.0 out of 5 stars
One of my favorite Bronson films
Verified purchase
We went to see this AS A FAMILY when it played the theaters back in the day, and it remains a favorite. It's classic 70s drive in stuff. If Death Wish hadn't hit so big, I think Bronson would have done more of these action-comedies Instead, Burt Reynolds filled that need in the market. This is really one of Bronson's liveliest performances.
The only reason I give it only 4 stars instead of five are for a couple of anti-mexican slurs (though the villains are really a white billionaire and white CIA agents) and casual jokes about rape (which, even though made by a female character, weren't funny then or now.)

Daniel ThomasReviewed in the United States on September 30, 2021
2.0 out of 5 stars
"We should all be so lucky."
Verified purchase
Breakout is a lesser Charles Bronson vehicle (I like Hard Times, The Mechanic, and Telefon to one degree or another). It is dry and pretty humorless. The prison breakout scene I found preposterous. For one thing, why didn't one of the scores of Mexican prisoners try climbing on the helicopter. Of course the police/prison guards are all abysmal shots. The ending is incomplete in some aspects too. I would probably have given this movie one star, but I like what happens to one character at a Texas airport. Oh and Randy Quaid in drag. 1.75 of 5 stars.

Ree ViewReviewed in the United States on August 9, 2020
2.0 out of 5 stars
Bronson's screen presence can't save this
Verified purchase
Breakout is a 1975 action film about a woman (Jill Ireland) hiring a pilot (Charles Bronson) to free her framed husband (Robert Duvall) from a Mexican prison. Bronson is good in flashes as pilot Nick Colton (in a more comedic role than normal) but the movie is a laborious watch that has too few rewards to merit the time, even for just wanting to relax with an action movie.
One person found this helpful

Ian M.Reviewed in the United States on August 29, 2019
4.0 out of 5 stars
one of Charlie's best
Verified purchase
Although a rather refined entry in his movie canon, Bronson fans will not be disappointed by this production, even if the ending is something of a letdown-spoiler alert!
One person found this helpful

Beantown JimReviewed in the United States on May 22, 2010
4.0 out of 5 stars
Drama, but fun too
Verified purchase
There are few dramas that are so much fun; few comedies that have such a taut plot. This film was just a great outing for Charles Bronson and Jill Ireland. Robert Duvall is miscast and underutilized as the victim of a conspiracy to falsely imprison an American in Mexico. Bronson is hired to get him out. Oddly enough, this unlikely scenario actually was a true story; odder still is the fact that Mexican law never considered this scenario and, thus, had no law prohibiting someone from rescuing someone from such a jail.
If you are a Bronson fan, you will defintely want this disk; it is funny, sexy, and a taut thriller, rolled into one. If you are a Robert Duvall fan, you should seek other movies, as he was only a very minor player in the overall plot.
6 people found this helpful

Joe SmartReviewed in the United States on April 1, 2015
3.0 out of 5 stars
Above Average 1970's Bronson
Verified purchase
Robert Duvall's Jay Wagner is set up by his own father-in-law (John Huston, automatic movie shorthand for evil after Chinatown) because of some damaging information he has about the family business and framed for murder in Mexico. To give you a quick idea of how corrupt the Mexican justice system is Duvall's lawyer proves beyond a doubt that his client was somewhere else when the murder was committed but the judge finds him guilty anyway.

Jay's wife Ann (the inevitable Jill Ireland) is trying to come up with a plan to help her husband escape from custody but doesn't realize things keep going wrong because the man who is helping her works for her father-in-law who doesn't want any escape plans to succeed. Then she stumbles across a shifty pilot named Nick Colton (Bronson) who promises to do the job for no money up front--and who is also suspicious enough not to reveal the specifics of his plan until the last minute.

If you're a Bronson fan Breakout has a lot going for it. It's not directed by Michael Winner or J. Lee Thompson which immediately represents a big plus. Charles Bronson was at least as good of an actor as Clint Eastwood, probably better, but Eastwood was much smarter, producing and directing his own projects while Bronson worked strictly as an actor for hire. The two things that hurt Charles Bronson's career were that he too frequently worked with Michael Winner or J Lee Thompson and that he almost always gave wife Jill Ireland the lead role in his films. Jill Ireland likely wouldn't have had any acting career at all if not for her too loyal husband--more often than not she was a terrible lead. Breakout actually features one of her more effective performances.

The script allows Bronson to have a bit more fun than usual--this time out he's not a grim vigilante or renegade cop--he's a pilot running various scams to try and stay afloat. Bronson's Colton wants to rescue Wagner from that Mexican prison mainly because nobody believes he can do it. The plan he comes up with is not only daring but also largely avoids violence and bloodshed which definitely makes this a different kind of Bronson film.

Breakout takes some unfortunate shortcuts storytelling wise. We never find out exactly what it was that Robert Duvall's character found out that earned him the murder frame in the first place. The movie also glosses over what happens to him after the escape--his father-in-law is the one who set him up so it's not like his troubles are over after Bronson gets him out.

Breakout still qualifies as an unusually light and fun Bronson film. Randy Quaid provides the buddy comedy; Jill Ireland isn't terrible and Robert Duvall generates some actual drama as you see him deteriorate physically and lose hope. Tom Gries who directed another above average Bronson vehicle, Breakheart Pass, does a nice job with his actors and the action--it's a shame he and Bronson didn't get more opportunities to work together but Gries died just two years after Breakout was made. Considering how much better Breakout and Breakheart Pass are than the J Lee Thompson vehicles (Thompson directed St. Ives and The White Buffalo in roughly the same period) it's not hard to suppose that a lot of Bronson's 1980's films at Cannon might have turned out better with Tom Gries behind the camera instead of the perpetually uninspired J Lee Thompson whose direction usually turns movie watching into a chore.

By my count Charles Bronson made 9 films with J Lee Thompson and 6 with Michael Winner while making only one film each with the far more talented Don Siegel and Walter Hill. How much better might Charles Bronson's movie career have been if he had simply worked with better directors more often and not given wife Jill Ireland lead roles that she was generally ill-equipped to play?

Breakout isn't likely to have much appeal for people who aren't already fans but if you like Charles Bronson it definitely beats watching Love and Bullets and The Evil That Men Do and the seemingly never-ending Death Wish sequels.


7 people found this helpful
See all reviews
Back to top
Get to Know Us
Make Money with Us
Amazon Payment Products
Let Us Help You
EnglishChoose a language for shopping. United StatesChoose a country/region for shopping.
© 1996-2022, Amazon.com, Inc. or its affiliates