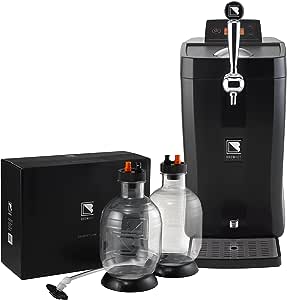 Visit the BrewArt Store
4.3 out of 5 stars 45 ratings
Available from these sellers.

Easy to use Kegging Pack

The BrewArt kegging pack comes with your BrewFlo and will make the kegging process simpler. You will keg your beer from the BeerDroid into disposal keg liners that fit inside the 5 liter kegs. The keg liners are pre-sanitized and disposable reducing the need for extra cleaning before and after kegging your beer. The kegging pack will include enough liners and beer lines for 2 batches of beer.

The unique BrewFlo system does not use C02 to dispense your beer, making this system safe to use and fuss free. Each BrewArt keg is naturally carbonated during the first 2 weeks after kegging your beer. When dispensing your beer the BrewFlo with its quite yet powerful compressor will use counter pressure to dispense your beer. It will pressurize the space between the keg wall and the outside of the keg liner naturally forcing the beer out. This unique pouring system is designed to offer the perfect pour every time.

With the uniquely designed BrewArt Kegging system your beer will last longer. Kegging directly from the BeerDroid into the BrewArt kegs prevents oxygen from coming in contact with your beer preventing off flavors. This unique closed system will allow your beer to sit longer in the kegs without getting any off flavors over time. This will also allow to change out kegs in your BrewFlo without having to finish the beer you have in there.

Dispenses BrewArt 5 liter (1.3 gallon) kegs without the need for CO2. Temperature control allows you to set the desired serving temperature and pour a great tasting beer with a rich frothy head pour after pour. Disposable keg liners and beer lines for a fresh clean start every brew with minimal cleaning. This item only runs on 110V electrical outlets.

4.3 out of 5 stars
4.3 out of 5
45 global ratings
How are ratings calculated?
To calculate the overall star rating and percentage breakdown by star, we don’t use a simple average. Instead, our system considers things like how recent a review is and if the reviewer bought the item on Amazon. It also analyzes reviews to verify trustworthiness.

I’ve been a home brewer for 30+ years, on and off. Mostly “off” recently as It’s hard to find the time:
1 or 2 hours for planning and purchasing a partial mash recipe at a local brew store
5 or so hours of alone time without my spouse in the kitchen to cook the recipe and clean up afterwards.
1 or 2 hours after brewing complete to bottle and/or keg the brew

While I really enjoy being able to share the finished product with family and friends (and drink some myself), it’s too hard to find the time every month or so to make a new batch.

I’m changing to BrewArt as it is much less time consuming, as well as reviews showing it makes really good beer. It’s proving to be a real timesaver to get me excited about brewing again. The trade-off: I’m giving up control over things like recipes and ingredients, as BrewArt has designed a “walled garden” system for brewing.

The BrewArt solution consists of:
The BeerDroid, a temperature/app controlled fermenter for 10 liters of beer
BrewPrints, complete kits for 45+ different types of beer for use with the Beerdroid
BrewArt’s complete kegging pack, each keg holds 5 liters of beer. (BrewArt also sells bottles and a filling tube for bottling beer.)
The BrewFlo, for dispensing beer kegs
The BrewArt app
The BrewArt website and support, which I’ve found to be very responsive. The BrewArt site also provides a community for sharing experiences.

The initial outlay for the BeerDroid is expensive, but my guess is I’ve spent near that amount over the years in a never-ending quest to try to control the beer making process (can anyone say “wort chiller”?).

The BeerDroid provides control over the process, plus I’ll finally be able to try some lagers, which require a controlled temperature for fermentation that is lower than the room temperature allowable for ales.

My first impressions of the Beerdroid, Brewprint, and the BrewArt App out of the box:
I had to do some quick assembly by inserting the tap, then another 15 minutes to install the Brewart app and hook the Brewdroid to my wifi system. The setup went smoothly and my Brewdroid gained a name through this process: “Beery White”.
The Brewart app’s “101” section extremely useful -- it consists of many short videos every aspect of setup,sterilization, brewing, kegging, and even pouring the brew. I used these videos almost exclusively to guide my efforts. An Australian narrator was a nice touch!
After sanitizing the keg by filling it with water, popping in a sanitizing tablet (supplied) and waiting an hour, I was ready to brew.

Now the big difference, instead of the 5 hour brewing time mentioned above, I spent maybe 15 minutes starting the brew for a “Spoke Amber Ale” Brewprint. All I did was fill the BrewDroid with water, open the various packets of ingredients, and gently pour on top - no need to stir. In the BrewArt app I selected “Spoke” and started brewing!

The Brewart app alerted me to the progress of the beer, starting with “propagation”, then detecting “fermentation” starting. When Beery White detected the fermentation was complete, it alert me that it was ready to keg. This was about 5 days.

Next step, kegging. This is a fairly straightforward process:
sanitizing tubes, connectors, and keg caps by disassembling, placing in a pan with water, adding another sanitizing tablet, and waiting 1 hour.
inserting disposable liners into plastic keg jars
adding hop extracts and keg primer (sucrose) from the Spoke Brewprint,
then dispensing beer from the Beerdroid into the kegs
The app brewing 101 videos directed me through this process

I encountered a problem during sterilization of the kegging equipment. When dumping out the sterilization water, I must have lost 2 of 4 small poppets used for the keg cap assemblies. In the future I need to have a list of items to check for when laying everything out to dry, before dumping the water down the sink.

BrewArt support came back quickly and said they’d send me replacement poppets at no charge.

I didn’t want to wait for the replacement poppets, though I could have. The BrewDroid has a “storage” mode, which cools the beer wort until ready to keg, then can warm it up again to the proper kegging temperature.

With only 2 of the poppets, I could fill one keg of beer, and decided to bottle the rest. This will allow me to compare bottled vs. kegged, as well as providing beer that I can give to family and friends for their opinion as well.

Conclusion: This is a really good product and I’m excited to be brewing again. I’ll be choosing some more BrewPrints (from a selection of 45+) to try. As long as the beer is really good, I’ll be happy, even though the “walled garden” is counter to what I’ve done for years as a home brewer.

Mike in St. Paul, MN
5.0 out of 5 stars Great system, easy to use, can't wait to brew again!
Reviewed in the United States on April 24, 2018
Style Name: BeerDroidVerified Purchase
After a week or so of waiting, I finally got the opportunity to unbox and set up my BeerDroid. It's an attractive machine and the quality feels good. I didn't know what to expect, but I was satisfied even as my wife gently teased me for having a "brewing computer". After watching the videos, I set about sanitizing / sterilizing it, which was very simple. I also set up the BeerDroid on my wireless network, making sure it was up to date and connecting to it using a mobile app. Before filling, I set up the BeerDroid in a good place for it to brew over the next week.

I also purchased the BrewFlo system, and the kegging went pretty smoothly. I was not fully comfortable going through it the first time, but it was actually pretty easy and I'm confident I'll never mess it up again. (Make sure the filler is tightly screwed onto the bag in your 5L keg! I was sheepish because I didn't want to break it, and made a little mess the first time.)

I thought a bit about price, cost, value, etc. as I was brewing, and my thoughts are this:
- Yup, it's expensive.
- It's also really easy to use, and attractive. I've brewed in the past using other kits, and buckets / jugs / bottles, and haven't in years. Why? Space and time. Advantage to the BeerDroid on this - the whole system takes up minimal space, actually looks nice, and there's no tinkering required.
- If you are a hardcore brewer who wants to tinker with and "dial in" every recipe, this probably isn't the system for you.
- If you like to make beer, have something fun to talk about while drinking it, and minimal hassle, this system cranks it out at about $1.60 per pint (and I expect the beer to be good).

I'm looking forward to trying the beer, but still a week+ away from it being ready. I'll post a review of the BrewFlo once I get my first keg tapped!

The only question now is, what beer do I brew next???
Read more

Page 1 of 1 Start overPage 1 of 1
This shopping feature will continue to load items when the Enter key is pressed. In order to navigate out of this carousel please use your heading shortcut key to navigate to the next or previous heading.
Back
Next
Pages with related products. See and discover other items: Best beer dispenser for home, Explore Home Brewing Starter Sets