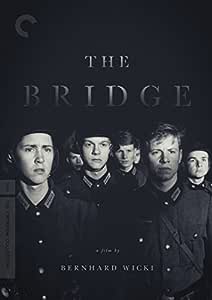 The astonishing The Bridge, by Bernhard Wicki (The Longest Day), was the first major antiwar film to come out of Germany after World War II, as well as the nation’s first postwar film to be widely shown internationally, even securing an Oscar nomination. Set near the end of the war, it follows a group of teenage boys in a small town as they contend with everyday matters like school, girls, and parents, before enlisting as soldiers and being forced to defend their home turf in a confused, terrifying battle. This expressively shot, emotionally bruising drama dared to humanize young German soldiers at a historically tender moment, and proved influential for the coming generation of New German Cinema auteurs.

4.6 out of 5 stars
4.6 out of 5
124 global ratings
How are ratings calculated?
To calculate the overall star rating and percentage breakdown by star, we don’t use a simple average. Instead, our system considers things like how recent a review is and if the reviewer bought the item on Amazon. It also analyzes reviews to verify trustworthiness.

Gary W. Phelps
5.0 out of 5 stars The Bridge.
Reviewed in the United States on October 20, 2015
Verified Purchase
In 1959, as a young 1st Class Boy Scout, at an Air Base I met a Boy Scout from West Germany who told me about the Jugend in WW II. Then on WSYR-TV in Syracuse, New York, I watched an English version of this movie, Die Brucke (German: The Bridge). Now, as a former USAF Officer, I was pleased to acquire this original for my DVD collection. Today, many are under the misguided notion the Nazi Jugend (Youth) of Germany died in a state of unquestioning obedience to the Fuhrer. That is a myth. Bernhard Wicki's production revealed the antiwar sentiment of Germans after the War. The film portrayed the true life circumstances of teenage boys and girls in a small town. Then they were forced to defend their homes and town in a confused battle of injury and death. Young German Soldiers were expressing humanized emotions at an actual historical moment in a battle that should never have happened. American Soldiers pleaded with the teenagers in German uniform to just go home; the war was lost. The real value of this movie is the contents are presented from a German point of view. It was nominated for an Oscar. The teenage actors were superb to present what the real tragedies were at the closing days of WW II and the rise of a new mentality in Germany as it returned to the culture of the West again.
Read more
21 people found this helpful
Helpful
Report abuse

Wicingas
5.0 out of 5 stars Powerful story
Reviewed in the United States on February 19, 2018
Verified Purchase
This is one of the finest "waste of war" movies ever made. Directing, acting and script are superb. Most of the movie is the lead up to the final clash. We see the boys in school and acting like teenagers. They deal with love, family problems, food shortages, boyish quarrels and school. They are naïve and have delusions of grandeur that have been beaten into them as they grew up during the war. There school teacher is cynical but has to walk the party line with his lectures. During one moment in class, a boy who likes trains is talking about becoming a hero. His teachers comments that the war is coming to an end and Germany will need train engineers more than they need heroes. The little village is tired. The boys are surrounded by adults who are worn down by the war, loss and shortages of everything. When they receive their draft notices, they are elated. They are going to defend their homeland. One mother tries to have her son arrested for stealing in hopes that he will survive the war, but the police won't do it. The school teacher pleads with their company commander to leave them out of the fighting but is rebuked. The boys go to war. They have one day of training when their company is ordered to the front. Their company commander has second thoughts and gets permission to assign the boys to guard their village bridge. It is not an important bridge and is due for demolition anyway. He thinks he has spared them. First night, their NCO goes into the village to confer with the engineers who are assigned with blowing up the bridge. He runs afoul of military police. He has no written orders. He is gunned down while trying to avoid arrest for desertion. Now, we have untrained, teen aged boys armed with machine guns and panzerfausts thinking they are the holding the most important bridge in Germany--with no adult supervision. The night is filled with badly mauled German troops retreating across their bridge. They don't understand what is happening. They think the soldiers are cowards. They become more determined to hold their insignificant bridge. The next day, when American patrols arrive the boys open fire. In a the day's skirmishes, young are lives thrown away for no purpose.
Read more
5 people found this helpful
Helpful
Report abuse

timcon1964
VINE VOICE
5.0 out of 5 stars Teenage Soldiers In the Last Days of the Third Reich
Reviewed in the United States on December 9, 2015
Verified Purchase
It is April 1945, the final weeks of the Third Reich, and the small town of Bad Tölz in southern Germany, midway between Munich and Innsbruck, is bracing for an attack by the American army. Bad Tölz is divided into western and eastern sections by the River Isar, which is spanned by a narrow bridge. Although German army officers plan to demolish the bridge soon to impede the American advance, seven 16-year-old German boys are sent to defend it—at first, their commanders expect that the boys will go home before the fighting starts; later, the officers intend that the boys will offer token resistance (forcing the Americans to bring up reinforcements), and then retire so a German demolition team can blow up the bridge before the American reinforcements arrive. Most of the adults—whether parents, teachers, or army officers—are surprised when the 16 year olds are drafted, and are convinced that these youths are putting their lives at risk for no purpose. But the boys themselves have grown up under the Nazi regime and absorbed its values. To them, military duties offer a chance to show their courage and to follow orders. At first, it is still like a game—one boy suggests using as an observation post a “fort” they had used when playing cowboys and Indians. But, when the firing starts, they discover that it is not a game.

This film is based on a novel of the same name (

The Bridge ), which was derived from author Gregor Dorfmeister's (penname Manfred Gregor) actual experiences during the war. Dorfmeister begins the story when the boys are already in the army, and employs a dozen flashbacks to provide personal information about each of the boys and some of the army officers. Wrestling with this unwieldy framework, Dorfmeister wrote and re-wrote the novel seven times before submitting it to the publisher. Understandably, director Bernhard Wicki considered this format inappropriate for the movie, and chose instead to tell the story more or less chronologically. This required him to omit many details, and to foreshorten time, placing in several days events that actually took place over several years. For example, in the film, the boys were in the army for only a single day; in the novel, they had 14 days’ military training.

Each of the seven boys has a distinctive personality—some are more mature than others. The movie gives us a good understanding of some of the boys—Jürgen’s desire to be an army officer, Walter’s resentment of his Nazi father—but it fails to capture the character of Hans Scholten (who is Ernst Scholten in the novel). This is unfortunate, because Scholten, as the most mature, the most outspoken, and perhaps the most sensitive of the group, may be the most important character in the story. In the book, Scholten is an outsider. He loves music, plays the flute, consistently avoids Hitler Youth meetings, and has once been arrested for vandalism. More than the other boys he resents military regimentation; and he is the only one who dares to talk back to army officers. His only motive for fighting the Americans is avenging the death of one of the other boys. Even so, he does not hate all Americans; and when one GI pleads with the boys to go home, Scholten feels a grudging admiration for him, and avoids shooting him. But Karl, one of the other boys, shoots the American, and Scholten is furious that the “stupid ass” had shot him. When Lieutenant Hampel, who has come to demolish the bridge, tells Scholten to convey the General’s compliments to the other boys, Scholten, his eyes “burning with hatred,” waves his arm at the battle scene, where five of his friends lie dead, and tells Hampel, “There they are, Herr Leutnant, waiting—for the General’s compliments!” If you get a chance, read the book—Dorfmeister has packed a great deal of emotion into its 140 pages.

“The Bridge” was shot with black and white film. This gives it the appearance of a World War II era newsreel. The dialogue is in German, with English subtitles. In some respects, “The Bridge” is not very realistic. It is highly improbable that a small squad of seven teenagers would be equipped with two machine guns, multiple panzerfaust anti-tank weapons and liberal amounts of ammunition—especially if they were not originally expected to do any serious fighting. When “The Bridge” was filmed, the German army did not have large battle tanks. And U.S. Army officers, reading in the script how American tanks were to be shot up by German teenagers, declined to provide American tanks for the movie. So Wicki had to employ dummy tanks. But these technical discrepancies do not reduce the dramatic impact of the story.

Milou
5.0 out of 5 stars Powerful but tragic testimony to youth total dedication to a cause
Reviewed in Canada on October 7, 2016
Verified Purchase
ABSOLUTELY A "MUST" TO SEE! TRAGIC AND BREATH-TAKING, BUT SADLY REALISTIC AND HISTORICALLY-AUTHENTIC BASED STORY OF THE POWERFUL DEDICATION, ALBEIT BLINDLY ORIENTED, OF YOUTH (NAMELY, INFAMOUS "HITLERJUNGEN"). IT IS ALL THE MORE SAD AND TRAGIC STORY THAT IT BELONGS TO THE COMPLETELY FORGOTTEN EVENT AMIDST THE FEW LAST MONTHS OF SECOND WORLD WAR.
Read more
One person found this helpful
Report abuse

Robert R. Smale
5.0 out of 5 stars The Bridge is A Classic Anti-war Film
Reviewed in Canada on March 8, 2017
Verified Purchase
This is a classic anti war film told from the German perspective. Very well done. Deals with the futility of war and how the most vulnerable victims of conflict tend to be the young.
Read more
One person found this helpful
Report abuse

Ryan O'Keeffe
5.0 out of 5 stars Excellent Movie, anyone who has never seen a war movie should watch this first before many others.
Reviewed in Canada on August 27, 2020
Verified Purchase
attention to detail and a very compelling story. If you watch war movies and have never seen this movie, you don't really watch war movies. Great flick.
Read more
Report abuse

doug zdanivsky
1.0 out of 5 stars bought on a whim..
Reviewed in Canada on November 29, 2018
Verified Purchase
It's... of its time. Not a classic by any stretch.
Read more
Report abuse
See all reviews

Page 1 of 1 Start overPage 1 of 1
Previous page
Next page
Pages with related products. See and discover other items: criterion movie