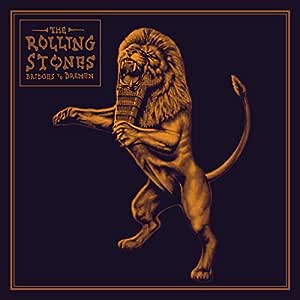 Format: DVD
4.6 out of 5 stars 99 ratings
Available at a lower price from other sellers that may not offer free Prime shipping.

Bridges To Bremen is a full-length show performed by the Stones on the fifth and final leg of the Bridges To Babylon Tour. Filmed at the German city's Weserstadion on September 2, 1998, the band had by then completed four legs in the stadiums and arenas of North America (twice), Asia and South America before finally landing in Europe early that summer. Ever the innovators, Bridges To Babylon was a tour of firsts - the first time the band went on the road with a permanent B-stage, and also the first time where fans could vote on the band's website for a track they wanted to hear at the show - Memory Motel in the case of the Bremen fans. This concert film has been meticulously restored from the original masters, and the audio remixed and remastered from the live multitrack recordings. Four tracks from their Soldier Field performances in Chicago are included as bonus features.

4.6 out of 5 stars
4.6 out of 5
99 global ratings
How are ratings calculated?
To calculate the overall star rating and percentage breakdown by star, we don’t use a simple average. Instead, our system considers things like how recent a review is and if the reviewer bought the item on Amazon. It also analyzes reviews to verify trustworthiness.
Top reviews

Big Miles Davis Fan
VINE VOICE
4.0 out of 5 stars Bridges to Bremen – (blue ray disk): delightful
Reviewed in the United States on August 26, 2019
Verified Purchase
Like the Bridges to Babylon concert video the Bridges to Bremen video was captured during the Rolling Stones’ 1998 concert tour. Both video releases contain twenty-two songs performed delightfully before adoring crowds. The song list however is not identical. Songs “Any body seen my baby”, “Wild horses”, “Memory motel”, “Thief in the night” and “You got me rocking” are found on one but not the other disk. That should inform your purchase decision if you want one only of the two concert disks.

The “Babylon” video disk is not yet out in blue ray. The DVD release is lacking in both audio (no DTS) and video quality. The “Bremen” disk in blue ray is excellent in both regards but offers the concert in the original 4:3 aspect ratio only with no widescreen option. So, this will play on your large HDTV screen with two black side bars. Enjoy!

Terry Bell
3.0 out of 5 stars More Seizure causing camera angle changes, people with Epilepsy beware
Reviewed in the United States on August 20, 2019
Verified Purchase
I give it 3 stars because of the black barred picture I don’t understand why they don’t make these films full screen. The headache causing camera angle changes is super annoying , the song content is great and the sound quality is good. Thus the 3 star rating.
Read more
2 people found this helpful
Helpful
Comment Report abuse

Amazon Customer
5.0 out of 5 stars This concert is superb, must have!!!!
Reviewed in the United States on September 18, 2019
Verified Purchase
This concert is incredible from start to finish. It's a must for any Rolling Stones fan. Like all the film's from the greatest rock and roll band in the world, the sound and video is superb. I highly recommend this one!!!!!!
Read more
One person found this helpful
Helpful
Comment Report abuse

Ninja Reviewer
2.0 out of 5 stars Caution will cause motion sickness. Director should be banned from all future filmings.
Reviewed in the United States on December 28, 2019
Verified Purchase
Music is great. The video effects detract from the experience. Buy used and save as you probably won't be able to stand watching uncountable screen effects that will make you motion sick.
Read more
One person found this helpful
Helpful
Comment Report abuse
See all reviews

mike
5.0 out of 5 stars One of the best concerts they have released.
Reviewed in the United Kingdom on June 25, 2019
Verified Purchase
I have many Rolling Stones concerts on dvd and blue ray. This is one of the best. Fantastic quality in vision and sound. Faultless.
Read more
3 people found this helpful
Report abuse

TC
5.0 out of 5 stars Brilliant
Reviewed in the United Kingdom on February 10, 2020
Verified Purchase
I had to wait a long, long time to see the Stones perform live - at the No Filter even at Southampton. I was amazed by the quality of the show - way, way above expectations in every respect and I wanted something akin to what I had seen. This is a brilliant concert and totally absorbing. If you are a Stones fan you won't be disappointed by this DVD.
Read more
Report abuse

Jilly
5.0 out of 5 stars Good
Reviewed in the United Kingdom on October 10, 2019
Verified Purchase
Bought for a friend. They say it’s a good dvd & good sound quality. They like very much.
Read more
Report abuse

James Norris
5.0 out of 5 stars Music
Reviewed in the United Kingdom on August 7, 2020
Verified Purchase
They are good band
Read more
Report abuse

Amazon Customer
5.0 out of 5 stars Brilliant
Reviewed in the United Kingdom on January 2, 2020
Verified Purchase
Everything is ok
Read more
Report abuse
See all reviews