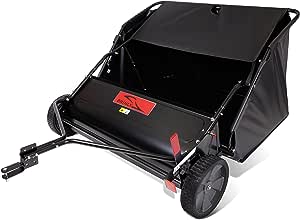 Visit the Brinly Store
3.9 out of 5 stars 326 ratings
Available from these sellers.

Allowing fallen leaves to lie on your lawn not only damages grass and impedes growth, but also contributes to thatch buildup and can cause bare spots in your lawn. Raking large areas is an inefficient and exhausting task; one that must be done repeatedly throughout the autumn season. If you’re fed up with raking and ready to enjoy beautiful fall weekends without the hard labor, consider a Brinly 42″ Tow-Behind Lawn Sweeper.

The Brinly high-performance sweeper is the ideal tool for sweeping up leaves, pine needles, grass clippings and old grass (thatch) after dethatching. Our durable fabric hamper has the capacity to hold and haul 20 cu. ft. of lawn material and can be emptied right from the seat of your tractor using the included pull-rope with ergonomic t-handle. Six high-velocity brushes rotate to pick up material continuously, even during tractor turns. A high brush-to-wheel ratio and the easily adjustable brush-to-ground contact minimizes skipping and provides maximum performance. And when the project is complete, simply collapse the sweeper into its upright position for quick and easy storage.

We back up the engeenering and craftsmanship of our lawn sweeper with a two year warranty. Be sure to register your new sweeper by mail or on our website.

Homemade in the Heartland

Brinly products are made by Brinly-Hardy Company, an American corporation located in Jeffersonville, Indiana.

Raking leaves can be a big job and one that must be done multiple times in a fall season and fallen leaves and other yard debris can lead to thatch build up if not removed. The Brinley lawn sweeper with its large 42 inch working width and 20 cubic foot hamper helps get your fall yard clean up done quickly and easily. The sweeper can be conveniently emptied from the seat of the tractor and can be stored upright to take up less space in a garage or shed.

3.9 out of 5 stars
3.9 out of 5
326 global ratings
How are ratings calculated?
To calculate the overall star rating and percentage breakdown by star, we don’t use a simple average. Instead, our system considers things like how recent a review is and if the reviewer bought the item on Amazon. It also analyzes reviews to verify trustworthiness.

Kevin Hartnett
3.0 out of 5 stars Sweeps well, but some component problems.
Reviewed in the United States on May 30, 2015
Verified Purchase
I bought this sweeper on April 26, 2014. I use it to pick up grass clippings from roughly 1.5 acres of grass that I mow. I typically have to dump it into my pickup truck 7 or 8 times to make a complete sweep of my lawn. I then haul the clippings to my local "brush dump."

The carton arrived within a few days of my order and was undamaged. Assembly was about two hours, but I was in no hurry. Everything went together pretty well. I made a couple of test passes and adjusted the brush height a couple of times before I was happy with the rate of pick up.

All in all, it does a good to very good job picking up grass clippings. I'd estimate it gets 65 to 75 percent of the grass, which is acceptable. I'm inclined to give it a five-star rating, except for...

...the bad news. After a month or so of use, once or twice a week, the brush height adjusting knob fell off, never to be found again. Off to Home Depot to get a replacement. The knob and bolt I got from HD actually does a better job than the original. I now check the knob before every use and find I occasionally have to snug it up.

But wait there's more. Last week, on May 18, 2015, the sweeper abruptly stopped picking up the grass. I couldn't see any external reason - nothing tangled in the brushes, the wheels were turning. Hmmm. I took of the left wheel and found two broken teeth in the inner ring gear. Off to brinly.com to order a replacement: $28.33 for the wheel, $17.17 for shipping. It arrived about a week later; I put it on the sweeper and BAM, the brushes still did not turn. I disassembled both wheels and removed the pinion gears. The pinion gears have an interesting design. Externally they look like a simple gear, but underneath there is a spiral shaped bore and a floating pin on each end of the brush axel that, in concert, act as a sort of differential. When making a sharp turn, one wheel may not turn at all, but the outer wheel still turns keeping the brushes spinning. A clever design except for one small problem. The little step in the spiral bore that catches the floating pin wears down until eventually it never catches the pin and the brushes stop turning. After figuring this out, I ordered two replacement pinions, a left and a right (they are different.) $3.67 each for the gears and $14.88 for the shipping. Total weight: about half a pound. Once I received and installed the new pinion gears a week later, HOORAY, the brushes are spinning again!

Brinly only has a 90 day warranty on parts. The pinion gear failures (both gears were worn out) occurred at the one year mark. I expect I will be replacing the pinion gears regularly, but since I'm already invested in the sweeper, I'll probably put up with it. One last complaint: Brinly's shipping costs are outrageous, e.g. $14.88 to ship a six to eight ounce package by FedEx is abusive, in my opinion, as is $17.17 to ship one wheel that weighs 2 to 3 pounds.

I like the job the sweeper does picking up the grass; I'm disappointed in the level of material workmanship. Shipping for parts is a ripoff. Only three stars.

Allan
5.0 out of 5 stars I am very happy with this leaf sweeper
Reviewed in the United States on December 1, 2015
Verified Purchase
I am very happy with this leaf sweeper. It works well on my 1 acre lot with a lot steep inclines, many trees, and rough terrain. I actually ran the mower over the leafs and let the sweeper pick up the chopped up leafs and grass clippings and small branches. It worked fine and significantly reduced the volume of the litter to be collected.
The assembly is a bit of a task. It took me about two hours, but I was working outside at night and did not have very good lighting. The directions supplied consist of a series of diagrams, each with a sentence or two specifying the step to be performed. The parts come on a large blister pack with all of the parts for each diagram segregated and clearly labeled. I did not find any part of the instructions to be incorrect, misleading, or missing. You really do need to take the time to look at the diagram and read directions, though. There are no extra words there so don't skip over any part of it. There is also a you tube video that the company has put out on the assembly process so you can watch someone perform each step before you start it.
Read more
17 people found this helpful
Helpful
Report abuse

Dennis L. Allen
5.0 out of 5 stars Does the job well
Reviewed in the United States on June 16, 2017
Verified Purchase
This sweeper does the job well. As some have pointed out, the assembly instructions were written, by all appearances, by someone who hadn't actually done the assembly, or else didn't remember what he did. Some steps are backwards, so take the instructions with a grain of salt, sea salt if you are particular. Time will tell how long the unit lasts. That's why I am not eager to review purchases immediately. If I have problems I will update. I use equipment with an eye to longevity, so it should last for some time. I don't see any inherent problems with the design of the machine. This is the first lawn sweeper I've owned, so I can't compare it to others on the market. I used it to sweep up a dozen loads of clippings from our rental house lawn. Heavy windrowing doesn't seem to bother the unit. In fact mowing to windrow the grass will reduce your sweeping time. Gardeners should be prepared to make compost out of the grass, because it heaps up quickly.
Read more
7 people found this helpful
Helpful
Report abuse

Birdy529
5.0 out of 5 stars but otherwise perfect. I was worried that it wouldn't pick up ...
Reviewed in the United States on November 6, 2016
Verified Purchase
Please keep in mind this is after using once so I'm not sure of the longevity of the product yet... but wow!!! It fills up very fast!!! Wish I would have gotten a bigger one! We have a large property and we tried leaf blowing it last year. There is no way I would have wanted to rake all of this as it would have taken forever. After leaf blowing it, the leaves were all back in our yard the next day. It was frustrating! So this year we wanted to try something else. We purchased this, I put it together myself in about an hour using both the instructions and a video you can find online and it was realitevly simple. There is one part you need someone strong to put tension rods in and my husband did that and there was one part where the holes didn't line up wel enough to put in the connectors when connecting the bagging part to the roller part (very technical terms) so I used bolts instead, but otherwise perfect. I was worried that it wouldn't pick up the wet leaves but it did!!! Just had to dump it a lot. Would recommend!!!
Read more
8 people found this helpful
Helpful
Report abuse
See all reviews