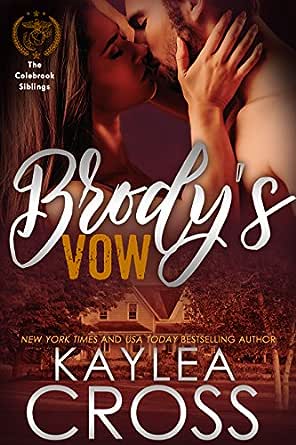 You've subscribed to Colebrook Siblings Trilogy! We will preorder your items within 24 hours of when they become available. When new books are released, we'll charge your default payment method for the lowest price available during the pre-order period.
Update your device or payment method, cancel individual pre-orders or your subscription at
Your Memberships & Subscriptions
There was an error. We were unable to process your subscription due to an error. Please refresh and try again. 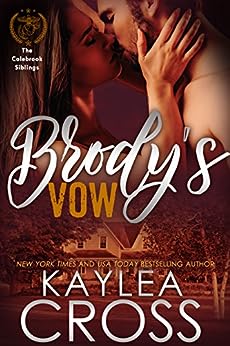 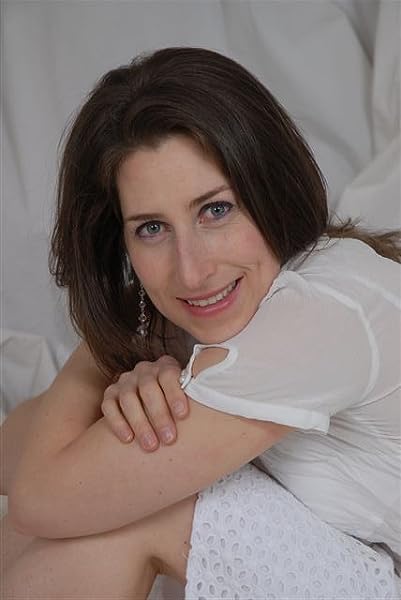 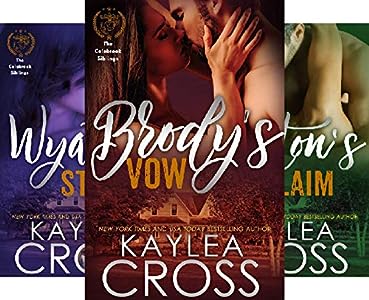 4.6 out of 5 stars
4.6 out of 5
174 global ratings
How are ratings calculated?
To calculate the overall star rating and percentage breakdown by star, we don’t use a simple average. Instead, our system considers things like how recent a review is and if the reviewer bought the item on Amazon. It also analyzes reviews to verify trustworthiness.
Top reviews

Bookaholic
2.0 out of 5 stars Nothing Special
Reviewed in the United States on September 12, 2016
Verified Purchase
I have enjoyed many of Kaylea Cross' books which is why this novel was such a shock. Having already established Trinity as a secondary character in a previous series, a story about this female assassin should have been great. Instead there was a very basic plot, insta-love, and little character development. At just under 200 pages this was a very quick read with an incomplete novella feel. It was a disappointment the first time around and not a book I would bother rereading. If you haven't read anything by this author, don't start with this book.
Read more
22 people found this helpful
Helpful
Report abuse

Alex
4.0 out of 5 stars Great start to a new series!
Reviewed in the United States on July 26, 2020
Verified Purchase
Brody's Vow starts a new series but brings us some familiar faces since we've met both Trinity and Brody in prior books. I really liked this one and even though Brody and Trinity don't sleep together until almost 80% I never really noticed a lack. There was plenty of action to keep the story going at a fast pace and there's still plenty of emotional intimacy between Brody and Trinity as they build trust between them. With Trinity's background, trust doesn't come easy and she's leery of Brody at first. As an orphan Trinity was recruited to a secret government program, The Valkyries, and trained to be an assassin. Unlike some of her "sisters" Trinity kills up close and personal and is trained as a femme fatale who can seduce her targets. She's never really known what it means to have a man treat her with respect nor has she really enjoyed sex for herself.

Brody is the perfect match for Trinity because he's a protector while also respecting Trinity's strengths. He wants Trinity to have a better life where she's not manipulated by a government who doesn't care about her personally but he never tires to direct her life. While this is all going on Brody is recovering from a gunshot wound on his last mission that left him with an injured leg. Overall, this plays a minor role in the story but this recovery is the set up for Brody returning home to visit his family. We only meet one of Brody's brothers, Wyatt, but I'm really intrigued by him and his story!

Together, Brody and Trinity make quite the power couple and while they fall for each other quickly, their devotion is beautiful. Both of them know that life is short and when you find someone who understands you, even the sharp edges, you should grab on and never let go.
Read more
Helpful
Report abuse

Phe
3.0 out of 5 stars 3.5 Stars
Reviewed in the United States on September 12, 2019
Verified Purchase
If you’ve already read the author’s Hostage Rescue Team series, then you’ll be familiar with the main characters in the first book of the Colebrook Siblings trilogy. If you haven’t… no worries. This book can easily be read as a standalone.

Trinity Durant is one of the deadliest Valkyries, getting up close and personal for her kills. A government trained assassin, she isn’t accustomed to relying on anyone for help. But when she’s injured on a job and needs to escape D.C., she reluctantly accepts help from a member of the FBI’s Hostage Rescue Team when he discovers her hiding in his commander’s house.

On medical leave following a series of surgeries and rehab stints after being wounded during an op in northern Jordan, HRT sniper team leader Brody Colebrook is headed home to the Shenandoah Valley for a much deserved break when he’s called upon to investigate a disturbance with his commander’s home alarm system. The last thing he expects to stumble upon is a mysterious woman in danger, and now that he knows she’s in trouble, he can’t just leave her to be hunted down and killed. But the moment Brody puts Trinity in his truck it places them both in the crosshairs of a ruthless killer bent on revenge.

BRODY'S VOW was a well-written, sexy story that leaned more toward romance than suspense. There was a bit of action and some dangerous elements, but overall the story doesn’t have the same sense of suspense that the author’s Hostage Rescue Team series or Titanium Security series does. With that said, the storyline was engaging and both Brody and Trinity were strong, likeable characters. I look forward to reading about Brody’s brother, Wyatt, next.
Read more
Helpful
Report abuse

RedEnigma
5.0 out of 5 stars Brody's Vow
Reviewed in the United States on March 1, 2019
Verified Purchase
Kaylea Cross is one of my favorite writers when it comes to romantic suspense. Brody's Vow was fast-paced, sexy, and hit all the right notes. I loved how stubborn and resilient both Brody and Trinity are. Trinity was determined to handle all her problems on her own, but Brody was just as determined to prove to her that she didn't have to.

Trinity truly deserved to be happy, even after everything she'd been through in her life made her believe otherwise. It takes a special kind man to show a woman that not all men are scum. Brody showed Trinity over and over again that he was definitely that man. I loved seeing how Brody's kindness, loyalty, protectiveness--just him being him--broke through that carefully constructed armor Trinity built around her heart.

I loved the action and dangerous elements in this story. It definitely kept me on my toes. The bad guys were sleazy scum and oozed creepy criminal without getting too much into detail. Don't get me wrong, I don't mind all that. I just thought I'd point out that Ms. Cross did an awesome job painting a picture of the bad guys that had a way of making you shiver with disgust even without all the normal graphic details.

I loved the family dynamic Brody has with his Dad and his brother, Wyatt in this story. They may be gruff, retired military men, but they'd go to war for each other. As a matter of fact, I'm looking forward to reading Wyatt's story.
Read more
One person found this helpful
Helpful
Report abuse
See all reviews

Amazon Customer
2.0 out of 5 stars Not appealing
Reviewed in the United Kingdom on July 20, 2019
Verified Purchase
Read wyatts stand first which I enjoyed so I bought this one. Big mistake, even though it was free. Loads of issues e.g. putting antibiotic cream on gash then gluing it which wouldn't work as glue wouldn't stick on cream, needs to be vice versa; family breed horses yet only have 60 acres, need bigger acreage unless only have a few horses, at the farm "intent on grabbing the bag she’d packed that held her pistol, extra ammo and a change of clothes." but where is rifle she had at Matt's house? The speed H/h connected was unbelievable. I also didn't find Trin being an assassin was appealing. I don't like cold blooded killing of "baddies", makes assassin equal to baddie. I must read blurb more carefully so I don't unwittingly buy this type of book again. I didn't like this book.
Read more
Report abuse

Guinevere
1.0 out of 5 stars Ugh!
Reviewed in the United Kingdom on February 21, 2017
Verified Purchase
SO disappointed in this book! I just finished the Titanium series which I LOVED! The action, the fleshing out of the characters, the relationships - ALL brilliant! I fell in love with each character. Imagine my shock when reading Brody' s Vow and being so bored by it. Yes, bored! I just didn't care about the characters and was actually quite pleased the book was incredibly short, rather than feeling cheated at the length, I felt relieved to be shot of it. There was hardly any back story to the characters and the speed with which they fell in love was ridiculous. Trinity was extremely annoying in her initial responses to Brody and I ended up not caring what happened to any of them. The bad guy had real potential but was so neatly disposed of it was ridiculous. Did someone else write this book? Not at all the Kaylea Cross standard of writing I know and love. Unless you're sitting in an airport bored out of your mind, don't touch the book!
Read more
Report abuse

Sandra Cameron
5.0 out of 5 stars Another great read. Kaylea Crossbat her best.🌟🌟🌟🌟
Reviewed in the United Kingdom on July 29, 2016
Verified Purchase
Wow!!! Another great book from Kaylea Cross. Have waited ages to get my hands on this book. Fast paced right from the start. It kept me on the edge of my seat that I had to read it right through. Trinity has hard life and doesn't trust many people except the othe Valkyries , but Brody manages to get through her tough exterior . He was brought up by his marine father with a sister and two other brothers. He's a gentleman. But he had Trinitys back always!!! Good to see the HRT make an appearance. And of course the lovely grits ( PJ). Look forward to reading Wyatts story. This is a great read and 10/10. Go out and buy it, you won't be disappointed . Sandra Cameron.
Read more
Report abuse

Doubledoodles
5.0 out of 5 stars Seriously good spin off Ms Cross
Reviewed in the United Kingdom on May 19, 2017
Verified Purchase
Another fab series from Kaylea Cross. Anyone need a reason to binge read, here's a great spin off you'll just love, linked to the HRT series, this picks up characters you've been curious about since you met them in HRT. This is Brody and Trinitys story, how fate conspires to bring them together, the twists, turns and HEA.......not spoiling it read the book, noooo read the whole series you will love it!
Read more
Report abuse

lq
4.0 out of 5 stars Good read
Reviewed in the United Kingdom on October 4, 2018
Verified Purchase
I recently found this author in a anthology, and having enjoyed that book ( the second in this series ), I bought this book and also the third one.
I'm glad I did, I have enjoyed reading this and look forward to the next.
Read more
Report abuse
See all reviews