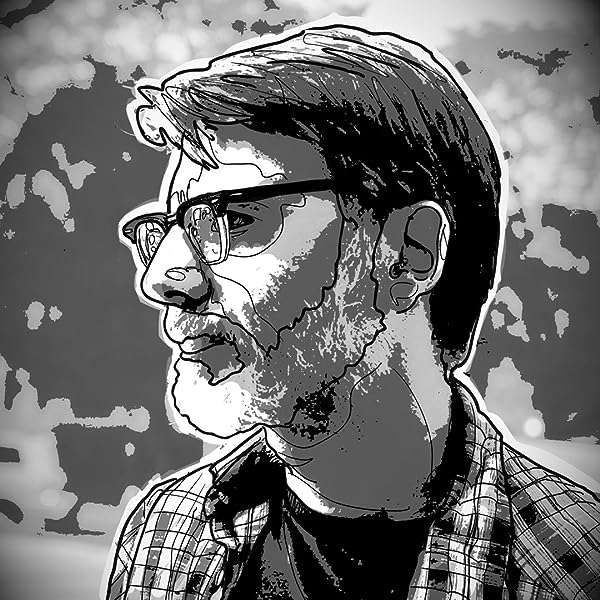 "A rollicking, careening adventure... Pappalardo has created a world, and a book, unlike any other." -- Foreword Reviews

​"An engaging, gonzo novel with classic illustration elements and a large dose of silliness... If you expect a serious adventure, you're reading the wrong book." -- Bleeding Cool

"It is intelligent, entertaining, and in a word, freaking awesome." -- Broken Frontier

Tom Pappalardo is a graphic designer, illustrator, animator, and author. He lives in a manky old house in western Massachusetts with a little cat named Charlie.

Start reading Broken Lines on your Kindle in under a minute.

lisaleo (Lisa Yount)
4.0 out of 5 stars good gonzo fun, eventually pretty likeable
Reviewed in the United States on March 24, 2018
Okay, this book is about a waitress named Maggie, who—after demon “firemen” burn down her trailer-park home, just because they can—ends up on a road trip with a Cowboy, a Spaceman (no, not refugees from Toy Story), and a Vampire. They don’t walk into any bars, but they do walk into a lot of diners and drink (or at least talk about) an awful lot of coffee.

If Carl Hiaasen had decided to write a graphic novel of sorts (not comic-book format throughout, but with a fair number of black-and-white illustrations and a great deal of playing with type fonts) and had gotten Terry Pratchett’s ghost to write footnotes for it, it might have come out something like this. To be sure, it probably would have had more involving characters and have gotten funnier sooner than this does. Pappalardo isn’t Hiaasen and/or Pratchett, but then again, neither are the rest of us, so I can’t blame him for trying.

The book did eventually have some good humorous bits and did eventually make me care about the characters, though that didn’t happen with anybody except Maggie until fairly near the end. The fourth star, therefore, is something of an afterthought. Overall the book isn’t great, but if you like gonzo urban fantasy with a graphic-novel flavor, it’s worth a try.

Jennifer R.
3.0 out of 5 stars More questions than answers.
Reviewed in the United States on January 4, 2018
I won an advanced readers copy of this novel. Basically, I had a very small window of knowledge as to what I was getting myself into here. Supernatural elements and humor, according to the rear cover, with plenty of illustrations. Mmkay.

Well. I certainly found myself laughing long and hard at some of the trials faced by our ragtag quartet of protagonists. Let it be said they all had guts in the face of some scary-ass axe-wielding antagonists. The author did nothing to allay my fears of gas masks; thanks a lot.

So, immediately dropped into the maelstrom, you can feel and almost smell the camraderie. Three men on what might be an existential journey rescue a woman ... and despite plenty of gory fight scenes, near-misses with death, and a bit of flirtation, you're left wanting, plotwise. Some of the illustrations and asides (text boxes with historical anecdotes or zany footnotes, plus sly advertisements) provide a tongue-in-cheek jab at more recent American culture (such as it is), yet it distracted me from the story. Too often it broke the flow. The food court scene at the mall obliterated it completely, which annoyed me no end. If I wanted to get meta with it, I'd pick up a copy of Philip K. Dick, ok?

By the end, I felt as though I'd been on a bit of theme-park tour with these characters. Certain pop-culture references, many of which I enjoy, popped in to make themselves known.

What would Iggy Pop and Exabayachay make of it, I wonder.
Read more
One person found this helpful
Helpful
Comment Report abuse

Amazon Customer
5.0 out of 5 stars Reviews of earlier incarnations of Broken Lines:
Reviewed in the United States on November 19, 2017
"It is so unlike everything else that I have ever read that I hate to make any sort of comparisons."
— BlogCritics Magazine

"...a classic oddity, full of strangeness and lunacy...a solidly creative effort."
— Comics Waiting Room
​
"It is intelligent, entertaining, and in a word, freaking awesome."
— Broken Frontier
​
"[Pappalardo] has steeped Broken Lines in various literary traditions that suggest he’s at least walked by a library or two, the sense of humor is truly absurd, and references to modern culture both high and low pepper the pages."
— Comic Book Bin
​
"I can’t remember the last time I was this impressed by a story where I had no real idea what’s going on."
— Optical Sloth

"...the design visuals just hooked themselves into my brain and are making me say Preeeetty."
— FLEEN
Read more
One person found this helpful
Helpful
Comment Report abuse

Noshadowjosh
5.0 out of 5 stars This is a fun story, uniquely told.
Reviewed in the United States on January 24, 2018
Imagine you’re twelve again, assuming you’re not 12 right now, but you’ve already been 12 at some point. You’ve got a lot going on. Your interests are beginning to mature. You’re really into space- astronauts, robots, space travel, etc., but you’ve also yet to let go of your earthbound heroes. The Cowboy with his six-shooters, riding in to save the day, square jaw jutting out against the dusty backdrop of the wide-open plains. But maybe you’ve discovered some new things, too. You’re a little older, more sophisticated- you’re not a kid anymore! You’ve found a taste for… darker things. Vampires, demons, evil conspiracies, acts of destruction. You like the fear of the unknown that you’ve discovered, and it makes you start to think about broader life concepts like good vs. evil, and finding your place in the world.

Now, assuming you’re a grown-up of some kind- don’t you miss all that a little? Wouldn’t it be cool if you could get back to all that, and better than that, get it all in one place? Well have I got a book for you.
Read more
One person found this helpful
Helpful
Comment Report abuse

Mister Reusch
5.0 out of 5 stars I absolutely love this book
Reviewed in the United States on January 16, 2018
I absolutely love this book. The plot, the characters the dialogue, the artwork.....it's one of those rare creations that immediately draws me in, intrigues me, makes me laugh out loud, and care about the characters, and worry for their well-being. It's exciting, funny, thrilling, scary, and really beautifully written. I've re-read it several times and always want more, but also feel that it's the perfect length. I think it begins at just the right moment and concludes when it should, and the story itself stays with me long afterwards. Really highly recommended!
Read more
One person found this helpful
Helpful
Comment Report abuse

Kindle Customer
5.0 out of 5 stars Gonzo Road Trip Novel - Must Read!
Reviewed in the United States on January 9, 2018
It's like a graphic novel in that there are pictures that go with the novel, and the pictures are as weird as the story. And by weird I mean fantastic. Who doesn't love a space cowboy? Highly recommended.
Read more
2 people found this helpful
Helpful
Comment Report abuse
See all reviews