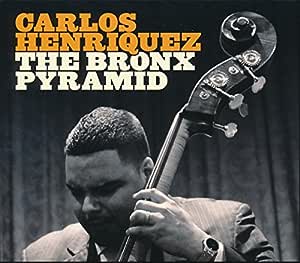 Carlos Henriquez (Artist) Format: Audio CD
4.9 out of 5 stars 33 ratings
See all 7 formats and editions Hide other formats and editions
Includes FREE MP3 version of this album.&nbspProvided by Amazon Digital Services LLC. Terms and Conditions. Does not apply to gift orders.&nbspComplete your purchase to save the MP3 version to your music library.
Available at a lower price from other sellers that may not offer free Prime shipping.

Carlos Henriquez's THE BRONX PYRAMID marks the Bronx-born, Nuyorican bassist's first album as a leader and the emergence of a fully fledged Latin jazz master. Joined by guest stars Rubén Blades and Pedrito Martinez and band members including drummer and fellow Jazz at Lincoln Center Orchestra member Ali Jackson, Henriquez expertly blends modern jazz with Latin rhythms, demonstrating why he's been performing with greats like Tito Puente, Eddie Palmieri, and Celia Cruz since he was 14.

When Henriquez's high school band won the inaugural Essentially Ellington competition in 1996, he came to the attention of Wynton Marsalis, who took the bassist on the road shortly after he graduated high school. Since then, Henriquez has toured the world with the Wynton Marsalis Septet, Chris Botti, and the Jazz at Lincoln Center Orchestra. On THE BRONX PYRAMID, Henriquez expertly combines the best of the Latin and jazz traditions into an infectious album that will make you move no matter your favorite genre.

"Henriquez pushes his voice to the fore, and what he has to say is powerful... it is a real pleasure to hear him front and center. This latest disc, the second release for the JLCO-affiliated label Blue Engine, proves why he is an emerging master in the Latin jazz idiom. --DownBeat