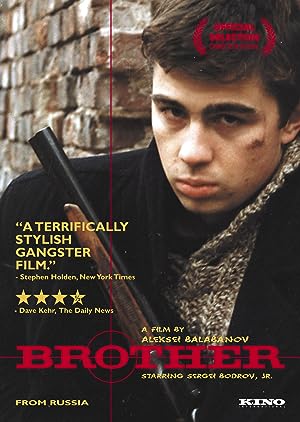 (289)
7.81 h 35 min199818+
Danila returns from his army service and is unemployed. On his mother’s advice, he leaves for St Petersburg where his older brother Viktor has been making good money. However, when he finds him, Viktor turns out to be a contract killer. Soon, Danila agrees to carry out an assignment for him.

Morgana1986Reviewed in the United States on December 12, 2007
4.0 out of 5 stars
An interesting film.
Verified purchase
Well it was ok.

It starts out with Danila he wonders onto a movie set, he gets into trouble for it. As it turns out, he recently returned from the war. And his mother seems to admire his big brother more then him. Well anyways he goes to St. Petersburg to live with his brother. There he meets all sorts of people. He makes friends with a homeless German, with a female drugee, and he makes love to a married woman, who not only becomes his misterss, but whose husband also abuses her. He also likes music a lot too. See there's some redeming qualities right there!

Not recommended for children at all!

Michael GriswoldReviewed in the United States on October 27, 2010
4.0 out of 5 stars
Our Universal Brother of Truth
Verified purchase
Brother- a Russian film from 1998 is based around Danila a twenty something Russian who has just come back home from army service to find a Russia where corruption and mob activity rule the state and the citizenry is engaged in the new culture of consumption and buying material goods that has consumed many societies. Within this society Danila struggles to find his place assisting his brother as a contract killer offing Chechens and other bad guys, while showing compassion towards the little people unable to fight back against an often corrupt and unfair system. Danilla serves as a shades of gray hero-villian that often mark all modern societies because while humanity looks for absolute good or evil, persons exist within shades of gray. There's a certain universality within this story about struggling to find a role within this new alien world for themselves where everything you think is certain, is really nothing at all. Human relationships can and often do change at a moments notice depending on situations and circumstances.
4 people found this helpful

Wichita ManReviewed in the United States on September 2, 2009
5.0 out of 5 stars
Beneath the Violence
Verified purchase
"Brother" is somewhat gory. However, beneath the bloody surface, Alexei Balabanov explores some of the consequences of compulsory military service for the young men of Russia; those who cannot use privilege to avoid it. The paradox of Sergei Podrov's character, Danila Bagrov, is that while he insists that he stayed in Army Headquarters for the duration, his many regular and unconventional military talents are revealed. He is somewhat of a latter-day Russian version of "McGyver". This in contrast his brother Sergei, played by Victor Sukhorukov (Poor Poor Pavel). Sergei is a coward, who throws his brother to the wolves, as gangs battle for control of a market in Moscow. Sergei never expects Danila to survive. In the end, when it is obvious that Danila has vastly more courage, resourcefulness and strength of character, Sergei begs for his life. It is unnecessary. Danila continues to forgive his brother and shows compassion for those in need, while being ruthless with others of evil intent. Balabanov explores the realities of life in the undercurrents of Muscovite society as people just try to survive post-Soviet society. Survival is a matter of character, not how many weapons one possesses.
6 people found this helpful

SandsReviewed in the United States on June 20, 2020
4.0 out of 5 stars
Do you have tickets?
Verified purchase
This film very amazing and interesting, it doesn't have alot of action if ur one them but it takes u around the post Soviet world in Russia in the 90s to give a bitter taste and that's why I love it

KGReviewed in the United States on September 17, 2011
4.0 out of 5 stars
An interesting, dark, grim, noirish thriller
Verified purchase
Set in St. Petersburg, where the fall of communism has led to a sort of wild west anarchy
between competing sections of the Russian mafia.

Into this steps a young man fresh out of Army service, who comes to stay with his older
brother who (as it turns out) is himself a hit man. Before long, the younger brother has
taken over for the older, and is coolly and efficiently killing off targets and double crossing
bosses alike.

Sort of a combination art film and gangster action film, this never does much more than entertain,
and there's a certain phony James Bond quality to some of the violence.

But it's never dull, and has some nice subtle touches, wry commentary on the ruthlessness
of capitalism and the 'free market' taken to the extreme, and solid performances.
4 people found this helpful

AlondraReviewed in the United States on April 15, 2021
5.0 out of 5 stars
Unforgettable Russian film
Verified purchase
This movie has changed the way I view movies. I love the story, characters and music in this film. No time was wasted during my viewing of this movie. RIP Sergey.

Eric SatermoReviewed in the United States on May 7, 2021
5.0 out of 5 stars
Very good movie
Verified purchase
This movie is a classic and perfectly encapsulates what Russia was like after the collapse of the Soviet Union and is a great movie night movie.

Robert Michael RogersReviewed in the United States on November 15, 2010
4.0 out of 5 stars
BROTHER
Verified purchase
BROTHER by Alexei Balabanov is, as the cover says, a stylish gangster film set in St Petersburgh as the Soviets are falling from grace and a state of anarchy. Sergei Bodrov Jr. plays the part of a soldier returning from National Service (was is a boring office job or something somewhat more sinister).
He seeks his elder brother only to find him enmeshed in a life of crime and murder. Our hero turns on a tough guy performance 'par excellence'. Balabanov's direction is taut and memorable. I particularly liked the 'fade to black' between sequences over the sudden 'quick as a blink' style so popular.
This is not a film for the squeamish despite the absence of the vile graphic depictions in American films of this genre.
See all reviews
Back to top
Get to Know Us
Make Money with Us
Amazon Payment Products
Let Us Help You
EnglishChoose a language for shopping. United StatesChoose a country/region for shopping.
© 1996-2022, Amazon.com, Inc. or its affiliates