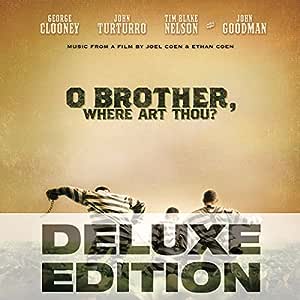 Various Artists Format: Audio CD
4.7 out of 5 stars 2,379 ratings
See all 23 formats and editions Hide other formats and editions
Includes FREE MP3 version of this album.&nbspProvided by Amazon Digital Services LLC. Terms and Conditions. Does not apply to gift orders.&nbspComplete your purchase to save the MP3 version to your music library.
Available at a lower price from other sellers that may not offer free Prime shipping.

Bluegrass became pop music for a while when the soundtrack to this 2000 Coen Brothers film became one of the 10 top-selling soundtracks ever. Here's the complete T-Bone Burnett-produced soundtrack plus a CD with 14 more tracks, 12 of which are unissued recordings made during the original sessions for the film! Includes O Death Ralph Stanley; Down to the River to Pray Alison Krauss; Keep on the Sunny Side Whites; Big Rock Candy Mountain Van Dyke Parks; Angel Band Stanley Brothers; In the Jailhouse Now Soggy Bottom Boys; I Am Weary, Let Me Rest Cox Family; You Are My Sunshine Norman Blake; Hogfoot John Hartford, and more.

4.7 out of 5 stars
4.7 out of 5
2,379 global ratings
How are ratings calculated?
To calculate the overall star rating and percentage breakdown by star, we don’t use a simple average. Instead, our system considers things like how recent a review is and if the reviewer bought the item on Amazon. It also analyzes reviews to verify trustworthiness.
Top reviews

Allen SmallingTop Contributor: Classical Music
TOP 500 REVIEWER
4.0 out of 5 stars "I am a man of constant sorrow" ~~
Reviewed in the United States on August 2, 2018
Verified Purchase
Call it Bluegrass, Hillbilly or White Gospel, the tunes on this soundtrack-style album based on the hit movie O BROTHER, WHERE ART THOU? are either vintage and authentic, or modern and authentic. Younger listeners may not realize the stir the movie and this album created when they were released because this subgenre of American Folk had been ignored by the national mainstream for many years prior; so much so that fans-in-the-making were known to go into record stores asking for 'some of that O BROTHER, WHERE ART THOU? music.' And here it is still! Even the singers are authentic to the film, except that George Clooney's voice had to be dubbed. My only real gripe is that the mixture of scratchy monaural recordings from the Thirties and modern multitrack recordings from the turn of this century makes for uneven sound quality. Still, well worth having.
Read more
12 people found this helpful
Helpful
Comment Report abuse

A Kansan lost in Texas
1.0 out of 5 stars One record is to large to play on some players
Reviewed in the United States on June 3, 2017
Verified Purchase
This review is for the 12 inch 33 1/3 RPM vinyl version of this album. It does not reflect the actual content of the songs, but the physical albums itself.

The problem is with the size of the 1st of the 2 records in this set. When I first received it, the first record was slightly larger than the standard 12 inches that most 33 1/3 RPM long playing records are. This created a problem with my Pioneer PL-990 player as the side of the record would rub up against the stylus arm rest, preventing the record from spinning. The second record of this set is the correct size, and has no problems playing at all. After reading the reviews on Amazon's site, I saw nobody complaining about this problem. So I decided to exchange this for another.

However, the second album set I received had the exact same problem. I am now of the opinion that this is a problem with the manufacturing of the album. Instead of returning the album to Amazon.com, I am currently trying to contact Universal Music to try and determine if this is by design.

Jeff
5.0 out of 5 stars Wonderful quirky olde timey melodies
Reviewed in the United States on February 2, 2019
Verified Purchase
O Brother Where Art Thou is yet another amazing movie by the Coen Bros and this soundtrack is full of marvelous melodies and authentic olde timey songs to salve the weary souls. This double-LP is NOT in a gate fold jacket, but it's still a quality pressing.

Best git on this here vinyl before, you know... it R.. U.. N.. N.. O.. F.. T.. and you can't find it no mo. It's a classic vinyl all bone a fide record lovers will cherish having in the collection. You'll be having sing-a-longs to The Man Of Constant Sorrow before you know it.

There. I've spoken my peace and counted to three.

Macforlife
5.0 out of 5 stars O Brother--don't miss buying this movie soundtrack! You won't regret it!
Reviewed in the United States on June 27, 2015
Verified Purchase
I purchased this after seeing the movie on DVR for the umpteenth time. The "Soggy Bottom Boy's," singing "into the can," made me die with laughter!. The old blind dude at his radio station was looking for some "Old Timey Music!" "I'm a Man of Constant Sorrow" almost sent him into an apoplectic fit! His eyes rolled upwards in pure delight and he handed out ten dollar bills to the boys. (More than he should because they took advantage of his blindness and added a few more performers! Chris Thomas King singing "Hard Time Killing Floor Blues," at the campfire mesmerized me. I bought two of his CD's from Amazon because of this. As is often the case, nothing compares with King singing "Hard Time Killing Floor Blues." That is a haunting song--made more so by King's soulful voice and playing. I could only find it in the movie soundtrack and none of King's CD's. There are too many great songs to list on this soundtrack--the recording quality is superb.
Read more
12 people found this helpful
Helpful
Comment Report abuse

mary fugate
5.0 out of 5 stars A con is a con, unless of course the con is Clooney!
Reviewed in the United States on April 18, 2018
Verified Purchase
I've seen this movie so many times since buying it I almost know it by heart! I love the music!! Old timey like me. There is a good story line here, and the movie is very funny. George Clooney and pals are wonderful inept cons on the run, and the mischief they get into is too good to be true. Throw John Goodman in for good measure and it's priceless, and the music makes it all worthwhile.
Read more
2 people found this helpful
Helpful
Comment Report abuse

Bruce
5.0 out of 5 stars Traditional Bluegrass/Country Music Covered the Right Way
Reviewed in the United States on November 22, 2014
Verified Purchase
OK, you're watching a movie and like the music so much, you wish they'd stop the dialogue so you can listen to the songs!

Producers got it right by hiring a "who's who" list of musicians & vocal artists to cover traditional songs like Stanley Brothers "I'm a Man of Constant Sorrow" and others.

Decent CD player & a pair of headphones and you can actually hear the echo from that pitch perfect four part harmony.

As others have said, it's a great disk or it wouldn't still be in production after 16 years. (Wouldn't have won a Grammy either.)

The CD is also a great introduction into traditional or 'roots' country/bluegrass music. Want to more of the same style music? The enclosed 22 page booklet points you in the right direction.
Read more
6 people found this helpful
Helpful
Comment Report abuse

Alex Eye
5.0 out of 5 stars Finally, I Broke Down and Bought It
Reviewed in the United States on February 17, 2014
Verified Purchase
Many people bought this excellent soundtrack album because they appreciate the excellent movie. However, many others bought the album because, like me, they appreciate the songs, the artists, and the production's high quality. This collection is a standout on its own as an "album", in addition to being a "soundtrack".
For me, it was one of those instances where I told myself, "I love that album. I gotta get it." And "...gotta get it." turns into "someday".
And then one Sunday we sang "Down to the River to Pray" in church. That did it.
For those folks who appreciate gospel, folk, country, blue grass, etc.
And then there are those folks who bought the album, and then told themselves, "I gotta get the movie."
L Boyd
Read more
4 people found this helpful
Helpful
Comment Report abuse
See all reviews

Mole
5.0 out of 5 stars Music from the film - both really excellent
Reviewed in the United Kingdom on March 29, 2012
Verified Purchase
The film "O Brother where art thou?" was really quite superb. Part of its appeal was the music; a selection of 'old-time' ballads from the USA of the period of the Great Depression. This album contains some of the more popular tunes from the film and they are a mixture of Country & Bluegrass with a smattering of Blues & Religion thrown into the mix.

Most of the music is from the 20s and 30s although they are more modern recordings of the various songs. The tracks were recorded in such a way as to make them seem authentic for the time, and give them the 'feel' of the period. This really appealed to me, although I can see that some others might not find it so enjoyable.

If you like Country music, you will probably recognise some of the artists, and you will almost certainly enjoy this album. Even if you are not a C & W fan, you may well still enjoy it.
Read more
One person found this helpful
Report abuse

M. Ives
3.0 out of 5 stars Great music, let done by cheap presentation
Reviewed in the United Kingdom on March 21, 2016
Verified Purchase
The music content was absolutely fine. Great soundtrack and highly recommend if you like that sort of music.

However, my gripe is with the physical albums itself. There are 2 LPs and as such you would think they would come in a double sleeved jacket (one LP each)....but no. This goes beyond cheapness. Both LPs are sandwiched into 1 sleeve. One of the reasons (and there are many) people buy vinyl is because you usually get good quality jackets to house and protect the LPs.
Read more
One person found this helpful
Report abuse

John Doe
1.0 out of 5 stars Waste of money
Reviewed in the United Kingdom on December 10, 2019
Verified Purchase
Very disappointed with this, the last 2 tracks wouldn’t play properly and when turned off it restarted at the beginning . Didn’t return it as not fit for purpose as didn’t play it for a while and had gotten rid of all packaging
Read more
Report abuse

Vintage life for Real
5.0 out of 5 stars great classic old time country cd
Reviewed in the United Kingdom on December 10, 2018
Verified Purchase
had this on repeat for like 1 week, there is some beautiful calming songs/chants, and some nice upbeat, and of course the deep dark songs too which i love them all
also partner now has had constant sorrow for his ring tone for like 4 months now ! :D
Read more
Report abuse

Graham
2.0 out of 5 stars Oops
Reviewed in the United Kingdom on January 8, 2019
Verified Purchase
Followed the link to buy the DVD of Oh Brother, and ended up with the soundtrack album! Not bad, but not what I thought I'd ordered. Will be a lot more careful in future.
Read more
Report abuse
See all reviews